The correct selection can help keep costs down.

The manufacturing of solar cells is one of the fastest growing power-generation segments in the world. Playing an enhanced role with respect to this trend is the total cost of producing solar-cell materials. Unscheduled shutdowns that result in production downtime can quickly accumulate into higher solar-cell production costs and affect the overall bottom line. Choosing the correct industrial process solutions to improve efficiencies and avoid downtime can help keep costs low. Therefore, every component must contribute in a positive way to a solar-cell plant's operation, including the industrial pumps that do much of the heavy lifting during the stages of the production process.

Although selecting the correct pump for each application during the solar-cell production process is important, this has never been truer than during the wafer-creation phase. While this phase of the process is precise, it can also be harmful to pumping equipment and push a pump beyond its maximum capability. A pump that has not been specifically designed for this type of demanding application can require unwanted maintenance and downtime.

One of the many reasons that pumping equipment is pushed to such extreme measures during the wafer-creation process is because of the abrasive slurry that is used during the cutting process. 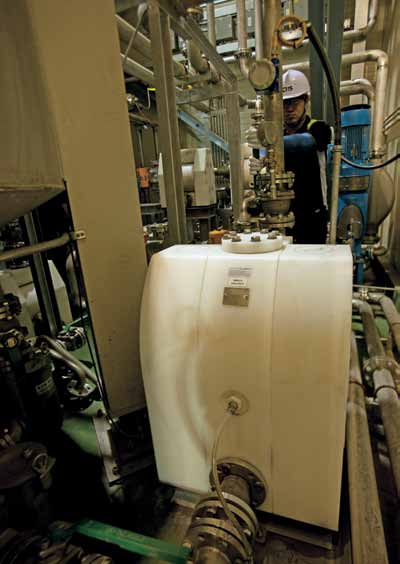 Solid body, air-operated double-diaphragm (AODD) pumps offer many advantages during the production of solar cells, especially in the wafer-creation phase.

Eventually, the slurry becomes polluted by silicon particles, iron and other byproducts from the sawing process. This pollution makes the slurry unusable. Since the slurry is one of the more expensive costs during the solar-cell production process, rather than discard the slurry after use, many customers have invested in systems that use pumps to recover, recondition and reuse the slurry to help cut down production costs.

Selecting a pump that is designed to handle abrasive slurries is ideal for this application.

In addition to handling the slurry during the cutting process, pumps used during the wafer-creation phase must also achieve functional reliability during the etching and cleaning process.

During this process, abrasive liquids and sharp silicon particles must be continually drained, filtered and circulated by the pumping systems. Since this process is harsh, the pumps chosen to complete this task must have a solid construction and a high capacity to resist abrasion.

Through the years, a number of different pumps have been selected for use during the wafer-creation phase. However, many of the processes involve both wet and dry applications, and few pumps are well-suited for both. For example, pumps made with metal parts frequently corrode, and the sealing oil's lubricating properties degrade under the abrasive liquids and sharp materials associated with solar-cell production. Some pumps also pulsate during liquid transfer, which can interrupt or clog the flow of material, resulting in pressure spikes and, ultimately, leakage.

Since pump malfunctions and maintenance downtime add time and costs to solar-cell manufacturing operations, getting just the right pump for use during this phase is essential. Fortunately for those involved in the production of solar cells, a pumping technology is available that offers the design, materials of construction, energy consciousness and operational efficiencies needed for this critical application, solid body air-operated double-diaphragm (AODD) pumps.

Solid AODD pumps offer many advantages during the production of solar cells, especially during the wafer-creation phase. AODD pumps do not require electricity, are self-priming and can pump media ranging from wastewater to more viscous substances such as slurries and media with solids in suspension, such as the hard sharp silicon particle byproduct of the wafer cutting and cleaning processes. AODD pumps are also designed to operate in rugged applications where most other pumps fail.

With a solid body construction, these AODD pumps are more reliable and efficient and capable of handling the demands of working with slurry, all while having a long life cycle and few maintenance concerns. The mechanical machining of a solid plastic block is economical thanks to modern computer numerical controlled (CNC) technology that enables far tighter tolerances to be achieved than those pumps that use injection-molded parts.

This solid-body construction provides a wide range of advantages to the end-user, such as: 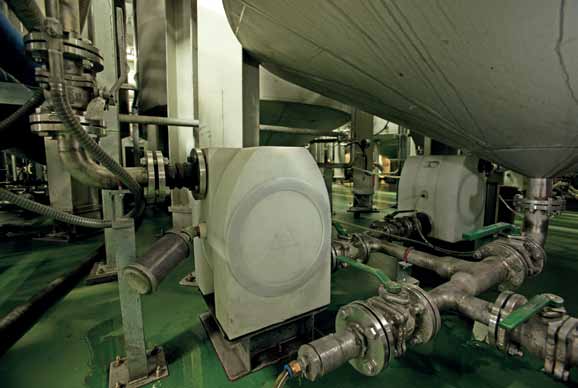 AODD pumps are ideal for harsh slurry applications thanks to a solid body design constructed with PE material, which has an abrasion resistance that is seven times higher than that of polypropylene and 1.6 times higher than steel.

The pump's structure allows all housing bolts to be tightened against a diaphragm-sized ring on each side of the liquid housing. This creates a greater and more even compression at the sealing surfaces, which results in increased safety.

Other critical parts of the pump's construction are the pump housing, valves and air valve. The pump housing can be made from many types of material. Some popular plastic materials of construction are polytetrafluoroethylene (PTFE), polypropylene, polyethylene and acetal. Stainless steel, aluminum and cast iron can also be used, but they are not as compatible with the chemicals and abrasives that are used in solar-cell construction. The pump's check valves are ball-type valves that fit snugly with the valve seat to ensure that the pump chambers are completely sealed. The air valve, which is sealed off from the pump chambers by the diaphragm, handles the variable displacement of air behind the diaphragm.

In addition, the characteristics of the AODD pump design offer many other benefits, including:

AODD pumps are self-priming and provide gentle displacement of fluids. The compact, solid design makes these advanced AODD pumps easy to install and provide unattended operation with long service life. The pumps are easy to start up and also include an integrated muffler. Options such as a screw-on pulsation damper, draining system, barrier chamber system, diaphragm monitor, stroke counting and flange connection are also available in some models.

Solar cells are expensive to produce. They will also be expensive to buy, limiting the solar industry's growth potential. Selecting the right pump for use in solar-cell applications can help ensure that the production process is completed in the most cost-effective, error-free and efficient manner possible. Putting an end to undesired production downtimes that can incur enormous production costs is a must when the bottom line depends on it. When solar-cell manufacturers are looking for pumping solutions that they can totally rely on to be efficient and maintenance free, the clear choice is to use plastic AODD pumps.