Editor’s Note: As part of our ongoing series for our 25th anniversary year, this article published in January 1993 and written by James Netzel and Jon Hamaker of John Crane Inc., explained new technology to predict seal performance and improve design. Following the short excerpt below is a new article from the same company highlighting how computer aided engineering (CAE) is helping mechanical seals today.

Information developed from these programs ensures compliance to the most stringent environmental regulations, before a pump and seal are put into service.

Mechanical seals and mechanical seal technologies have evolved significantly since their inception in the mid-1930s. With the growing demand in a variety of challenging applications, there is a need for advancing computational technologies that are capable of analyzing critical applications and special designs. Technology development within and throughout the industry has had a positive impact on optimizing seal products. Some products that were designed using traditional computer aided engineering (CAE) tools are still running successfully in the field after more than 25 years, validating the technology behind CAE tools.

Finite element analysis (FEA) and computational fluid dynamics (CFD) tools are used to predict mechanical seal performance at operating conditions. Conventional engineering methods are complemented by these advanced computer-based simulation programs, allowing engineers to simulate the performance of mechanical seals under specific service conditions (see Image 1, page 96). When process upset conditions such as elevated pressures, temperatures or poor lubrication are encountered, excessive wear and leakage can result in reduced life or premature failure of the mechanical seal. Good practice dictates a seal to be analyzed at its true operating conditions using advanced mechanical seal modeling software. Some of the performance benefits of using these analytical tools are: 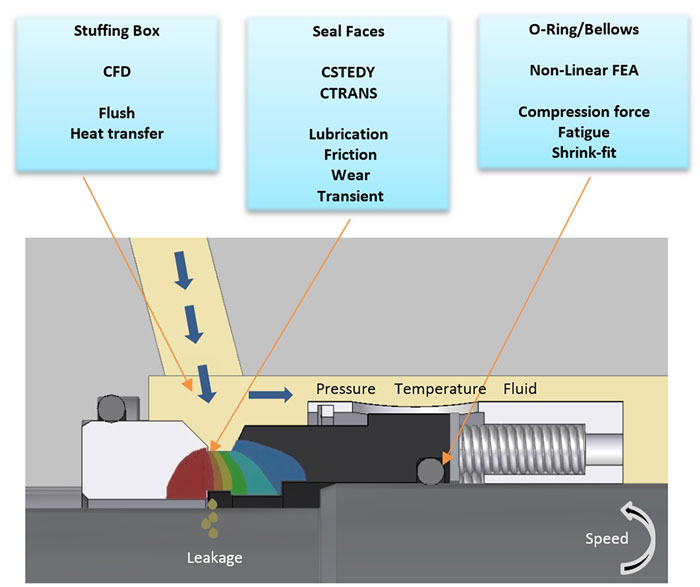 Finite element-based computer programs are designed to analyze the operation and performance of contacting and noncontacting mechanical seal faces. The seal analysis can be performed for steady state conditions for continuous operation or transient conditions that are time-dependent (see Image 2). 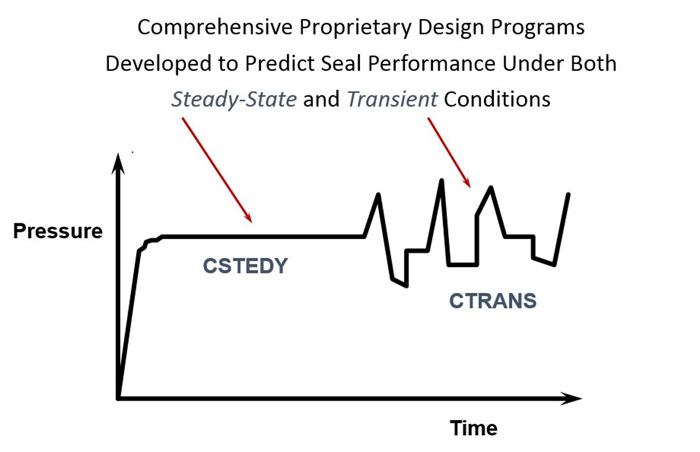 These programs take into account the combined effects of pressure and temperature distortions, sealed fluid properties, friction at the interface and seal faces conditions. The comprehensive mathematical/numerical models that predict face seal performance are based on first principles and empirical data. This specialized software includes many features that support the requirements for analyzing mechanical seals that are not typically found within commercial FEA software. 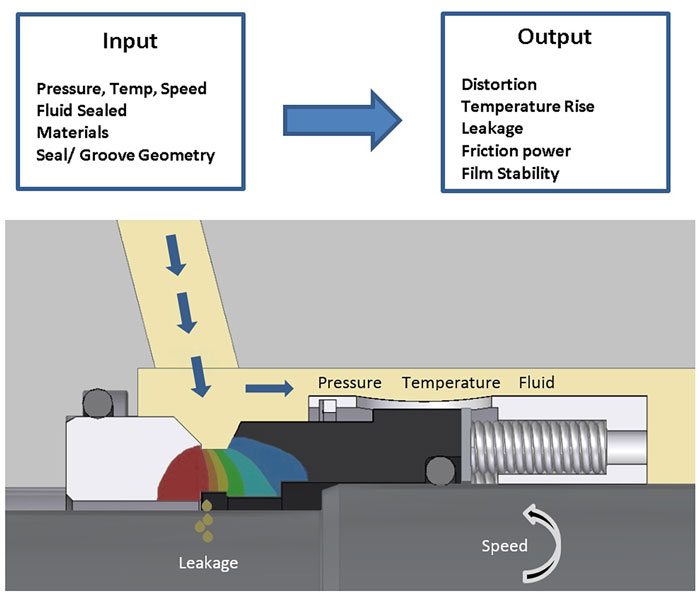 HF Applications
For certain applications, safety and reliability is of paramount concern. Pumps used in hydrofluoric (HF) acid alkylation units require a dual sealing system to minimize emissions. The use of a single cartridge mechanical seal in this hazardous service is not desirable, since any significant leakage past the inboard seal face could result in release of HF acid to the atmosphere.

One option is to use a mechanical seal design that incorporates a wet contacting seal as the primary seal, a noncontacting outward pumping gas seal as the secondary seal and the segmented carbon bushing sealing between the outboard seal and the atmosphere.

The recommended American Petroleum Institute (API) flush plan for this seal support system is API Plan 32/72/76. The primary seal uses a compatible clean flush media (Plan 32) of either isobutane or propane. The secondary seal is supported by a low-pressure purge of nitrogen (Plan 72) with the primary seal leakage vented to flare (Plan 76). The secondary seal face uses spiral groove technology, which is optimized by using the finite element-based computer program for steady state conditions.

The result is a unique sealing solution made possible by the use of an advanced analytical software. The noncontacting seal face grooves are designed to pump from the inner diameter to the outer diameter a small amount of nitrogen leakage into the flare system. Vapor leakage past the inboard seal is isolated by the nitrogen quench seal and all emissions are directed to the flare system, essentially eliminating toxic emissions to the atmosphere.

The spiral groove face seals operate using fluid mechanic principles. As the seal rotates, gas flows into the spiral grooves through a viscous shearing action and is compressed. At the sealing dam, gas is expanded. The combined film pressure results in an opening force greater than the closing force that separates the faces a few hundred microinches (see Image 4). The finite element-based computer program for steady state conditions was used to determine the number of grooves, groove depth, dam width fraction of face and spiral groove angle to predict optimum seal performance while ensuring outward pumping of dry nitrogen against the maximum flare pressure.

The use of these analytical tools to predict performance reduced the number of prototype tests, costs and time with a positive correlation of actual test results to the analytical tool’s predictions. This seal arrangement has been running successfully for more than 20 years in the field.

Sealing light hydrocarbons (specific gravity from 0.4 to 0.6) requires improved seal technology and tools to predict performance to meet the required VOC emission regulations. With a single seal configuration, plain faces in light hydrocarbon liquids can flash to a vapor. Though there is a sufficient vapor margin, the frictional heat generated at the face vaporizes the liquid causing the face to run dry and fail. 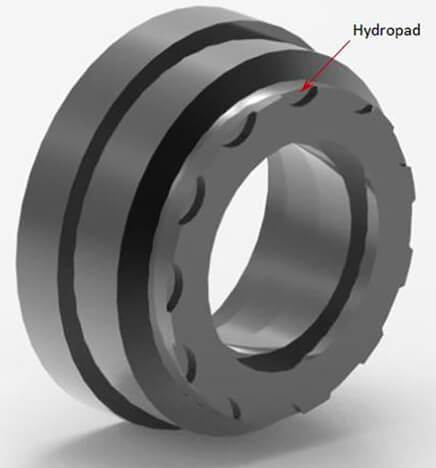 The preferred arrangement for these duties would be a dual-pressurized seal where pressurized barrier fluid lubricates the seal faces. Due to the remote location of the pumping station, scheduling preventative maintenance on the API Plan 52/53 is difficult. Single seals and dual unpressurized arrangement with dry contacting and noncontacting secondary containment seals are the seals of choice for pipeline services.

To enhance lubrication, hydropads are used as a face feature (see Image 5). They are typically used in light hydrocarbons and other services where vaporization occurs between the seal faces. However, they can sometimes produce high levels of leakage if the fluid film at the sealing interface is not effectively controlled.

Specialized hydrodynamic structures that use inlet and return microgrooves can be incorporated on the face. The inlet groove allows the process fluid to penetrate between the seal faces to create full film lubrication. The fluid within is dragged in a tangential direction by the sliding of the opposite face. The return groove collects excess film fluid and guides it toward the high pressure edge of the sealing gap (see Image 6). This allows for improved seal performance in low vapor pressure applications.

The finite element-based computer program for steady state conditions can be used to predict seal performance using these hydrodynamic structures and, if necessary, optimize the geometry of the ring and/or the grooves. The result of the design improvements increases film stiffness and creates a full fluid film at the interface with minimum changes in leakage. Image 7 illustrates the outputs of the program, showing the estimated fluid pressure and state. Retrofitting several problematic seals with these enhanced hydrodynamic structures resulted in increased mean time between repair (MTBR) intervals.

It is important to study the structural and thermal behavior of each seal component to estimate the longevity of the complete seal design. Individual parts or assemblies can be analyzed using CAE software, such as Abaqus and Ansys, which are based on FEA method. These tools offer solutions to engineering problems with linear or nonlinear behavior at steady or transient state conditions with complex interacting and contacting capabilities. 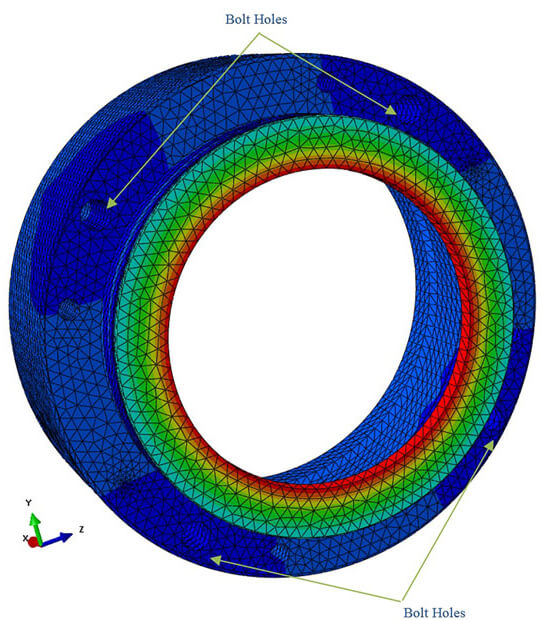 Image 8 shows the simulation of the gland at maximum box pressure to ensure the gland support surface displacement is not negatively affecting the seal face rotations.

The red color portion of the gland is the thinnest wall showing the maximum displacement from its original position. The deep blue color shows that there is no displacement at four bolt hole locations where the gland is fastened to the housing. A safe design ensures its maximum stresses and displacements are within its material and design limits.

For successful seal application, it is equally important to understand the fluid flow phenomenon in the seal chamber. In the real world, it is close to impossible to actually see the fluid flow pattern in an enclosed system. Using a CFD program with its advanced technology allows users to reliably model the fluid dynamics.

The CFD tool gives a great opportunity to design an optimum flow inducing device such as a pumping ring. Pumping rings come in various sizes and styles. Therefore, the CFD program comes in handy to estimate the flow and the pressure head generated by these devices before it is field installed. Based on the results, the engineer can make recommendations to ensure an adequate fluid flow at upset conditions, too.

These computerized technologies have been enhanced and improved over the last 25 years and serve as important tools in the design and development of mechanical seals, enabling engineers to further study seal performance under simulated service conditions.

Acknowledgement
Sincere thanks to our colleagues Tom Lai, Tsu Yen Chen, Tom Mowbray, Jim Wasser and Jorge Pacheco for their support and encouragement.

Prashanthi Tirunagari is a senior staff engineer at John Crane. She has more than 11 years of experience with John Crane in the design, testing, analysis and application of mechanical seals. She holds a master’s degree in mechanical and aerospace engineering from the University of Missouri.

Bob Letizia is a senior engineer with John Crane. He has more than 22 years of experience in the application and design of mechanical seals and related systems. He holds a Bachelor of Science in electrical/mechanical engineering technology from Rochester Institute of Technology. For more information, visit www.johncrane.com.