Seal failure is often a symptom of an underlying problem within the pump.
by Bob Goodenberger
John Crane
02/21/2018 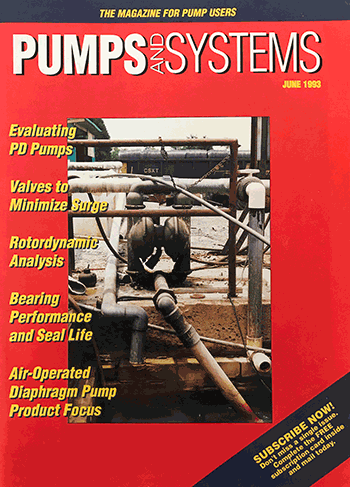 Editor’s note: In celebration of our 25th anniversary, Pumps & Systems is re-publishing articles from 1993, our first year in print. Below is the article “Effect of Bearing Performance on Seal Life” from our June 1993 issue. Bob Goodenberger, the original author, offered us an updated introduction and thoughts on how bearing performance and seal life have changed (or not) in the last 25 years.

Since the article titled “Effect of Bearing Performance on Seal Life” was written and published in June 1993, there has been no real change in the cause and effect of bearings on seals. There has, however, been a change in what end users are doing about it, which has caused a positive effect on the performance of seals and on the mean time between maintenance (MTBM).

Many end users have adopted improved vibration data collection on pumps. Today’s data collectors are easier to use than those of 1993, and in general are “smarter.” This gives a more direct reading of what is wrong and what might be done to correct the issue. This allows the ability to perform maintenance before a severe failure occurs—thus improving safety and the cost of repair. It also allows correlation between a high vibration period and process upsets that can lead to the avoidance of the high vibrations in the first place. Other improvements that contribute to improved MTBM are:

Other items that help increase MTBM include a focus on operation of the pumps, the reduction of emissions and some new technologies in seal design.

Technologies that are being adopted more and more by end users are affecting the life of pumps and seals positively. By updating pumps, seals, lubrication systems and controlling the flow through pumps more precisely, the amount of time that a pump spends in the field available for service and out of the maintenance shop is greatly improved. 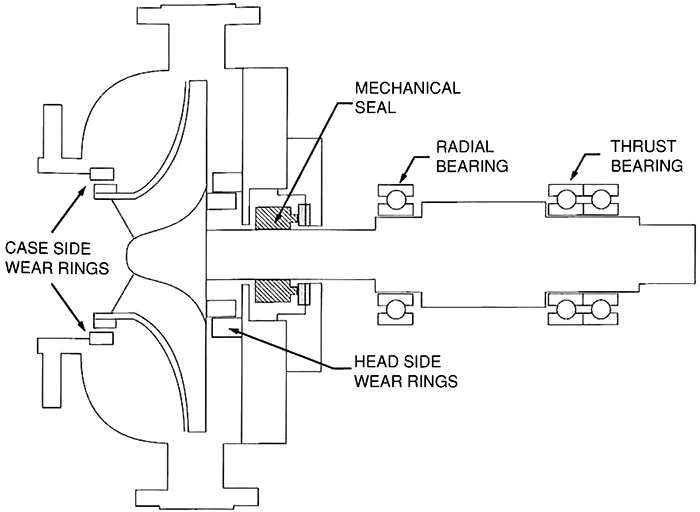 Mechanical seals play a role in containing emissions as well as providing a safe environment for plant personnel. Proper selection, operation and maintenance of the seal system are critical to good seal performance. Pump dynamics and bearing performance will also have an effect on seal performance (see Image 1).

Seal designs account for temperature, pressure, corrosion, wear and normal pump dynamics. All of these parameters must be within normal limits for the seal to operate satisfactorily. Pump dynamics include shaft movements—both radial vibration and axial movement (see Image 2)—and temperature changes. Temperature changes should be limited to normal process temperature swings. Temperature transients—swings from ambient to high temperature—should be avoided whenever possible, because this can cause thermal distortions and lead to wear and leakage. 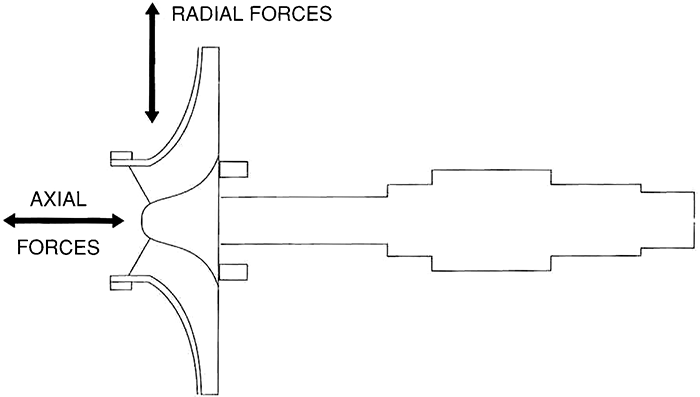 There are many times that pump dynamics are not as stable as the pump and seal designers would like. The result is that seal performance is affected, even though there may be other areas of the pump that are beginning to fail but are not recognized because the seal is more obvious. The more common dynamics that cause seals to leak are vibration, pressure pulsations and shaft movements. Any of these can directly cause the seal to leak. They may also cause the bearings to weaken and fail, which in turn causes the seal to leak or be damaged.

The bearings of a pump are the major support element for the rotor, and as such are also the major support element for the seal. When the shaft experiences a process load, either radial or axial, the force must travel past the seal before getting to the bearings, where the load is transferred to the housing and its support. Because the seal is closer to the applied load, it sees more movement than the bearing. By the time the bearing begins to fail, the seal may have been subjected to movements that exceed its normal design.

There are many causes for the loads on the bearings, and many are hard to detect. Seal leakage, however, is easily detected. This results in the identification of the seal as being bad, and no further investigation is performed to see if the leakage has some underlying cause.

Bearing overload is any load imposed on the bearing that is greater than the design load of the bearing. This load can be due to constant loading or constantly changing loads. Overload of the thrust bearing can be caused by changes in the flow, which changes the hydraulic pressure profile on the pump, or by changes to the pump hydraulics themselves.

One of the least understood causes of thrust overload is the maintenance of pump wear rings. Often when pumps are maintained, the wear rings need to be replaced. It often seems to be cost effective to machine one wear ring to clean up any wear, and to manufacturing a mating ring and machine it to match. However, this changes the hydraulic balance of the pump and may overload the bearings, depending on the original loads on them and the new loads caused by the changed rings.

An example of this wear-ring-induced load would be a pump with 300 psi differential pressure and an eye wear ring diameter of 6 inches. If over a period of years the case ring were cleaned up several times and the impeller ring were replaced to maintain clearance, the resulting diameter could be as large as 6.25 inches. If no other changes were made, this enlargement would result in a thrust change of 721 pounds. This could very well overload the thrust bearing, which could result in vibration or axial displacement of the shaft. Either of these could cause the seal to be less effective, and a “seal failure” would be the diagnosis, but the root cause would not be recognized.

One of the major causes of radial bearing overload is process control. If a pump is being controlled by a level either on the suction or the discharge side of the pump, there are often times when the flow through the pump is reduced below the minimum stable flow. This results in large radial loads due to high pressures on one side of the impeller. If this condition happens frequently or for extended periods of time, the radial bearing can be overloaded and fail. In this case, however, the radial displacement at the seal is greater than the displacement at the bearing, and the seal often drips or is damaged before the bearing failure is obvious.

Cavitation is another cause of bearing wear that affects the seal, both directly and indirectly. Cavitation causes high frequency pressure pulsations that destabilize the seal. This creates loads that are transmitted along the shaft to the bearings. Continuous cavitation in a high energy pump can cause the bearings to fail due to constantly shifting or high amplitude loads. These loads usually affect the radial bearing, but on some impeller designs the thrust bearing can also be affected.

There are many influences in a pumping system that cause seal leakage, and many times these have little to do with the seal itself. In an effort to increase MTBM, the investigation into the cause of seal failure often needs to go beyond the seal itself. The hidden causes need to be understood and corrected. Maintenance programs that are designed to find and eliminate the root cause of failures can reduce overall plant emissions, while at the same time increasing MTBM and decreasing cost and downtime.

Bob Goodenberger was regional engineer with John Crane in 1993, when this article was first published in Pumps & Systems. He is a graduate of Northern Arizona University where he received a bachelor of science degree in mechanical engineering. Goodenberger is now a sales representative at John Crane. He may be reached at rjgoodenberger@johncrane.com. For more information, visit johncrane.com.