Predictive monitoring of critical rotating and non-rotating equipment is important for successful plant operation. Two end users benefited from this type of real-time monitoring of their critical assets. They were alerted to small abnormalities that could have escalated to expensive interruptions, helping maintenance personnel take a more preventive approach.

In early October 2013, an analytics software solution detected a potential problem on the recirculation valve of a feed pump at a combined-cycle power plant.

However, the actual values were as high as 8.5 percent. The software support team discussed the issue with plant personnel on the next weekly call.

During the next several weeks, the plant’s employees and the software company’s support team jointly monitored the issue. In late October, the performance of the valve began to deteriorate rapidly, with differences between the actual valve position and the demanded valve position reaching values as high as 20 percent.

The underlying cause was found to be a failed converter on this valve. Because of the early warning of this valve failure, employees had an opportunity to plan their maintenance action. Plant personnel replaced the converter.

If this issue had not been corrected in a timely manner, it could have tripped the pump and caused unplanned downtime and an unexpected loss of production. Any unforeseen interruption in plant processes costs money in lost product and requires personnel to find and correct the problem.

In mid-August 2013, monitoring software at work on an oil and gas platform detected an increase on a combustion turbine’s lube oil tank level from its normal operating level of 530 millimeters to values above 590 millimeters.
Experts from the software provider company notified the end user of these changes during their regular weekly call (see Figure 1). 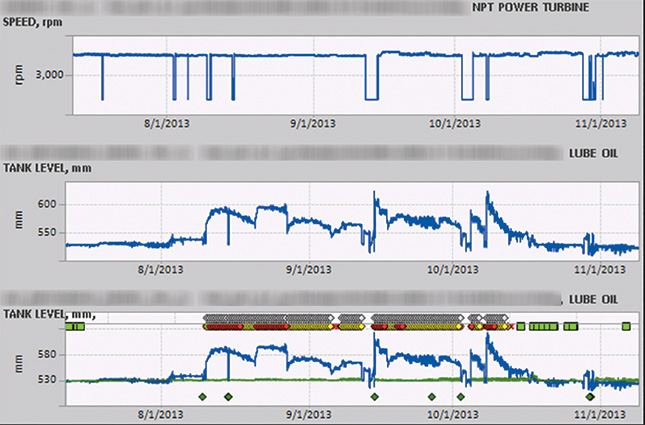 The user indicated that, as part of a temporary repair, the level sensor had been reattached to the tank with duct tape. Upon investigation, personnel learned that the tape’s adhesive had degraded, and the sensor was floating freely in the lube oil. In late October, the level sensor was permanently reattached to the tank, and the sensor began reading correctly.

A proper lube oil level is important to ensure bearing health. Because—unknown to the platform personnel—the sensor had detached, the level indicated to the user that more lube oil was available than what was in the system.

Eventually, this may have led to a situation in which the user had low lube oil levels without receiving alarm notifications. This faulty indication may have led to a loss of lube oil supplied to the bearings. Ultimately, this situation could have led to bearing damage, unnecessary maintenance and lost production costs. In the worst case, the combustion turbine may have failed, resulting in the hefty cost of replacement.

The move from reactive or predictive maintenance to the preventive monitoring of critical assets helps end users identify and solve problems before a time-consuming and costly fault occurs. Partnering with remote-monitoring technology experts can help end users manage installations with large numbers of process-critical equipment in real time, 24 hours per day.

Alan G. Hinchman is the global marketing director, Infrastructure, for GE Intelligent Platforms. He joined GE Automation Services in Charlotte, North Carolina, in 2000. He rejoined GE in 2007 as a global industry manager. Hinchman currently leads the strategic marketing team of GE Intelligent Platforms’ energy, oil and gas, water, and commercial building offerings. He has more than 15 years of experience in the oil and gas and municipal water industries. He may be reached at alan.hinchman@ge.com. For more information, visit ge-ip.com.

Valves
Valve Solutions for Mine Dewatering
Factors such as scaling, orientation and cycle time must be considered to avoid potential issues.
Valves
How to Avoid Valve Closure Water Hammer
The more gradually a system can slow its flow, the better a pressure surge is mitigated.
Valves
Ensure Safe Operation of Valves in High Pressure Applications
Understand how to maintain safety and reliability.
Valves
Spilling the Oil on Valve Quoting
A look at two-piece and three-piece ball valves and total cost of ownership.
Valves
Digitalization to Predict Reliability of Mechanical Valves
Monitoring valves on a regular basis can help avoid problems