Coker units thermally crack the residual oil (or bottoms) from an oil refinery’s vacuum distillation tower into smaller, low molecular weight hydrocarbons that are further processed or sold. The excess or residual hydrocarbons from this process are heated and then sold as petroleum coke, which is usually a high economic margin product.

Coking heater charge pumps transfer a continuous flow of process prior to the product stage, so any interruption would have a high economic impact on the unit margins and the refinery because other units will need to reduce the process to shift production.

The coker charge pumps at an Indiana refinery had a history of repeated failures from the 1990s through the end of 2011. Two pumps were in service—a turbine-driven pump and an electric-motor-driven pump.

The turbine-driven pump typically exhibited a longer time between repairs because it was used less often. The perception was that the turbine-driven pump also had a lower capacity threshold because it operated at a lower speed. These pumps normally have a pumping temperature of 560 F. They use an American Petroleum Institute (API) Plan 32 seal flush in which a lighter gas oil is used to cool the mechanical seals.

These high-temperature, two-stage diffuser pumps had mean time between repairs ranging between six and 12 months and failure modes almost equally divided between seal leaks and thrust bearing overload. During every rebuild, the pump cases regularly exhibited heavy erosion at specific points inside—the suction eye to vane edge, the vane end to diffuser end and around the divider plate between stages. 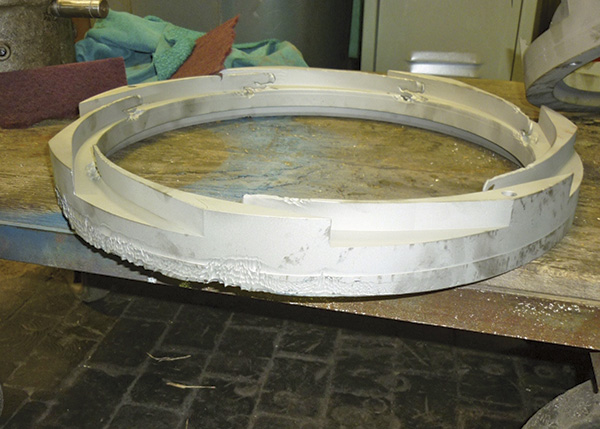 Throughout their history, numerous mitigation plans were completed that included modifying the impeller sizes and hardening both impellers and diffusers with different methods—including tungsten carbide coating treatment and boron diffusion. Thorough root cause failure analyses and multiple modifications were previously completed, but the pumps had already developed a reputation based on their performance and reliability. They were also known for inherent thrust issues with the equipment, which had never been addressed.

In early 2011, soon after undergoing a major rebuild, the motor-driven pump was commissioned and developed an outboard seal leak only two weeks later. This prompted an immediate shutdown. It triggered a field repair, and replacement seals were required.

During the seal change, the outboard bearing (thrust bearing) showed signs of skidding damage. The thrust bearing was a back-to-back pair of 40-degree angular contact bearings, which are susceptible to skidding on the unloaded bearing. The decision was made to install two 15-degree angular contact bearings back-to-back, which cannot tolerate as much thrust but do not have skidding issues.

The pump operated with these bearings for three months until a motor failure occurred. When the motor was removed, the pump shaft was hard to turn, and it was later determined that both inboard and outboard pump bearings were destroyed (melted, blackened and in pieces). These two subsequent failures and the future need for reliable crude units prompted an emergency deep-dive team to meet and define a true root cause for all the historical failures. 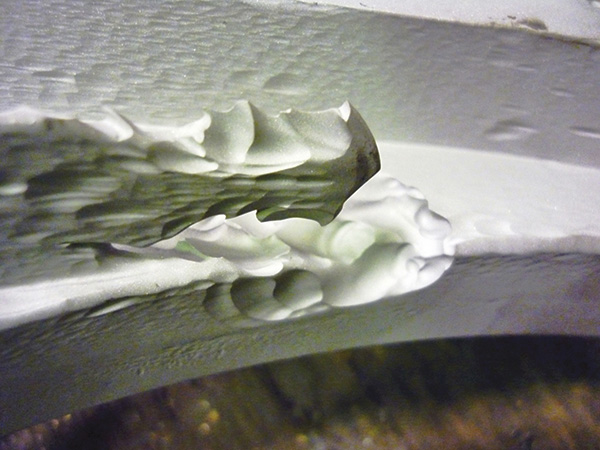 A cross-functional team comprised of members from engineering, operations, maintenance, refining technologies and process began meeting weekly to establish root causes of the continual failures. The team was also tasked with devising a plan that would allow for reliable operation of the motor-driven pump so that the turbine pump could undergo its scheduled rebuild without interrupting the unit’s process.

The team determined that the thrust issue was an inherent design problem and could not be addressed with field modifications. They also tackled the issues of erosion wear inside the case. They found discrepancies in pump operations and the actual design of the pump.

It was determined that the flow meters used to measure pump throughput had a flow correction factor that required adjustment for temperature. Once this was completed, it was discovered that the pump had been operating at 25 percent above its best efficiency point (BEP) instead of the expected 4 percent.

Rotating equipment experts determined that an operating point at this capacity coupled with the composition of the process and temperature would lead to the extensive abrasive wear that was found during every rebuild. The current geometry of the impeller and diffuser design coupled with the high-speed fluid and temperatures led to aggressive fluid directional changes that facilitated the abrasive wear. 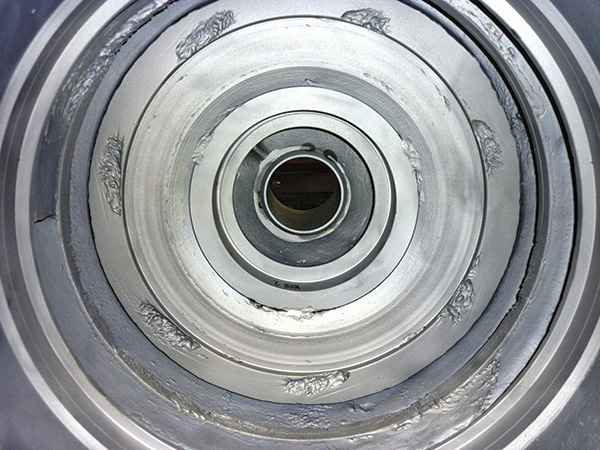 A pump that operates high above its BEP may experience cavitation, resulting in the formation of gas pockets that can lead to erosion. The fluid had also experienced an increase in catalyst carryover and other solids throughout the years that accelerated the pumps’ erosion rate. Operating beyond the BEP had created fluid recirculation pockets in areas of drastic velocity and direction change where the high erosion was found.

The team members implemented an action plan to mitigate the issues based on their findings. First, they addressed the thrust and erosion issues by procuring a new pump that would have a more balanced design. This new pump would also have a revised flow pattern design and coating of the internals with wear-resistant boron that would lessen the abrasion wear.

This option, however, was not pursued immediately because the equipment would have a lead time of six months. As an immediate resolution, the team rebuilt the existing motor-driven pump with the following modifications. First, the internals were furnished with an ion-nitride hardening process, suggested by the parts manufacturer, which would help mitigate the expected erosion wear. In addition, the bearings and impellers were sized to match the original design condition. This would help mitigate any thrust concerns and help the pump operate within its expected performance.

The team also implemented a weekly performance monitoring report in which the pump operating points were imposed against the pump curve to capture any gradual drop in performance and raise alarms to operations. This last recommendation proved helpful in determining the maintenance schedule and establishing a priority for the operational effectiveness on the coker unit. Additional lesser modifications included the seal flush piping, process warm-up lines, air cooled outer bearing and vibration monitoring. 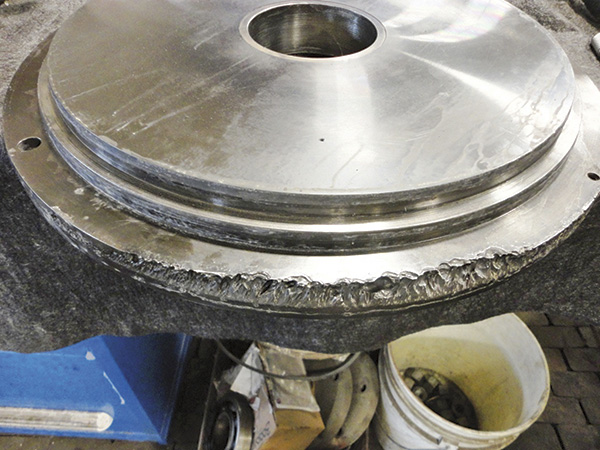 With these steps implemented, the maintenance team could pull both pump and turbine driver for a rebuild without causing any operational constraints. The turbine system received some modifications during the overhaul that would eventually allow higher throughput with what was previously considered lower capacity equipment.

The turbine low-pressure exhaust piping was relocated from a closed condensate return system to an atmospheric vent muffler. This would help decrease back pressure and improve the power rating of the turbine. During the turbine rebuild, which was its first in more than 20 years, the blades on the rotor assembly were repaired and replaced after they showed significant damage and bends, which would explain the limited amount of power output that was being received from the turbine. On the pump, additional seal flush piping and warm-up line changes were made that would improve seal life and overall maintenance frequency.

Considering an opportunity with the market margins, the coker unit experienced its most profitable months in its history, without process upsets or interruptions. The refinery reached its most profitable year in its 120-year history, and once recommissioned, the turbine-driven pump supplied the highest capacity margins in its history. Following this success, the only maintenance instances completed on these pumps until their decommissioning in December 2013 were the replacement of the newly ordered motor-driven pump (June 2012) and a radial bearing replacement on the turbine pump executed around the same time.

Miguel Salgado is a pump maintenance and reliability engineer at the BP Whiting Refinery in Indiana and has more than five years of experience in rotating equipment and diversity and inclusion initiatives. Salgado may be reached at miguel.salgado@bp.com.