Careful planning can save equipment from damage caused by unexpected events.
by Kimmeng Seang, Sulzer Pumps
04/09/2015

In the event of seismic occurrences, structures and their components often resonate. Resonance occurs when the structure’s natural frequency coincides with the seismic activity’s frequency. For structures to be designed to withstand such occurrences, engineers perform an equivalent static analysis with forces proportional to the structure’s weight.

Creating the plots in a response spectrum often includes subjecting an oscillating device with known spring, mass and damping to the transient loads. Personnel record the response over time and extract the maximum absolute amplitude. Next, they repeat the process through the frequency range using the same damping. Finally, the maximum responses are plotted over time as a function of frequency. Figure 1 is an example of an acceleration response versus frequency response spectra. 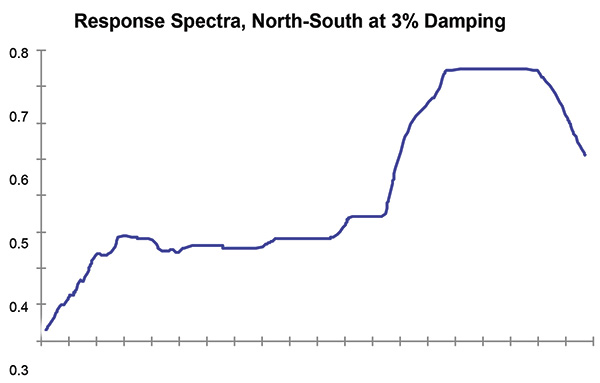 A response spectrum can be combined with the system’s natural frequencies or mode shapes to determine the system’s response.

These combined responses from mode shapes will determine the total response of the system. To obtain an accurate solution of the entire system’s response, it is necessary to combine the responses of individual mode shapes such that their cumulative effective mass approaches 100 percent of the total mass. Computationally, this is intensive. The best practice is to capture at least the response up to 90 percent of the total mass.

Imagine a 40-foot vertical turbine pump in a power plant weighing approximately 21,000 pounds. The owner wants to understand how much the pump’s suction bell will be displaced in the event of an earthquake. They have provided the acceleration versus frequency response spectra in Figure 1 (see page 110). To simplify the example, this article will consider only the first three mode shapes.

Finally, the displacement response for the mode shapes can be determined by multiplying the mode coefficient with the relative displacement.

Now that the responses have been determined, an appropriate combination method must be chosen for combining the responses. The first three mode shapes account for approximately 75 percent of the total mass, which means more modes need to be analyzed to capture a more accurate response.

Kimmeng Seang is an engineering design analyst for Sulzer Pumps (U.S.). He has worked for Sulzer Pumps for the last five years in different roles. Prior to Sulzer Pumps, Kimmeng functioned as a design engineer in the automation technology industry. He received his bachelor’s degree in mechanical engineering from the Georgia Institute of Technology and a master’s degree in business administration from the University of Tennessee. Kimmeng enjoys solving problems. He can be reached at kimmeng.seang@sulzer.com.