I found this quote while reading a news publication: “Sometimes the easiest way to solve a problem is to stop being part of the problem.” That’s because many of the most common problems in pumping systems are of our own making—specifically failure to develop a general scope document (GSD). I will reference the GSD many times throughout this series of articles on root cause failure analysis (RCFA). Why? Becaus I firmly believe (from firsthand experience) the root cause of most pumping system component failures is due to lack of clarity during the development of the project.

Yes, there is a difference. Failure analysis (FA) is replacing the failed component. This is nothing more than parts replacement because the failure mode was never identified. It has been my experience that failure analysis is the typical course of action taken by most facilities.

RCFA, though, involves a comprehensive analysis identifying all of the root causes (physical, human and latent).

To make my point and to set the tone for this series of articles, the following RCFA from 2004 is a classic case for differentiating FA from RCFA, as well as the cost associated with the common strategy of getting the equipment back in service ASAP. This RCFA case study has been condensed from its original 30-page version. Key points and findings have been used to make a solid business case for identifying the root cause of a failure as opposed to component failure/replacement. 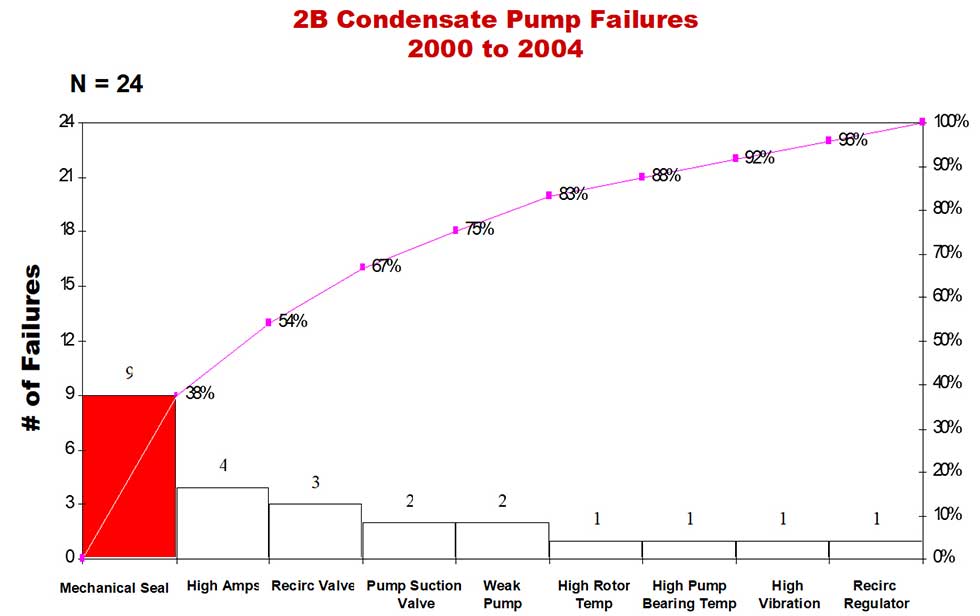 Situation: The plant began experiencing a number of condensate pump failures on one unit (2B). The site experienced nine failures in the four years, resulting in lost production/downtime. When the plant experienced an equivalent forced outage rate (EFOR) event during peak load, corporate took control and brought in a third-party consultant to resolve the situation. The data below was compiled by the balance of the plant engineering team in conjunction with the third-party consultant. The maintenance staff became quite proficient in replacing the wet end of the subject pump, performing change out in approximately 12 hours upon failure.

History: Over the years, the plan has experienced a high turnover in maintenance personnel. The plant would swap pump wet ends and motors from one unit to another without documenting. Experience level dropped over the years, and the site had difficulty retaining experienced mechanics.

Operations: Same scenario as mechanics, additionally the plant deviated from its operating procedure.

Maintenance/operating cost over 30 years: Upon review of maintenance records, we were able to develop an idea of the life cycle cost (LCC) of the unit 2B condensate pump.

Note: This is valuable information when justifying your solution. obtain this data when evaluating an application.

Soleplate out of level:

Coupling out of tolerance:

Labor to remove and install pump:

Valve damage: No record of repair, however, valve failure did result in EFOR

Due to loss of expertise, the pump was not installed or aligned correctly, the motor was not set level, the coupling had a significant run-out and the pump was installed with 0.6-inch pipe stress. The subbase was degraded and crumbling. As a result, the sole plate was out of level 0.2 inches. The motor had a run-out of 0.1-inch shaft to motor face. The coupling was not manufactured correctly with a 0.005-inch run-out on concentricity and, due to the run-out at the motor shaft to face, the coupling face was out more than 0.2 inches. The operators failed to vent the pump prior to startup. In addition, they would start two pumps when only one was needed.

Surprised by the total cost? I call this the cost of doing nothing because the plant only replaced failed components. I have found this course of action to be the norm. For the next 12 months, I will outline a process for performing a structured RCFA to avoid the cost incurred by this case study.

William Livoti is retired after more than 40 years in the industry. Livoti is a member of the Pumps & Systems Editorial Advisory Board. He may be reached at wlivoti@outlook.com.