Using a rubber expansion joint when the piping misalignment will be more than 1/8 in., however, requires special considerations. One standard practice is to use a concurrent movement calculation to ensure that the installation of the product does not use too much of the joint’s ability to compensate for movement. 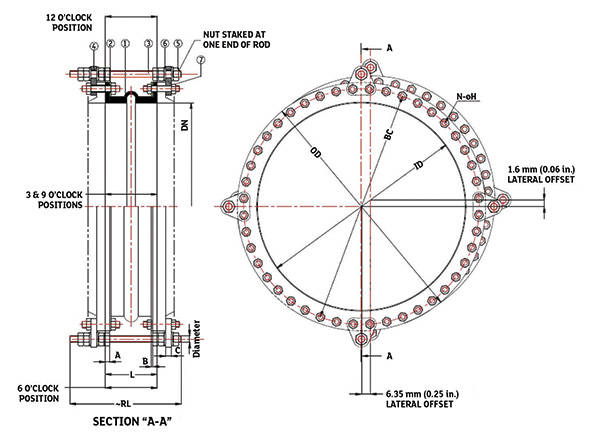 Concurrent movement is the combination of two or more expansion joint movements:

This value is expressed as the resultant movement. Equation 1 can be used to calculate concurrent movement.

The sum of compression, elongation, lateral and torsional must be less than one. If not, the joint is operating outside the design intent and must be evaluated.

In this example, the concurrent movement is above the allowable value.

For offset installations with piping misalignments that cannot be corrected because of limited space, cost or time, a rubber expansion joint can be fabricated to field dimensions to maintain 100 percent of the product’s movement absorbing capability. While this is a viable option, it should be used as a last resort. Users are also advised to have a spare custom part on hand.

An expansion joint supplier will need correct dimensions of an offset from one side of pipe to the other, including parallel, angle and hole misalignment of mating flanges. Offset rubber expansion joints are often supplied with drilling on one flange so the other flange can be drilled in the field when precise measurements cannot be supplied.