It’s quiet at the Mahanoy City Wastewater Treatment Plant in Pennsylvania. Unless you’d been told otherwise, you wouldn’t know that a 36-inch diameter pump operates night and day in a giant concreted basin nearby. Even when one of the two 84-inch screw pumps is being put through its paces, this plant is still a good neighbor. The Mahanoy City WWTP has not always run so smoothly.

The original 36-inch diameter raw sewage enclosed screw pump, which had become increasing unreliable, failed twice, ultimately giving the plant operators no option but to look for a more sturdy and efficient alternative. A heavy-duty enclosed Type C screw pump was chosen. The design has two convoluted flights that are welded to the rotating outer tube, with the lower bearing mounted above water level.

“At the time, this was pretty nerve-wracking,” Ball said. “The bolts on the stainless steel ring, on which the vast majority of the weight rests, simultaneously broke, causing the structure to break in half. It was scary.”

For storm events, the town must have sufficient back up capacity, so the decision was made to replace both of the larger pumps. Mahanoy City had little hesitation in deciding to replace the old units with two new 84-inch enclosed Type C screw pumps to match the 36-inch pump that had been working without any issues for the past 24 months. 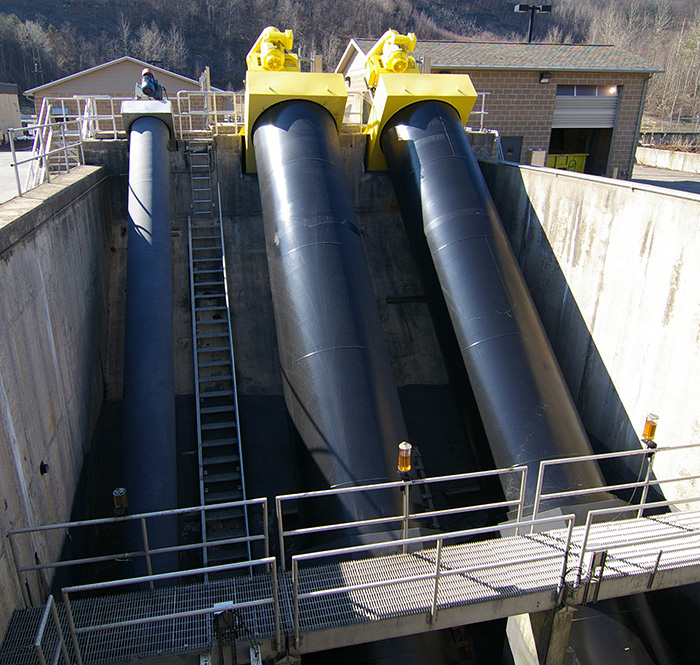 “We have a new soft start-up with 200-hp motors, but it is incredible that the pumps are so quiet,” Ball said. “In fact, when we first had them installed, we couldn’t hear anything, so we had to go outside to check that they were running. If we’d had loads of noise from the start-ups and constant humming, it could have led to possible complaints from the school district that’s so close to us, but everything is running smoothly and quietly. The difference between how the old pumps used to sound is like night and day—and we’ve also seen a big improvement in reliability."

“Compared to the previous cross-start motors on the old pumps, the Type Cs are also more efficient, using far less energy,” Ball said. “When needed, the capability of these pumps also gives us the advantage of being able to clean out the well without going over the bearings. The power is there to bring it down to operating levels very quickly.”

Installed in the wet well at an angle of 38 degrees, these larger pumps sit next to the workhorse 36-inch pump that works an average of 850,000 gallons per day, though it can handle up to 1.38 million gallons.

Designed for trouble-free operation, with options for either an open or enclosed design, the screw pumps lift large quantities of water or wastewater at low heads for applications such as return activated sludge or storm water pumping. The open design consists of the spiral screw, upper and lower bearings and a drive arrangement, using a tube and spiral flights set in an open, inclined trough that permits both simplicity and reliability.

The enclosed screw pumps use the same operating principles but are encased within a tube and use either rotating or stationary outer tubes inclined at up to 45 degrees, allowing the shortest horizontal space required for a given lift.

The enclosed Type C 84-inch diameter screw pumps, which were a drop-in replacement for the failed original internal-lift type pumps, have allowed the plant to get back to normal for the 4,000 residents of the town (plus 2,800 inmates and employees at a nearby state prison).

Once at the heart of the coal industry, Mahanoy City’s wastewater that goes through to the combined sewer overflow is all from domestic use.

“In this volatile environment, it is only stainless steel that ultimately survives,” said Ball, who has been working at the plant since he was a teenager almost two decades ago.

The smaller of the pumps, which is installed in the deeper part of the wet well, has required minimal maintenance since its installation—a weekly treat of oil and grease, plus an oil change twice per year. For the two new larger screw pumps, an oil change is required once per year.

“We do of course carry out regular visual inspections”, continued Ball, “but all three enclosed Type C pumps are extremely reliable."

Christopher French is a PR consultant. Lakeside Equipment Corporation is an engineering and manufacturing company concentrating on improving the quality of water resources. For more information, visit lakeside-equipment.com.