Consider these factors when using this technology.
by Stephen Shaw
by Chris Carmody
by Richard Smith
by Andrew Harrison
AESSEAL
09/01/2017

This article will use a case study as an example of one of the many cases seen in the field with a range of different manufacturers’ seals to provide a checklist of considerations for applications where product containment is essential.

Legislation surrounding leakages from rotating equipment sealing devices has led to the introduction of more stringent regulations, particularly relating to emissions and health and safety issues. Upgrading single seals to more compliant technology for mature assets has evolved from being a reliability issue into a requirement to provide effective containment, or prevention of the process fluid leaking to atmosphere.

In addition to selecting more modern sealing devices, there is often a need to introduce or upgrade a seal auxiliary system to further manage the risk of process fluids reaching the atmosphere. One such instance occurs when wet or dry secondary containment seals have been incorporated in addition to the primary seal faces that seal the process fluid. Dry containment seals1 have gained popularity over the past two decades. Specifically the refinery sector has used this technology for limiting emissions without incurring the cost of more traditional liquid dual mechanical seal auxiliary systems. 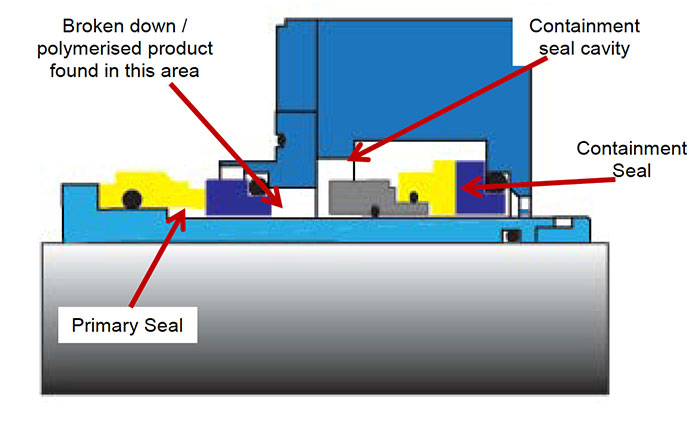 However, there is little written about monitoring of the condition of dry containment seals during operation, or how they behave in the event of high levels of leakage from a primary seal. According to The American Chemical Industry (API) 682, 4th edition, “there are specific concerns regarding reliability and integrity of dry containment seals when compared to wet buffer outer seals.”

A petrochemical plant had installed a containment seal on a process pump that contained Butadiene as the process fluid. No seal support system was applied. However, a pressure gauge was fitted to the containment seal cavity.
The seal operated at a temperature of 44 C, a seal chamber pressure of almost 8.2 bar(g) and a speed of 2,920 rotations per minute (rpm). After four years of operation, the seal catastrophically failed, and it was reported that there was a fire on the pump in question.

The seal was returned for inspection where the following was discovered. The primary (inboard) seal faces, although appearing scored and phono grooved, were intact. This suggested that the primary seal did not catastrophically fail, although heavy leakage could not be ruled out. 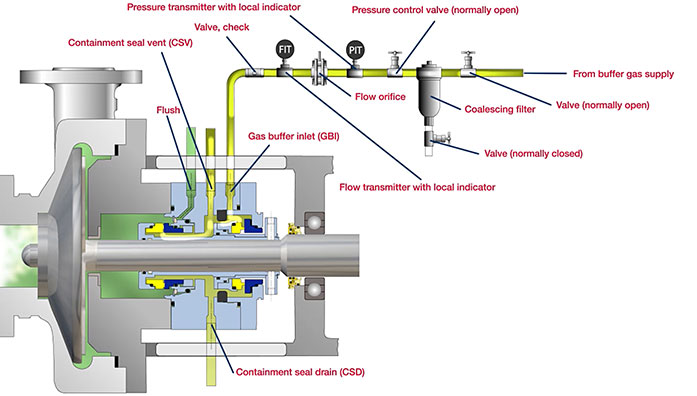 If high primary seal leakage occurs as a result of no auxiliary piping plans being in place, the gas lift grooves within the containment seal will fill with process fluid. If the process fluid has polymerised or broken down, these grooves will be ineffective and will not produce any dynamic lift, leading to seal face contact, overheating and eventual seal face failure.

In 2002, dry containment seals were recognized in the second edition of API 682. A series of piping plans offered to take leakage to a safe collection point. The basis for a containment seal is an Arrangement 2 seal (two seals per cartridge assembly with a liquid buffer fluid) with an API plan 71 seal support system as a minimum requirement (i.e. without buffer gas feed). The introduction of a buffer gas is covered with API Plan 72 and the collection/disposal of process leakage is covered by API Plan 75 and API Plan 76 (see Figures 2 through 4). 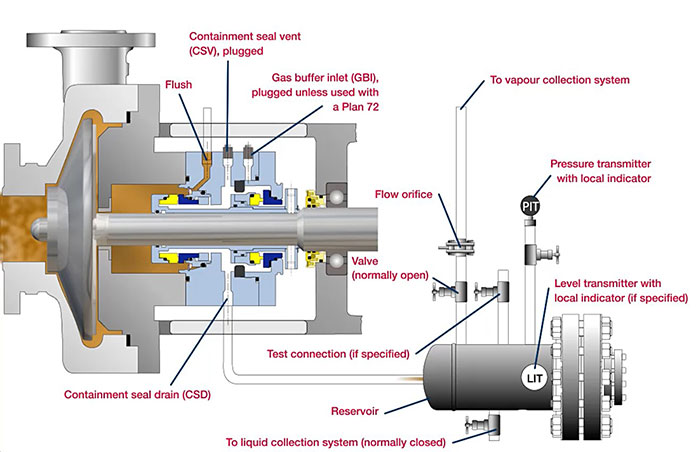 Plan 75 is used for pumped fluids where normal leakage would be condensing or mixed-phase fluid at ambient conditions. Plan 76 is used where the normal pump fluid leakage would vaporize in ambient conditions. Additionally, Plan 72 with N2 quench can be used to assist by sweeping the normal leakage to the collection location. API 682 4th Edition does not specify the buffer media. 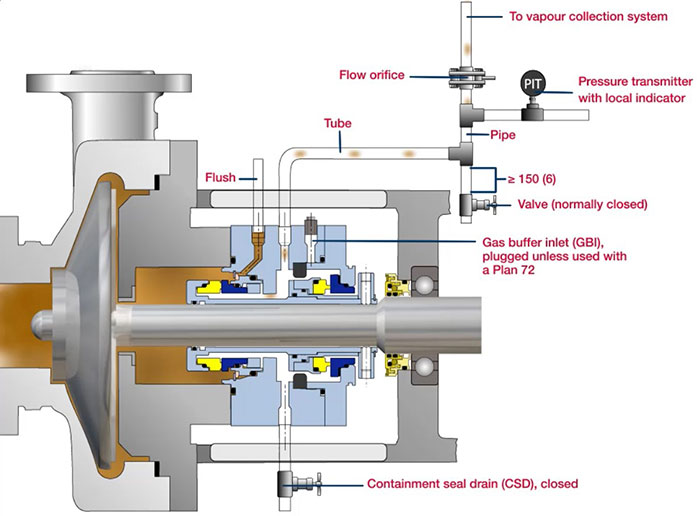 Users have many considerations when contemplating the use of containment seals. Contacting containment seals should be used with caution when buffer gas is unavailable. Non-contacting containment seals should be avoided when buffer gas is unavailable. Plan 72 buffer gas systems provide a suitable means of preventing emissions as well as a suitable means of reducing debris and subsequent damage to secondary seal faces while also providing cooling. Periodic testing of secondary seals is advisable to ensure containment integrity is provided in the event of a primary seal failure. Dual seals with pressurized seal support systems are the only true means of preventing process leakage to atmosphere. With the correct instrumentation, dual seals with pressurized seal support systems can allow seal integrity to be continuously monitored.

When these considerations are combined with the different requirements concerning emissions during normal and failure service (for both primary and secondary seals) plus integrity checks and monitoring, it is apparent why containment seals are not readily understood by most operators. Other sealing options can also be adopted that potentially provide the same level of sealing integrity as dry containment seals.

Plan 52 is a wet dual unpressurized seal (Arrangement 2) where the buffer fluid (liquid) fills the space between the primary seal and the outer seal (see Figure 5). Plan 52 is intended to be connected to a flare system so that the gaseous emissions that separate from the buffer fluid in the collection vessel can be vented. The 4th Edition of API 6824 specifies transmitters for both pressure and level, thereby offering a means of condition monitoring the primary and secondary containment seal simultaneously. 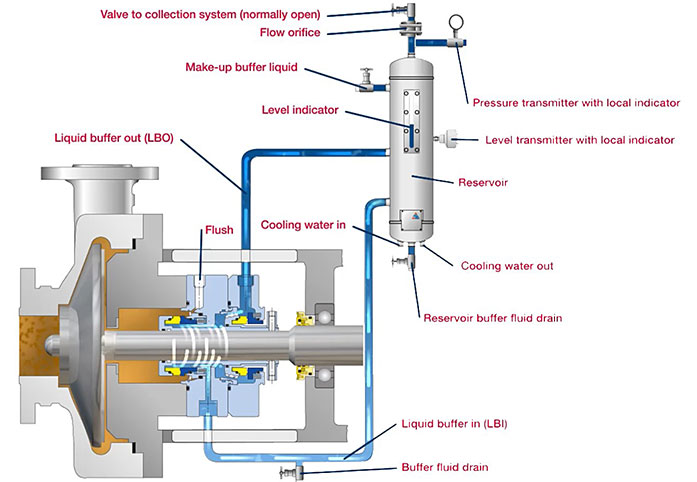 Any increase in liquid level in the tank, or an increase in pressure above flare would indicate high leakage from the primary seal. A reduction in liquid level would indicate a high leakage from the secondary containment seal. Plan 52, if operated and designed correctly, is limited to the same application group as Plan 76 and is unsuited for process fluids that condense at ambient conditions. API 682 3rd edition and subsequent 4th edition specifically addressed the suitability (or otherwise) of plan 52 systems.

Inner seal process liquid leakage will normally mix with the buffer fluid and contaminate the buffer liquid over time. Maintenance associated with seal repairs, filling, draining and flushing a contaminated buffer system can
be considerable.

One benefit of this type of system is that in the event of a pump being accidently dry run (not an uncommon occurrence in tank farm product transfer, or off-loading), both the primary and secondary seals remain lubricated and therefore will survive. 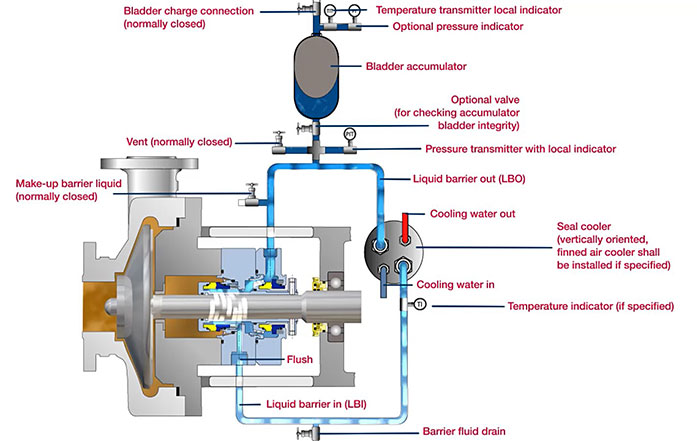 During normal operation, normal leakage of barrier fluid will enter the process across the primary seal and into the atmosphere across the secondary seal. Pressure is measured, and as the pressure decays over time, barrier fluid will be recharged either manually or by an automated top up system. The frequency of top up required provides operators with a very clear indication of seal condition. Increasing refill frequency would provide an early warning of seal condition deterioration.

With a properly designed dual seal, major leakage from either the inner or the outer seal will be contained. With excessive leakage from the primary seal, the barrier fluid circuit pressure would become equal to the seal chamber pressure. The pressure would alarm, but if alarm was ignored for an extended period of time, the outer seal would contain process. If the alarm was further ignored, the barrier fluid cooling circuit would become contaminated with process fluid over time.

In the event of excessive leakage from the secondary containment seal, providing the inner seal is hydraulically double balanced, the inner seal would contain and seal the process fluid. 53B is perhaps the safest of all the dual seal plans with the highest degree of fault tolerance provided that the operators understand the alarm and trip philosophy and have these levels set correctly in relation to the seal chamber pressure under normal operating and fault conditions. 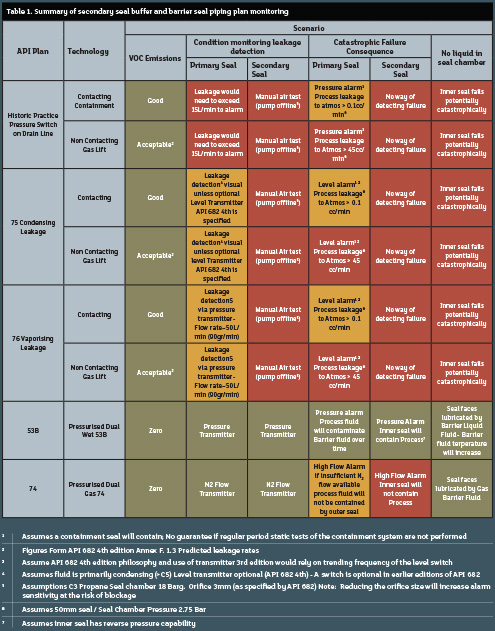 Click here to open a PDF of Table 1 in another window.

Table 1 compares typical containment seals against other typical dual seal arrangements (see page 36). Various typical scenarios are presented along with the alarm strategy that would be used and the effect of the condition. The traffic light color coding illustrates areas of concern. In particular, Table 1 focuses on a major event where the seal leakage is high (so-called catastrophic). Generally of equal importance is the prolonged integrity of the secondary sealing device since this ultimately prevents or restricts the leakage of large amounts of process fluid into the atmosphere.

In the case of containment seals, the condition of the secondary seal at the time of the primary seal’s failure—along with monitoring devices—will dictate how long containment is likely to last (if at all) and hence whether process leakage will be prevented prior to shutdown and isolation of the equipment.

Kalfrin and Gonzalez2 recommend protocols: testing containment seal integrity to detect a potential hidden failure of the outer seal. It is recommended to establish and adjust testing frequencies.

Fone and Bowden3 recommended containment seal integrity testing to be conducted on a weekly basis—such frequency would probably be impractical, however, as with any spot check testing the condition of the containment seal is only known at the point of testing.

Secondary containment seals should be operated with particular attention to control the normal primary seal process leakage collection. Operating them with an appropriate API plan as stated in API 682 is always key to ensure safe collection or disposal of the primary seal process leakage. In the example case study shown, the ideal solution would be to upgrade the seal and seal support system to a dual seal with a pressurized seal support system, which would ensure the integrity of both the primary and secondary seal.