Technologies such as low inrush motors, soft starters and VFDs can reduce spending and downtime.
by James Nanney
by Manish Verma
11/14/2014

With easy access to electricity, electric motors are now an option for large pumps and compressors once powered by gas engines or turbines. Electric motors can be low-voltage [600 volts (V) or less] or medium-voltage (greater than 600 V). As end users rely more and more on larger electric motors, they face new technical challenges—including how to start the motor.

When a large motor starts, it can draw from six to six-and-a-half times the motor’s rated full load current or motor inrush current. The resulting large voltage disturbances are unacceptable to utility providers and the plant power system. Operators must have an appropriate motor-starting strategy that aligns with the process and utility requirements while remaining safe, reliable, maintainable and efficient.

This article details popular motor-starting methodologies, how they work and how they affect the motor. The article will cover mechanical equipment ranging from 250 to 7,500 horsepower (HP) and motor voltage from 2.3 to 13.8 kilovolts (kV).

Low inrush motors are standard DOL motors from an operational standpoint. They run at a fixed speed according to the utility frequency. The motors require protection relays and are limited in their number of starts. However, they differ in rotor bar construction.

Figure 1a. Electrical one-line of a low inrush motor (Images and graphics courtesy of TMEIC) 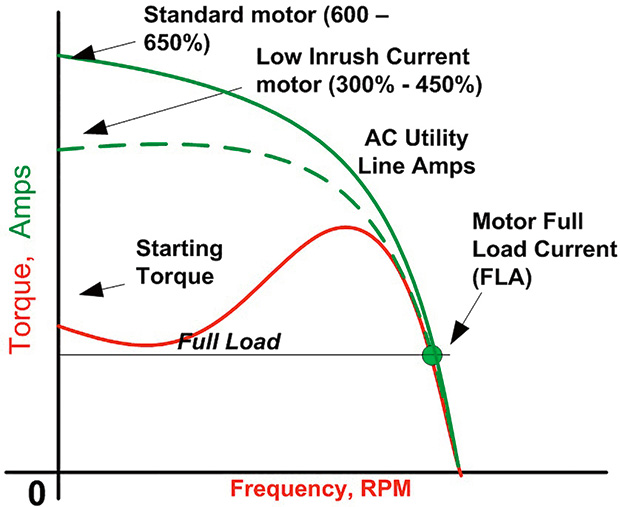 By modifying the rotor bar’s metallurgy, the inrush current can be reduced from 500 to 300 percent of the motor’s full load current. Figure 1a shows an electrical one-line of the low inrush motor starting scheme, and Figure 1b indicates the speed versus torque/current profile. While these design changes increase motor starting torque and reduce inrush current, they also reduce motor efficiency and increase the total cost of ownership. A double-cage rotor construction minimizes efficiency losses, where one set of rotor bars nearest the outside edge of the rotor is effective during startup (see Image 1). The inner rotor bars are similar to a high-efficiency motor, improving the running efficiency.

Typical applications for low inrush current motors are at installations that have “island” power generation, such as offshore platforms or remote locations on long power lines. Low inrush motors are custom-designed, have longer lead times and are more expensive to manufacture. The more inrush current reduction required, the more expensive the motor.

Significant capacity reduction for the generators or the power delivery system upstream from the motor offsets the additional costs. Low inrush motors can start variable or constant torque loads such as pumps, compressors, fans, extruders, conveyors and ball mills. Depending on the manufacturer, low inrush current motors have limited capacity of up to 15,000 to 17,000 HP, 3,600 rpm and 13.8 kV.

While this option is attractive, it is necessary to check the load torque and inertia of the driven equipment against the capabilities of the low inrush current motor. Failing to do so could result in the motor’s inability to accelerate the load.

Reduced-voltage soft starters are the simplest and most common methods for reducing motor inrush current. Based on the silicon-controlled rectifier (SCR) developed in the 1950s, soft starters have been a low-cost motor starting solution since the 1980s.

A soft starter uses SCRs to reduce the starting voltage and smoothly ramp up the voltage to the motor terminals without changing the power system frequency. Figure 2a shows an electrical one-line of a soft starter scheme. Similar to a household light dimmer, soft starters use a controller that allows for a timed ramp of output voltage and a programmed current limit. The output ramp sets the time during which the soft starter goes from zero to full voltage.

Figure 2a. Electrical one-line of a soft-starter 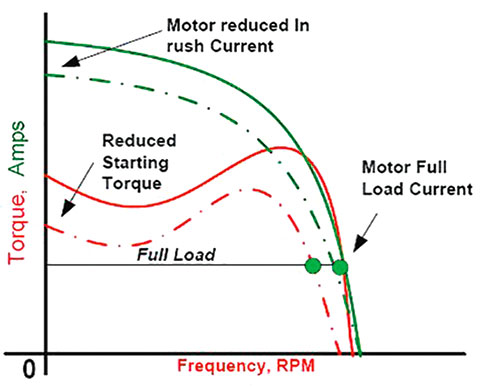 The current limit setting is for a maximum current allowed through the starter. When the solid-state starter reaches full voltage, the bypass contactor closes and bypasses the soft starter. This eliminates power loss from the SCR during long-term operation.

Soft starters cost less than other starting options but have their own application challenges. The available motor torque is proportional to the square of the applied motor voltage. For example, a 20 percent reduction in motor voltage will result in only 64 percent torque. Furthermore, the minimum inrush current is dependent on the power system capability, mechanical inertia, allowable acceleration time and voltage drop. As inrush current decreases, the starting time increases and motor torque decreases.

To ensure that a soft starter is effective for an application, the minimum inrush current must be determined. Simulation software can perform detailed calculations for a soft starter system. The better simulators will take into consideration power system parameters such as voltage drop at the bus. The following inputs are key to the simulation:

Common applications for soft starters are pumps, compressors, fans and blowers. Soft starters often prevent water hammer during startup and slowdown when pumping water. Reciprocating compressors or pumps—as well as other applications that start under pressure—do not benefit from soft starters because of their high torque requirement at low speed.

Soft starters can reduce the inrush current to roughly 350 percent of the motor’s full load current (see Figure 3b). A motor requires no modifications for a soft starter. These products are extremely reliable and have matured since their development. The simplicity of the SCR electronics, which are easier to use than the transistor-based controls in VFDs, contributes to the longevity of soft starters.

Figure 3a. Electrical one-line of a VFD 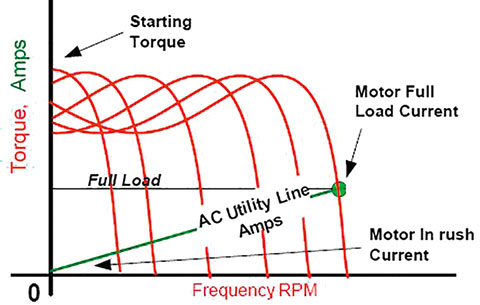 VFDs convert fixed-frequency utility supply into variable voltage and variable frequency output.1 With a VFD, inrush current never exceeds the motor’s full load current. Figure 3a shows a VFD and a bypass arrangement for starting a large motor, and Figure 3b shows the motor speed-torque/current profile. According to Figure 3b, the inrush motor current should be able to ramp up from zero to the motor’s rated full load current. However, in practice, the VFD supplies the appropriate amount of current to start the motor and the load from standstill and to accelerate.

VFDs have several other key advantages. They can vary the speed of the motor and have a high power factor across the entire speed range. They enjoy unlimited starts per hour while still providing energy savings for pumps and compressors. A smaller drive can be used with the VFD for starting only, reducing the initial cost. The drive reduces the load on the driven equipment and uses the momentary overload capability of the VFD.

One VFD can start two or more motors sequentially and synchronize them to the utility line (see Figure 4). Each motor can leverage the benefits of a common VFD. This ability to use a common VFD reduces installation costs while still allowing variation of the speed on any one motor. 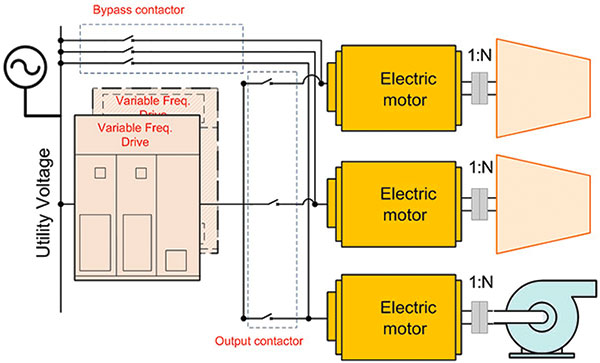 This configuration is widely used in the water and wastewater industry, crude oil pipelines and gas compressor services.

Selecting the right starting strategy is critical to reaching targeted capital expenditures, planned revenue and total cost of ownership (see Figure 5). Except for VFDs, the available short circuit current and allowable voltage drop must be known for most starting strategies. Plant personnel should consider the process requirements, starts per hour, torsional effect on the driven equipment and motor power factor before selecting a motor-starting method.

Table 1 compares various starting methods. Cost factors are weighted against the DOL starting method, which uses neither a soft starter nor VFD and is the least expensive option available.

Several industries are experiencing a growing need for large-capacity motors on pumps and compressors. End users can rely on different strategies and technologies when starting large motors in their facilities. The correct starting strategy will depend on meeting each installation’s unique challenges and costs while evaluating potential trade-offs. Specifying the appropriate starting strategy at the early stages of a project will affect the safety, initial capital investment, operating costs and the system’s long-term reliability.

James Nanney graduated in 1979 from Texas A&M with a bachelor’s degree in industrial distribution. He works with TMEIC Corporation as a technical sales manager. His responsibilities include specifying and applying medium-voltage motors for critical oil and gas applications, such as turbo compressors, pumps, fans and extruders. He may be reached at james.nanney@tmeic.com.

Manish Verma has a B.S. in electrical engineering and an M.S. in electrical engineering with concentration in power. After working in different TMEIC business units, he joined the global drives division, with a concentration on sales and application engineering, new product developments and drive enhancements. His responsibilities include power systems and electronics, adjustable speed drives, and technical training. He may be reached at manish.verma@tmeic.com.