The future of desalination will require a combination of experienced-based design and environmentally friendly technologies.
by Boaz Keinan
IDE Technologies
02/27/2017

Today’s reverse osmosis (RO) plant design is based on diverse technological knowledge and, just as importantly, on operational experience, which can be a valuable asset for design teams. For desalination plants, it is important to explore a methodology for bridging between operation and maintenance (O&M) experience and design, while finding the process design of the future. 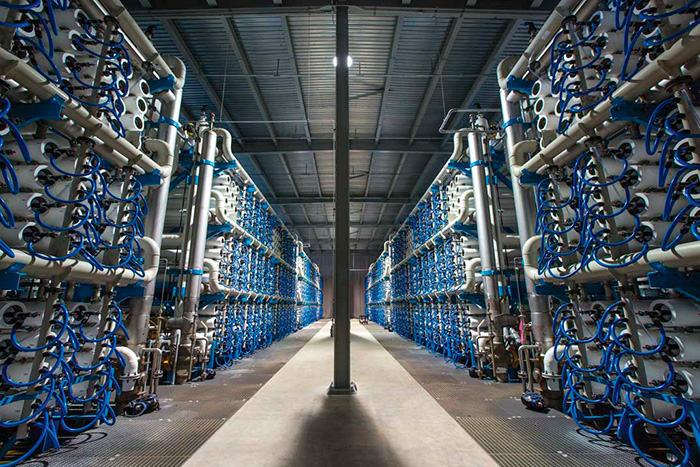 Methods of harnessing operational experience and turning it into valuable design knowledge for desalination plants include:

Taking operational experience into consideration does not mean that the RO plant is overplanned. Sometimes a small investment can make a big difference and lead to better results for the plant.

The design team should learn the RO plant’s behavior from the O&M personnel and optimize the design accordingly. For example, the chemical consumption can be reduced through improvements and optimizations performed during O&M.

At the Ashkelon Desalination Plant in Israel, the second pass chemical consumption of caustic soda and sulfuric acid were optimized through day-to-day monitoring of the performance parameters such as actual boron rejection, membrane-feed pressure and normalized flow. Ferric chloride consumption was optimized through monitoring of pretreatment performances and by using improved control methods. 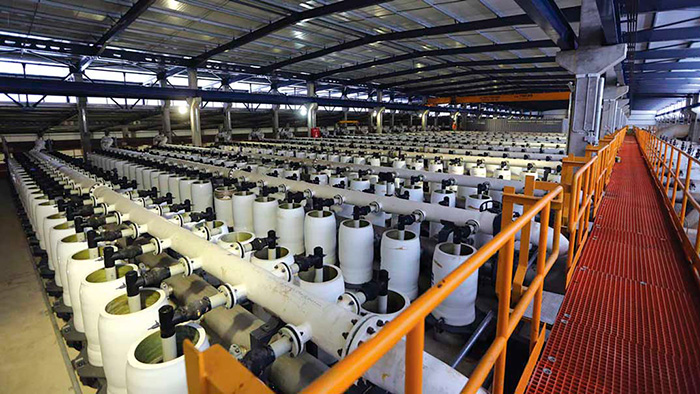 One method of improving design is by studying equipment failures together with the O&M team and providing technical support until a solution is found. During the first operation period in the Hadera Desalination Plant in Israel, the media filter’s flap valves suffered from leakage. A new mechanism based on hydraulic pistons was developed, including reinforcement of the shafts and improvement of the rubber sealing.

The hydraulic mechanism was first piloted and then implemented successfully in full scale.

An example of how optimizing control and automatic sequencing can lead to design upgrades involved leakage from high-pressure (HP) valves isolating the RO train identified in the Hadera plant.

Following a thorough investigation, the O&M team improved the startup and pressurization sequence so the pressurization occurred in a gradual manner, preventing sheer forces on the isolation valve’s Teflon sleeve. This modification proved successful and the experience was transferred to some other plants working with pressure center.

The O&M team gains significant experience and knowledge of what material is resistant and what should not be used. The chemical line insulation and heating provision were added for chemicals with a high freezing point (such as NaOH lines) in the Ashkelon plant.

The sulfuric acid injection assemblies, which suffered from many leaks because of the exothermic conditions existing in the injection point, were replaced with a Teflon-coated steel type. This robust solution was then added to future designs.

Additional coatings for concrete, steel and pumps were implemented by the O&M teams. The team, with the support of the design team, implemented a cathode protection system for the metal pipes and pumps. Some of these lessons, already learned during the design stage, will cost less in the overall plant life cycle.

The O&M team may adopt or install additional systems or solutions as a response to maintenance problems. The design team can study the problem and the implemented solution and, in relevant cases, it can be added into future designs.

For example, areas with high-suspended solids load are typically known as high-maintenance areas and therefore not favorable for the O&M teams. Specifically, limestone suspended solids started to settle and accumulate in a backwash channel. For this case, the O&M team introduced a simple nozzle system for mixing and preventing of the massive settling. In later design, means of preventing settling in high total suspended solids (TSS) areas have been considered.

An additional example for an add-on system is when Ashkelon’s O&M team intended to reduce the cartridge filter replacement rate by cleaning used cartridges and putting them back in operation. At first, the team used a pilot, after which a cartridge clean-in-place (CIP) system was added into the full-scale plant. Later, a cartridge CIP system was incorporated into the Hadera plant design.

In this and other such cases, it is important not to automatically adopt every modification. In some cases a solution can be suitable only for the specific site. In the case of a cartridge filters CIP system, introducing the system and performing the cleaning should be evaluated on a case-by-case basis because it may not always be cost-effective (depending on the expected replacement rate and the cost of available cartridge filters).

When the O&M team encounters a problem, it is important to not finalize any design decisions too early. For example, the sludge treatment centrifuges in Israel’s Sorek, the world’s largest seawater reverse osmosis (SWRO) desalination plant, were replaced by a filter press because of frequent failures. However, the same centrifuges are used and perform well in the same application at the Carlsbad plant, which is the largest desalination plant in the Western Hemisphere.

During the first period of operation in Hadera, the team encountered operational problems with the limewater preparation system, including unstable control, high maintenance and low performance. In this case, the operation team worked on stabilizing the system, improving and optimizing its performance.

These examples demonstrate that if adequate time, resources and technical support are provided, stabilization is reached or a solution can be found.

Using the O&M to learn the RO plant’s behavior and optimize plant design accordingly is of paramount importance. The future of desalination will require a combination of experienced-based design and environmentally friendly technologies.

Boaz Keinan is manager, RO Process Department, at IDE Technologies. He may be reached at boazk@ide-tech.com. For more information, visit ide-tech.com.