The concept of solar and wind energy as a "green" source is not new. However, it is one thing to talk about it, and another thing to actually do something with it. The difficult part, as with any technology, is how to start. Private investors hesitate to take a risk on anything that is nothing less than an absolute guarantee, and the governments, even with all good intentions, are usually caught in bureaucratic red tape.

The solution appears to be when the government and private sector work together to launch the technology, and then the private industry takes control. Government helps alleviate the financial risk, but leaves the actual implementation to the private contractors, who, while they appreciate the altruistic side of it, still need to make money to stay in business.

When it comes to pumps for solar and wind energy, are there limitations on power or sizes? Not really. Solar energy, for example, uses technology that consists of a number of solar clusters, each of which includes a power tower surrounded 360-deg by an array of heliostats. Heliostats are flat, glass mirrors that track the sun and reflect sunlight onto a receiver, which is located on the top of a power tower. Power towers are linked together by pipelines to a central location where electricity is generated and sent to a power grid.

Alternatively, water is heated to superheated steam at a temperature of 550-deg C to 565-deg C (more than 1,000-deg F). A high efficiency steam turbine converts the superheated steam to electricity, which is sent to a power grid. This technology is more than 40 percent efficient in thermal to electric conversion. Both 100-MW and 200-MW power plants are currently being designed.

In wind power, meanwhile, a rotating shaft comes out from the rotating wind turbine, so it requires no intermediate steps of conversion of one form of energy to another until the power finally arrives at the pump shaft. However, there are obvious issues with low speed of rotation and changes in the RPM. An additional gearbox may be needed to increase the speed of the pump shaft, and some sort of the mechanism may be required to even out variation in RPM as wind gusts change. These details present some technical challenges, but certainly will be resolved as the technology matures. 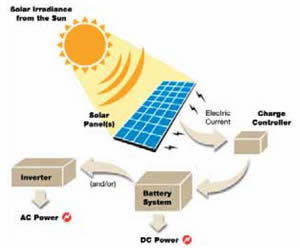 In the United States, these technologies are in use in various locations. Logan International Airport in Boston (see Figure 2) is the first airport certified by the U.S. Green Building Council for using the highest green construction standards. Among the features are roofing that reflects heat, various energy-savings features at the terminals and wind turbines on top of the terminal that not only generate environment-friendly electricity, but also look aesthetically pleasant. 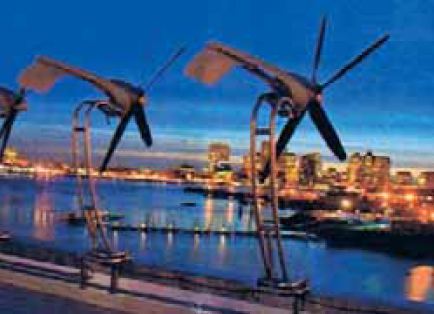 Solar power is also in use at this location through an array of powerful mirrors heating water to 600-deg C (more than 1,100-deg F) in a large boiler to produce steam to drive power generators.

What makes these things possible? Says Eli Bronstein, a vice mayor of Dimona, Israel: "In Israel, as in most countries in the Middle East, we all have plenty of sun, and most new private homes and apartments have been using solar energy for years. For larger industrial applications, it is more difficult for private constructors to initially come up with cash to handle a large project. We work with the private industry in a businesslike manner, making sure our environment is protected, but leaving the technical details to government officials[MS1] . This way, we get things done, with not much delays, and within established budgets."

Natan Mazor, a director of the Industrial Park, recently gave us a tour of the plant, with pride in the accomplishment.

The efforts in renewable clean energy were recognized at the recent Electricity 2008 conference in Eilat, Israel, last December, chaired by Michael Bixon, Israeli Electric Company. During the conference, James Runnels of the U.S. Department of Energy (DOE) discussed the status of the newest trends, energy savings through efficiency improvements and the increasing trends of more implementations.


Wind and Solar in the Middle East

Echoing Israel, other countries in the Middle East are pursuing solar power. In April 2008, Saudi Arabia's Oil Minister Ali al-Naimi expressed negative opinions about biofuels, but added solar power had to be considered one of the best clean energy sources. "Let's be realistic, ethanol and biofuels will not contribute to the protection of the global environment by reducing (carbon dioxide) emissions, they will not increase energy security, nor will they reduce dependency on fossil fuels to any appreciable degree," he told an oil conference.

He added: "One of the research efforts that we are going to undertake is to see how we make Saudi Arabia a center for solar energy research, and hopefully over the next 30 to 50 years we will be a major megawatt exporter."

Other countries and companies are working together for the common good of improved efficiency, with an emphasis on wind and solar energy. With wind power, as well as solar power, it is only a matter of time when the investment in technology begins to pay off and helps the world become more green. And that is a good thing.