A pipeline station and tank farm in the Southwest uses four identical four-stage vertical booster pumps driven by 300-horsepower (hp) electric motors to transfer crude oil between various storage tanks. The piping systems and support structures are identical. To expedite the process, the facility made plans to increase pump output by adding a fifth stage and a larger 400-hp motor. Before moving forward with the planned upgrades, the facility had to identify and resolve several questions concerning ongoing vibration-related issues. It needed to determine if the planned upgrades would exacerbate current or create new vibration-related anomalies. Using vibration signature analysis, operating deflection shape (ODS) and experimental modal analysis (EMA), the end user was able to identify the cause of the current vibratory forces. In addition, structural dynamic modification (SDM) software was used to analyze the dynamic effects the planned upgrade and increased pump output would have on the system.

The operations team chose Booster Unit (BU) 3 and BU 4 (see Image 1) to be the subject of this study. 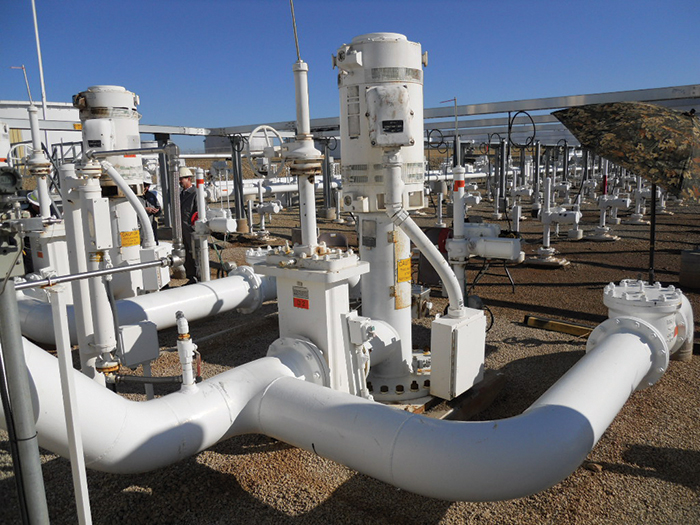 The first study (Study 1) was conducted to investigate reported vibratory energies measured on the motor and deflection of the associated piping in various locations. In addition, recommendations were made to alter the structure to accommodate the additional dynamic loads that could result from the planned system upgrades. These recommendations included increased pump output, a more robust discharge head and a heavier 400-hp motor.

A second, post-modification study (Study 2) was conducted to determine how well the predicted effects on the system matched the actual responses of the modified system. The decision to proceed with modification of the other three units was based on the results of Study 2.

The data acquired for both studies included signatures for the basic vibration, ODS and EMA analysis. Each data acquisition method is summarized below:

During the data capture, BU 4 was operating near full load, recirculating through a tank pumping crude oil. A comparative review of the amplitudes for Studies 1 and 2 was presented. As indicated, the majority of the overall amplitudes decreased or remained the same.

The vibration signatures produced by the operation of the motor and pump were presented in the representative MOH. The spectra of the two motors are similar. However, noted was the change of amplitude in the subharmonic 0.33 x revolutions per minute (rpm) component.

The higher order frequencies of the new motor are near rotor bar and slot pass, which is common with high-efficiency motors.

The animations revealed that the torsional forces generated by the motor rotor were twisting the discharge head. This motion was imparted to the discharge nozzle, which also produced a torsional force. At the nozzle, force transitioned to the discharge block valve, forcing the valve toward the right angle discharge piping. The force reversal, due to the spring constants of the discharge head and nozzle, resulted in a rocking motion of the valve perpendicular to the pump. The valve motion imparted the torsional force into the attached T-junction, forcing the straight run piping to twist, drawing it back toward the pump and driving the right-angle section downward. Acting as a moment arm, the right-angle piping imparted a torsional force into the attached piping, resulting in a torsional motion that changed direction as it transitioned through the check valve. This produced a sinusoidal motion along the long axis of the pipe. 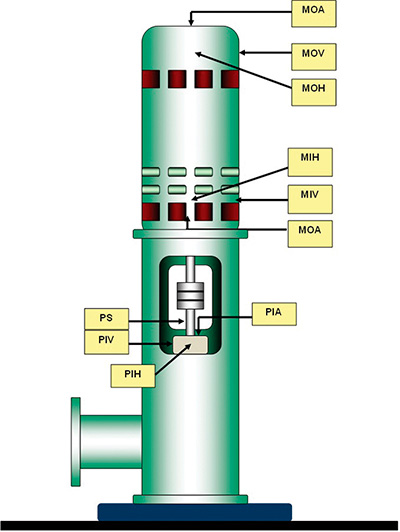 Using the modal data from Study 1, the team animated a predicted SDM deflection shape and then compared it to the actual shape animated with the data from Study 2. By comparison, the predicted and actual shapes were very similar in magnitude and direction to the structural perturbations. The parallel-to-discharge oscillation of the motor was as anticipated. The structure of the new motor did have some effect on the mass distribution of the model (the original SDM equations include a cylindrical National Electrical Manufacturers Association [NEMA] frame motor), but the mass-to-stiffness ratios were very similar, hence the similarities of their deflection shapes. As predicted, the torsional forces on the discharge nozzle were eliminated because the weight of the discharge block valve was fully supported by the new concrete pier. Additionally, the flexure of the piping at the check valve was less than indicated in the SDM model, suggesting the optional valve support structure was not required.

Comparison of Study 1 to Study 2

The comparison of the SDM modified structural resonance modes to the actual measured modes was presented in an interference diagram, also called a Campbell plot. This type of graphic is a convenient method of displaying a system's natural frequencies as they relate to the primary and harmonics of running speed. The plot can show where an increase in vibration amplitudes that result from resonance may occur.

As indicated, the first response of concern was the predicted first mode at 1,992 rpm. After the modifications, the new first mode increased to a more comfortable 2,376 rpm, or 33 percent above the nominal running speed of 1,781 rpm. The higher order second and third modes shifted down most likely because the omission of the additional support under the check valve changed the system stiffness from what was predicted in the SDM model. None, however, coincided with any frequencies of concern.

Modification and upgrades to existing systems can be expensive because of engineering and material costs and loss of production—all adding up to increasing the payback period. Depending on the extent of the modifications, end users must understand the system and consider the effects of the modifications prior to implementation. System upgrades intended to eliminate design problems can introduce a new set of structure-related issues. Using the tools and techniques presented in this article can help eliminate problems and ensure the reliability of new systems.

Jay Marchi is a 1985 graduate of Pennsylvania State University with a Bachelor of Science in electrical design engineering technology and is employed by ProPump Services (PPS), an engineering and diagnostic consulting firm located in Bethlehem, Pennsylvania. Marchi may be reached at jmarchi@propumpservices.com.