LNG benefits have increased the demand for this cleaner burning fuel and associated production and distribution equipment.
by Gobind Khiani
08/20/2014

Liquefied natural gas (LNG) is natural gas in a liquid form that is clear, colorless, odorless, non-corrosive and non-toxic. It is produced when natural gas is cooled to minus 259 F (-161.66 C) through a process known as liquefaction.

During this process, the natural gas—which is primarily methane—is cooled below its boiling point, and certain concentrations of hydrocarbons, water, carbon dioxide, oxygen and some sulfur compounds are either reduced or removed.

LNG is less than half the weight of water. If spilled on water, it will float and then immediately vaporize if under atmospheric pressure.

LNG has been used as a clean burning alternative in power plants and in thousands of vehicles for decades. With the substantial growth of the LNG fuels industry around the world, the opportunity to use LNG as a cleaner and lower-cost vehicle fuel in transportation fleets and heavy horsepower equipment continues to grow.

LNG has many benefits when compared with other fossil fuels. It is less expensive, has fewer emissions, and is safer and less likely to ignite. 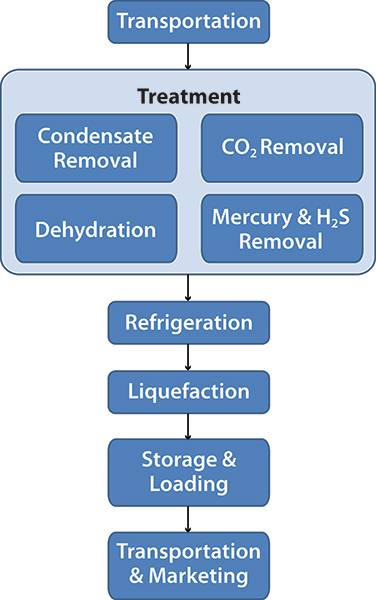 On average, LNG costs about 50 percent less than gasoline or diesel fuel and delivers the same power and performance. According to the Federal Reserve Economic Database, in 2010, the U.S. spent $552 billion on oil alone, and 61 percent of that was imported. A 50-percent savings could bring many benefits.

LNG produces up to 90 percent lower emissions than gasoline or diesel. LNG’s reduced amount of greenhouse gases makes it the cleanest internal combustible fuel for our environment. It also burns cleaner inside engines, resulting in fewer oil changes and less maintenance. By replacing the traditional diesel engine of one 18-wheeler with an LNG engine, its carbon footprint reduction is equivalent to removing 324 automobiles from the road.

LNG is lighter than air. In the event of a spill, LNG disperses quickly, unlike petroleum-based fuels that pool on the ground and create a fire hazard. It also has a higher ignition temperature, making it less flammable than gasoline or diesel. In addition, LNG is non-toxic and non-corrosive and will not contaminate ground water.

Pumps used in LNG service are integrally mounted on the same shaft as the motor, which is submerged without coupling or mechanical seals in the LNG liquid. For a retractable in-tank application, the pumps can be installed inside the LNG storage tanks in vertical pump columns with foot valves at the bottom. This removes the possibility of tank leakage because of piping or other external problems. The pump retraction system permits the unit to be safely removed from an operational tank without venting gas vapor to the atmosphere.

By enclosing the entire unit within a suction vessel built to an appropriate pressure vessel code, such as American Society of Mechanical Engineers Standard VIII, the system becomes safe and simple. The pump is factory aligned. It has no couplings and no auxiliary piping for seal purge, bearing cooling or lubrication. This makes it a lightweight, uncomplicated installation.

Key factors to consider for LNG application pumps are:

Valves used in LNG service are designed with an extended bonnet to avoid freezing the packing at operating temperatures. This allows operations to cycle valves as required. Valves manufactured for cryogenic applications should comply with type tested to British Standard 6364 or an equivalent standard. Nonmetallic materials should be restricted to polytetrafluoroethylene (PTFE) and graphite.

Fire-safe design to prevent internal leakage is achieved by using resilient sealing materials that do not decompose or deteriorate during a plant fire. The edge of the metal seat retainer preloaded by the seat spring comes into contact with the ball (in a ball valve) to shut off the line fluid to minimize internal leakage through the valve bore. The seat retainer also compresses. The flexible graphite retainer packing prevents fluid leakage between the valve body and the seat retainer.

A bidirectional flow sealing mechanism is employed so that each of the upstream and downstream seats of the valve adequately contacts the ball with a seat spring. Line pressure further maintains this contact method. The cavity pressure relief is designed to avoid trapped volatile liquid releasing into the downstream flow.

Key factors to consider for valves in LNG applications are:

Gobind Khiani is a professional engineer with Fluor Canada Ltd. He has been in the energy and power business for more than 18 years and has worked in three countries (the U.K., United Arab Emirates and Canada) with more than 10 years in the Western Canadian oil and gas industry based in Calgary, Alberta.

He graduated from the University of Poona in India and completed his master’s in materials and mechanical engineering from Schulich School of Engineering at the University of Calgary, Alberta. He is a registered professional engineer in the provinces of Alberta and Saskatchewan. Khiani can be reached at gobindkhiani@gmail.com.