Slurry pumps have the difficult tasks of resisting wear while passing large particles and rocks, preventing air derating when pumping froth and foam, and remaining easy to maintain. This balancing act makes the slurry pump less efficient than its clean and gray water counterparts.

The ability to pass large rocks is often achieved by limiting the number of thick vanes that would block the eye of the impeller. Many dredge and slurry pumps use three or four vanes and less commonly five vanes. These designs can leave large areas at the tip diameter at which the flow can slip and recirculate. This causes a loss of head.

To control slip and reduce recirculation in slurry pumps, impellers with alternating primary and secondary vanes were invented in 1994. Originally developed in Canada (Canadian Patent Application CA2120977A1), these impellers are considered prior art to patents obtained in 2013 by different manufacturers (patents EP2310689A1, EP2331227A1, US8511998, WO2009143569A1). For example, the impeller in Figure 1, developed in 1994 under a grant from the National Research Council of Canada, features alternating principal and secondary vanes, or split vanes, for a vertical froth pump. These alternating vanes can break up air locks that result from entrained air associated with flotation froth for mineral processing circuits.

Part One of this series explains the general concept of slip in centrifugal impellers. The second part covers controlling slip in slurry pumps with split vanes or alternating primary and secondary vanes.

The flow through a centrifugal impeller is fairly complex, so mathematicians have developed a model based on velocity.

Consider flow through a centrifugal pump impeller between two radii, R1 and R2 (see Figure 1). If a pump impeller rotates at an angular speed ω (in radians per second), it develops a tangential or peripheral velocity at the start radius of the vane (R1).

It also develops a tangential or peripheral velocity at the tip radius of the vane (R2) (see Equation 2).

At each radius, an angle (β) is defined as the angle between the center curve of the vane and the tangent to the radius. The component of velocity is in the direction of β and is called the relative velocity (W). The relative velocity and the peripheral velocity combine at each point to form the absolute velocity. As the fluid passes from the vane inlet R1 to the vane tip R2, head develops. The ideal head value is called the Euler head (see Equation 3 below).

In Figure 1, W = Cm* cot β. The Euler head is modeled in terms of the following changes of energy:

Most pumps have a discharge angle β2 that is less than 90 degrees and are called impellers with backward curved vanes.

Slip of Flow Through the Impeller 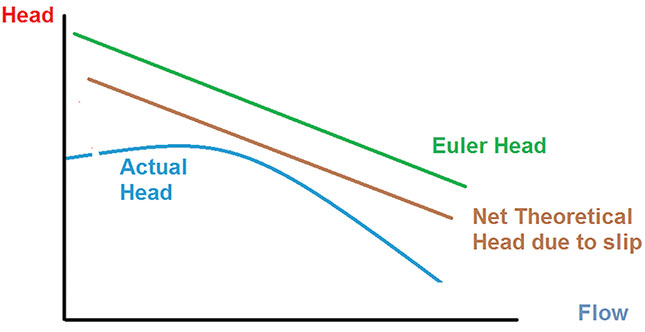 The slip factor is defined as the ratio of the measured absolute velocity to the ideal value necessary to develop the Euler head, taken at the tip or outer diameter of the vanes (see Equation 5).

The meridional velocity is not affected by slip.

The slip velocity develops as a result of the difference between W2 and W2’.

The actual head developed by the impeller at the best efficiency point can be related to the Euler ideal head through the hydraulic efficiency (ηH) and the slip factor (σ).6

Baha Abulnaga is a professional engineer and a director at Splitvane Engineers Inc. He graduated in 1980 with a B.Sc (Eng) in aeronautical engineering from Queen Mary College at the University of London. In 1986, he graduated with an M.Sc in materials engineering from the American University in Cairo. He is the published author of The Slurry Systems Handbook (McGraw-Hill 2002) and 23 papers quoted in many technical references. Abulnaga has spent most of his career dealing with mineral processing, oil and gas, and engineering slurry pumps for various manufacturers and engineering firms. He is licensed in many jurisdictions and may be reached at baha@splitvane.com.