It has been a little more than a year since China launched yuan-denominated crude oil futures contracts on the Shanghai International Energy Exchange (INE) in March 2018. There are signs that the new contracts are being accepted into a market dominated by West Texas Intermediate crude oil (WTI) traded in New York and Brent crude oil (Brent) traded in London. Designed specifically to attract international participants, China hopes the Shanghai crude futures will create a new China-based global pricing point for crude oil alongside the incumbent international crude benchmarks like Brent and WTI. The creation of the Shanghai oil futures followed years of planning by the Chinese and are a key part of Beijing’s broader strategy to gain clout in global oil trade and turn the yuan into a credible challenger to the dollar. 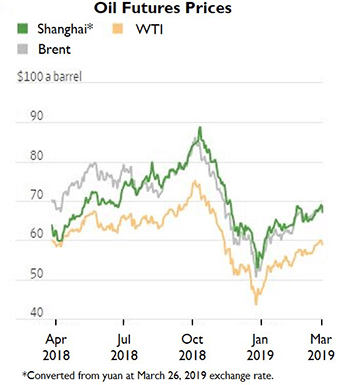 The value of Shanghai crude futures reflects the price of medium sour crudes stored in bonded tanks close to refining locations on the coast of China. The Chinese see the Shanghai contract as a path to reignite international interest in the yuan, which has fallen amid the currency’s slump against the dollar and government interventions in the market since 2015. While most Chinese commodity markets are open only to domestic investors, foreign investors have been allowed to trade the INE contract since its launch, with the Chinese Ministry of Finance granting a three-year tax exemption on trading profits.

According to the INE, 52 overseas agencies have registered with the exchange. They are mainly from Hong Kong, Singapore, Britain, the Republic of Korea and Japan. These agencies are serving customers from Britain, Australia, Switzerland, Singapore, Cyprus, Seychelles, as well as Hong Kong and Taiwan.

The success of any new futures contract and market is typically measured by its liquidity, depth and open interest. In the case of a physically settled contract, the delivery mechanism of the new contract is also closely scrutinized by the market. Over the past year, China’s yuan-denominated crude oil futures’ trading volume has grown strongly while prices have closely tracked global benchmarks. In January, daily trading volume of front-month crude oil futures on the INE averaged 248.5 million barrels of oil. This made up roughly 20 percent of global trading in similar contracts and was close to trading volumes in Brent front-month oil contracts in London, according to The Wall Street Journal. At the end of March, the benchmark Shanghai contract’s trading volume made up approximately 14 percent of the global activity in similar futures, or about half that of Brent’s volume. (1) The bulk of crude oil trading still takes place in the United States, where the benchmark is the WTI contract.

But despite a surge in volumes, most trading in the yuan-based contracts has been initiated by domestic, rather than foreign, players. INE data from mid-December shows that approximately 92 percent of the trading volume and about 80 percent of the open interest was accounted for by domestic Chinese traders. Retail investors accounted for slightly over three-quarters of the volume and over half the open interest. (2)

To become more successful, the market needs a more diverse group of participants, including producers, end users and international shippers to offset the dominance of the Chinese traders. There are also signs that trading in Shanghai is to a large extent driven by speculators. One indication is that trading volumes regularly far surpass the outstanding positions in the contracts. These factors suggest China still has a way to go before oil futures in Shanghai can become a truly international benchmark.

Since the 1970s, the U.S. dollar has been the default currency for pricing and trading in the global oil market. In 1974, the United States and Saudi Arabia signed an agreement committing the Saudis to accept only dollars for all its oil sales. A year later, dollar-only trading was extended to all of the members of the Organization of Petroleum Exporting Countries (OPEC). This created what became known as the petrodollar system, giving the U.S. the advantage of being able to use its own currency to purchase oil, while other countries that need to buy oil had to build their own dollar reserves. 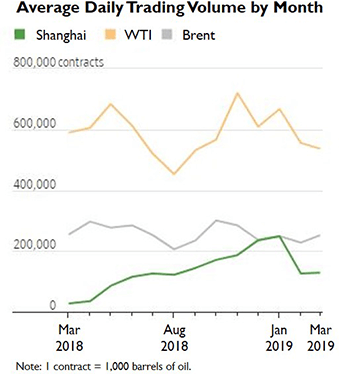 Those deals, and the petrodollar system that followed, were based on the U.S. being the dominant buyer of oil at the time. The U.S. consumed more oil in each year of the 1970s than China consumes today.

Things are different now. The U.S. has almost doubled its domestic crude production capacity over the past decade or so using shale oil technologies, which has made the country a net oil exporter for the first time in 75 years. Instead, China has become the world’s largest oil importer, with nearly 70 percent of its demand met by imports. China’s demand is expected to grow from a current level of approximately 600 million tons per year to more than 750 million tons per year by 2040. (3)

With limited domestic production capacity, China will likely continue to rely largely on crude imports. The yuan-denomination market allows Chinese commercial participants to hedge risk while paying in domestic currency which, in turn, will give the country more leverage to price global energy supplies. This is a prudent move for China, given its ever-accelerating dependence on foreign oil.

It could be years before the Shanghai futures really challenge the petrodollar system and the WTI or Brent crude oil benchmarks. It would require non-Chinese buyers to be comfortable with not just currency risk, but also the level of government involvement in INE trading, the dominance of Chinese participants and physical delivery at facilities controlled by Chinese companies.

In addition, structural issues within China’s oil industry, including the virtual monopoly of the nation’s top three state-run producers and the government’s firm grip on pricing, could hinder China’s effort to create a vibrant futures market. Ultimately it is the market comprised of buyers, sellers and financial traders who will decide, but substantial global trading of oil paid for with the yuan is an increasingly likely reality.