In the February 2010 issue of Pumps & Systems, I discussed my Suction Specific Speed (S) Calculator and its ability to predict the stable range of flow for a particular centrifugal pump. In November 2011, I wrote a follow-up that addressed the S value of wastewater pumps. Recently, I have seen some engineering specifications that limit S to a maximum of 11,000 for any wastewater pump. I disagree with this across-the-board limit for several reasons that I will address in this column.

In case you did not read my previous columns, I will start with a brief overview of suction specific speed. In the early 1960s, many pump users began to encourage their manufacturers to provide pump designs that reduced the required net positive suction head (NPSHr).

The NPSHr at the best efficiency point (BEP) flow is a function of the impeller design, and a major design characteristic is the ratio of the impeller eye diameter to its overall diameter. As this ratio increases, the entrance velocity decreases, and NPSHr is reduced. These large-eye impellers allowed pumps to operate satisfactorily in applications with low NPSH available (NPSHa).

There was, however, a down side. The peripheral velocity of the large eye also increased, and at some capacity, flow into the entrance was distorted because of the high peripheral speed.

This caused some of the flow to reverse direction and begin recirculation at the entrance of the eye (suction recirculation). This recirculation can result in intense vortices that cause cavitation and pressure pulsations.

The flow at which suction recirculation begins depends on the impeller design, but as the eye-diameter ratio increases, so does the recirculation point as a percent of BEP flow. The calculation for suction specific speed was developed to help predict the point at which suction recirculation could begin. As the value of S increases, the flow at which recirculation can begin moves closer to BEP flow. Guidelines were established that suggested that S values should not exceed a range of 8,500 to 9,500 for pumps that could potentially operate at flows that were significantly below BEP flow. Lower flows could be caused by dynamic changes in system conditions or by a throttle valve at the discharge.

Wastewater pumps are not designed for low NPSHr, but the large eye that is required for solids’ passage can reduce NPSHr and, therefore, increase the value of S in certain designs.

Let’s take a look at a couple examples. The two pumps described below have a 6-inch suction and are designed for a BEP rate flow of 1,500 gallons per minute at a total dynamic head of 60 feet:

NPSHr is very similar for both, but Pump A operates at 1,750 rpm, while Pump B operates at 1,150 rpm. Both have a specific speed (Ns) of around 2,200. Pump A has a relatively high eye-diameter ratio (0.54) which accounts for its low NPSHr. Pump B has a lower eye-diameter ratio (0.38), but because it operates at a lower speed, its NPSHr is also low. The calculations for S are 13,044 for Pump A and 9,363 for Pump B. Based on the engineering specification I mentioned earlier, (S max = 11,000) Pump A would not be an acceptable option. 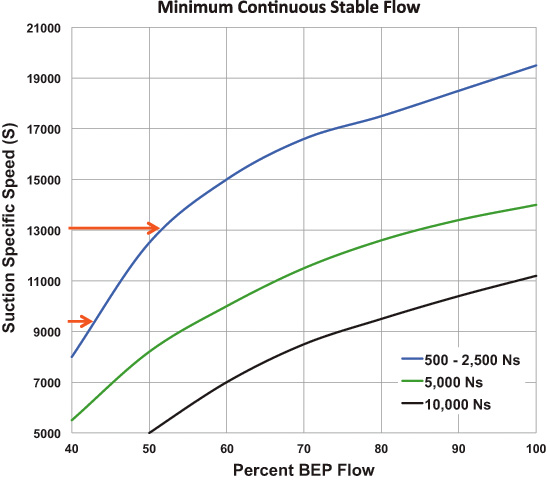 The reason I disagree with the suction specific speed maximum of 11,000 is that no wastewater pump should ever be operated anywhere near the two recirculation points shown in Figure 1. The reasons that they should not be considered have nothing to do with recirculation. The first is the cost of pumping. Once the process drops below about 85 percent of BEP flow, the cost per 1,000 gallons pumped increases substantially for most pumps.

The second reason is pump life. Once the process drops below 75 percent of BEP flow, higher head wastewater pumps will generate increased radial forces that will cause vibration and shorten the life of seals, bearings and wear rings. Why debate this? Why not just follow the engineer’s recommendation, and select Pump B? Well, you certainly can if you want to. The pump I used in my example is a high-quality unit, but so is Pump A.

The reason Pump A should be allowed is that its cost is about 40 percent lower because it has a higher rotational speed. In many applications, 1,750-rpm pumps will have a life span that is very similar to their lower speed cousins, making first cost a significant factor in the equation.

Let’s close with one more example. A higher head, higher flow pump is designed for 12,000 gallons per minute at 140 feet of total dynamic head. It has a 16-inch suction and a 22-inch impeller that rotates at 1,170 rpm. The Ns is 3,250 and the NPSHr is 21 feet. The calculated suction specific speed is 13,065, which is about the same as Pump A in the previous example.

Although the curve for Ns = 3,500 is not shown in Figure 1, the S value of 13,065 would intersect the curve at about 60 percent of BEP flow. Once again, this is well below where any wastewater pump should operate.

Remember also that NPSH margin plays a role in the suction specific speed’s predicted point at which recirculation can begin. Most wastewater applications are flooded suction and can take advantage of 100 percent of atmospheric pressure.

Also, suction submergence is typically high. At sea level, the pump in this example could experience an NPSHa to NPSHr margin of 2-to-1. In the previous examples, it could be almost 5-to-1.

In my opinion, there is nothing wrong with high S-value wastewater pumps as long as they are sized correctly for the application. After all, suction specific speed was developed to identify pumps that could undergo recirculation at significantly reduced flows when running at full speed. It should not be used as a fudge factor for poor pump selection or system design.

Joe Evans is responsible for customer and employee education at PumpTech Inc., a pump & packaged system manufacturer and distributor with branches throughout the Pacific Northwest. He can be reached via his website www.PumpEd101.com. If there are topics that you would like to see discussed in future columns, drop him an email.