Currently, two test procedures could be requested to qualify a quarter-turn valve design for fugitive emissions service: International Standards Organization (ISO) 15848-1 (2nd Edition, 2015) and American Petroleum Institute (API) 641 (1st edition, 2016). Both standards are technically viable options that can be used for valve qualification. Both could be considered good engineering practice since they clearly spell out conditions and procedures that help ensure the test is repeatable, and that it can be considered representative of the valve’s real life operating conditions. Either protocol can qualify valves for higher temperature service where graphitic seals are typically used and lower temperature service where PTFE-based seals are usually used.

The general process used by both standards is as follows: the valves are set up with blank flanges on both ends; fittings are installed on the blanks to allow the valve to be internally pressurized with test media (methane gas at 97 percent purity minimum as the standard in the U.S.). The static joints on the valve (i.e. bonnets and/or flange gaskets) are tested for leaks before starting the actual test. The valve is pressurized with the test gas, and the valve stem is then actuated a specific number of open and close cycles at ambient temperature.

Leakage measurements are taken at prescribed intervals using a calibrated leak detection unit that meets specific requirements spelled out in the standard (e.g. sensitivity, response time, etc.). Then, the valve is heated to an elevated temperature, which is determined ahead of time and is based on valve design and materials used and the stem cycling and measurement process is repeated. This cycle of ambient and elevated temperature operation is repeated a number of times. The number of thermal cycles depends on the standard used.

There are a number of major differences between ISO 15848-1 and API 641 that may steer a manufacturer or end user toward using one test method over the other. The key differences can be
grouped into the following: test conditions, number of stem and thermal cycles, valves qualified under the standard, related valve design standards that may reference either of the above referenced test methods and the end user’s specification.

The ISO procedure allows for the use of two different test gasses, helium and methane, each with different leakage measurement methods. In the ISO test, helium is measured by essentially bagging the test valve and measuring the mass leak rate of helium leaking through the packing set. If methane is used, leakage from the packing set is measured as a concentration (in parts per million by volume [ppmv]) using a vapor analyzer and ‘sniffing’ around the packing set. The ISO standard specifically states “… there is no correlation intended between measurements of total leak rate … and local sniffed concentration.” Also, since helium is generally not accepted as a suitable test medium by enforcement agencies in the U.S., and because current field monitoring techniques are done using ‘sniffing’ and not ‘bagging,’ only the methane portion of ISO 15848-1 would generally be considered a viable option for leakage measurement for valves destined for the markets where API valves are used or specified. The API 641 protocol uses methane and ‘sniffing’ only.

ISO 15848-1 follows a similar methodology using two defined temperature limits—400 C (752 F) for high temperature valves typically sealed with graphitic seals and 200 C (392 F) for the lower temperature valve applications. The test pressure is based on the maximum rated pressure of the valve at the chosen test temperature. As noted earlier, the ISO test can be done with either methane or helium. However, most test facilities will only do the 400 C testing using helium gas given the safety concerns with methane. The ISO standard also defines cryogenic temperatures for testing, -46 C (-50.8 F) and -196 C (-320.8 F), whereas there are no cryogenic parameters spelled out in API 641.

The test is considered passed if there are no emissions readings above 100 ppmv through the test and no stem adjustments to the packing gland are applied. Also, note that the API standard does not specify the type of service for which the valve is intended, i.e. control valve service or on/off (isolating) service.

For control valves, the three levels are CC1, CC2 and CC3. CC1 is 10,000 cycles at ambient followed by an equal amount at elevated temperature, CC2 continues with 20,000 more cycles at ambient and 20,000 at elevated temperature and CC3 repeats CC2 once more. In CC testing, all stem cycles are plus-10 percent of their stroke or angle from the midpoint of the valve stroke or angle. Speed of the stem is also dictated to be 1 to 5 degrees per second. One packing gland adjustment is allowed in each endurance class level (i.e. one in CO or CC1, an additional adjustment in CO2 or CC2, etc.). The ISO standard contains multiple leakage classes as well. If we consider only methane for the purposes of comparison to API 641, ISO specifies leakage classes- AM (≤50ppm), BM (≤100ppm) and CM (≤500ppm). 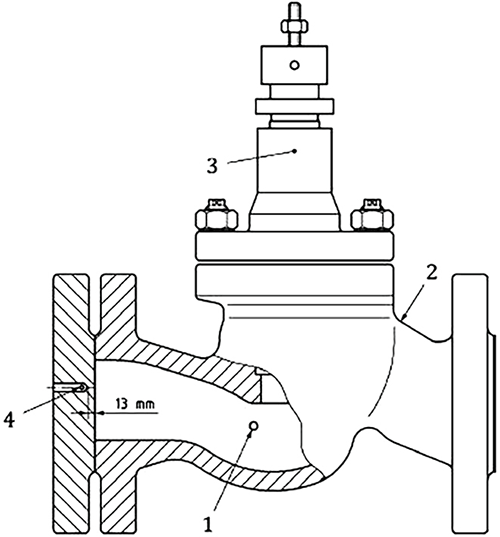 While on the subject of thermal cycles, another key consideration between the two standards is the measurement point on the valve from which the temperature for the test is monitored. (See Image 1 and note: valve shown is not a rotary valve and is used for illustration purposes only as found in ISO 15848-1, 2nd edition).

So, looking closely at the two standards, there are significant differences between the two. Number of temperature and stem cycles differs, one allows adjustments and one does not, and it is difficult to compare data given that the test temperature is defined differently in each standard. Both procedures, however, are considered examples of good engineering practice.

Which Standard Should I Use?

The answer will depend on the valve design standard that end-users are requesting. API 641 first edition was released in October 2016, whereas ISO 15848-1 is in its second edition, released in 2015. Either could be deemed acceptable assuming methane is used as the test gas. However, one has to consider what valve standards currently call out for required type tests, as well as what will be added to valve standards in the future. API has done this for multi-turn valves by adding a requirement to various standards such as API 600, 602, etc. specifying that the valves shall be API 624 compliant (which requires API 622 compliant packing) in order to be tagged as API 600 or API 602 valves.

The current editions of API quarter turn valve standards (API 608, API 609) do not have API 641 certification as a requirement. However, the next edition of API 608 will have this requirement added and API 609 and API 599 are expected to require API 641 testing as well. ISO is not referenced in any of the API standards, nor is there any expectation that it will be in the future. However, given the global environmental concerns, there is a good chance that ISO 15848-1 could be added as a requirement to international valve standards as they are re-published.

Phil Mahoney is principal managing engineer in the subject matter expert services group for the A.W. Chesterton Company. He holds a bachelor’s of science in marine engineering and an master’s in engineering management. With more than 27 years experience in the sealing industry, Mahoney has held positions in applications engineering, product management and new product development. He is the president of the Fluid Sealing Association.

Valves
How to Avoid Valve Closure Water Hammer
The more gradually a system can slow its flow, the better a pressure surge is mitigated.
Seals
Fugitive Emission Testing of Flange Gaskets
Examining the standards that guide gasket testing.
Valves
Ensure Safe Operation of Valves in High Pressure Applications
Understand how to maintain safety and reliability.
Seals
How to Contain Mixers & Agitators
Air seals prevent powder and slurry leakage in safety-focused and harsh industries.
Seals
Influence of Bearing & Seal Characteristics on Pump Vibrations
Understand the process of evaluating bearing and seal hydrodynamic and mechanical characteristics, as well as its modeling, in the frame of rotor dynamics analysis.