Research shows how energy targets can be achieved.
by Kyle Delpiano
Bell & Gossett
09/03/2018

At first glance, the sleek and sculptural 21-story Astor Place tower in New York City appears out of place in the heart of the bohemian East Village. But true to the spirit of the neighborhood, Astor Place is challenging convention and advancing the ideals of energy conservation and sustainability.

These advancements were accomplished through a collaboration among a water technology company, building manager Related Management Co. and the Sustainable Engineering Lab at Columbia University, to test assumptions of energy efficiency in a retrofit of the building’s hydronic heating, ventilation and air conditioning (HVAC) system, later documented in a doctoral dissertation.

The Astor Place Energy Improvement Project consisted of three primary steps: conducting an initial energy assessment of the hydronic system, updating the system with technologically advanced pumps and controls and adjusting the system in real time to evaluate the effects of the HVAC modifications.

The impact of energy efficiency improvements is often difficult to demonstrate at the individual system level because buildings typically get billed for energy use at the building level. According to Luke Falk, assistant vice president at Related and an adjunct professor at Columbia University, the partnership among the water technology company, building manager and Columbia University allowed stakeholders to gain a granular understanding of exactly how much energy they would save by implementing a complex HVAC enhancement.

The key finding from the testing was that right-sized pumps paired with variable frequency drives (VFDs) powering the chilled water portion of a hydraulically balanced system can deliver a 95 percent reduction in pumping energy, far exceeding the team’s expectations. 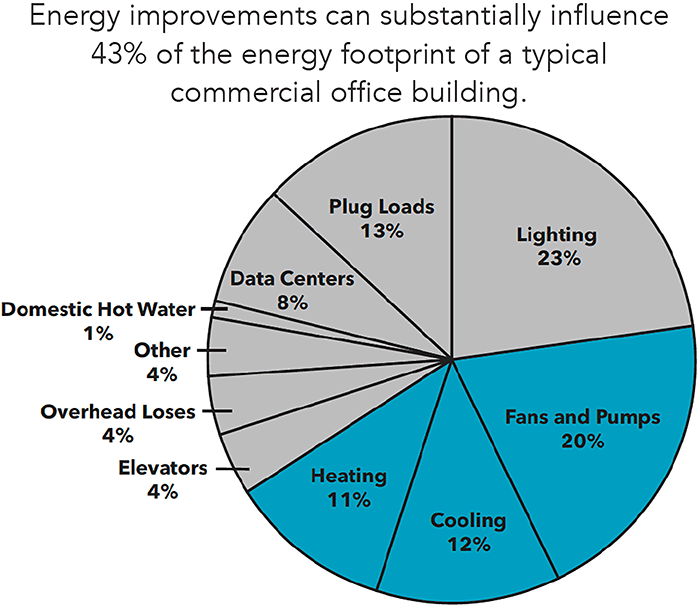 As noted by the Columbia research team: “The pumping electricity reduction with VFDs was far more significant than the effects of (reduced pump size and pressure-independent control valves): Annual replacement of the chilled water (ChW) distribution pump electricity was 92 percent lower with VFDs than without. “When comparing the combined effects of the replacement pumps and the VFDs, the ChW distribution pumping electricity reduction was 95 percent.”

Coupled with the findings in an American Society of Heating, Refrigerating and Air Conditioning Engineers (ASHRAE) Journal article that concluded energy improvements in the HVAC system could substantially influence 43 percent of a building’s total energy, this has a dramatic impact on the overall building energy footprint (see Image 1).

Astor Place was developed by Related Companies and completed in 2005. It includes 39 residential units with commercial space on the building’s first and second floors. The HVAC system uses hydronic space heating through boilers and cooling with central absorption chillers. Fan-coil units provide HVAC to residential floors; HVAC in the common and commercial spaces employs air-handling units. Only the central plant equipment and air handling equipment in the commercial and common spaces were included in the retrofit and subsequent evaluation. The approach to the ChW and hot water (HW) systems was nearly identical, though monitoring was more comprehensive on the ChW systems, the details of which are outlined here.

Other modifications included new piping to create primary/secondary chilled water loops out of the original primary only system and the addition of 7.5-hp primary pumps. Constant primary chilled water flow optimizes chiller performance. Decoupling the loops in the original one-loop system allowed for the installation of variable flow technologies on the secondary loop. New 15-hp pumps replaced the original 20-hp distribution pumps and were outfitted with VFDs.

The head losses were lower than expected, so the team was able to use smaller replacement pumps. This created more energy savings potential with the VFDs than on the larger pumps. Savings from dynamic adjustment using VFDs offset additional electricity required to operate the new primary pumps.

In providing their expertise, along with the pumps, drives and monitoring equipment for the project, the water technology company engineers obtained specific real-time data on pump and system performance.

The engineers simulate real-world conditions in laboratory testing, but they do not often get the chance to follow the pumps into the field to track performance data. The intent was to improve the energy efficiency of the system without modifying the heating and cooling loads. In the lab, manufacturers can test the efficiency of a pump, but in the real world there are often unexpected variables and more complex behavior within the system that affect efficiency.

Columbia University’s Michael Waite, a postdoctoral research scientist in professor Vijay Modi’s Sustainable Engineering Lab, predicated a research thesis on a new mathematical model to assess a building’s energy profile that was derived from the research data. “There is a clear research gap for the evaluation of hydronic systems for large buildings,” Waite said. “Their complex systems demand a different mathematical model and approach to predict energy use. You also need to get into the building to see how (it has) responded to the energy conservation measures you have made.”

Prior to the retrofit, nearly 30 percent of the building’s common system utility costs were for pumping electricity, due primarily to the pumps being oversized for the demands of the system and the constant speed operation at partial loads. Oversized pumps were found to cause unnecessarily high pressure differentials and flow rates in the system.

Oversizing pumps is a common industry practice. There are a number of reasons why, including adding safety margins beyond those factored into the design by pump manufacturers and accounting for marginal over performance at system peak loads. However, this common practice comes at a cost—namely increases in the system’s operation, maintenance and capital costs over the system’s life cycle.

When considering both heating and cooling, the retrofit resulted in a computed annual pumping electricity usage of 316 megawatt hour (Mwh), a 41 percent improvement in pumping energy requirements and an estimated 12 percent reduction in the building’s central operations’ energy bills.

Commercial buildings account for 36 percent of all U.S. electricity consumption and cost more than $190 billion in energy every year, according to the U.S. Department of Energy. With more than 80 percent of the existing commercial and institutional buildings in the U.S. expected to operate beyond 2030, as reported by the Colorado-based Rocky Mountain Institute, demand for HVAC system retrofits will be great.

In addition, the populous states of New York and California have in place some of the country’s most stringent environmental policies—much stricter than existing federal rules—dictating that efficiency will continue to be a major consideration in selecting equipment for retrofit projects, regardless of potential federal policy changes.

Centrifugal pumps installed in HVAC systems typically operate in variable load applications that see a fluctuation of flow requirements based on the heating or cooling load of a building at any given time. The original pumps specified for Astor Place were running at constant speed along with being oversized for the true operational demands of the building.

VFDs were the perfect solution to address the pump oversizing. Even at peak cooling load, electricity reduction was more than 50 percent compared to constant-speed pumps, according to the test data. VFDs do bring the most benefit in terms of energy consumption. The pumps consumed just enough energy to provide proper service for that part of the cooling loop. 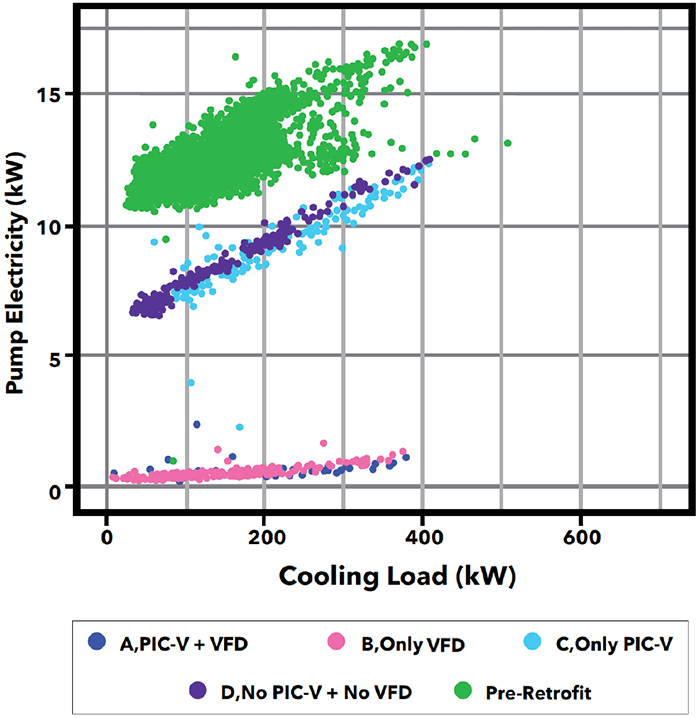 In addition to the VFD testing, the research team set up four retrofit combinations to collect additional data to assess the energy savings contribution of the various retrofit measures installed at the same time. The following scenarios were analyzed: 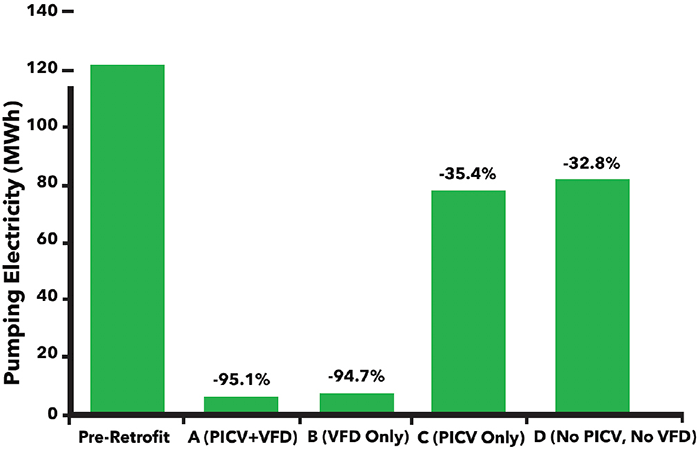 Sensors were installed at the end of each branch to provide vital performance data. All data was logged at one-minute intervals and accessed through a newly installed building management system (BMS).

The combination of VFDs and PICVs provided the most savings in terms of electricity consumption, detailed in Images 4 through 6. “A robust monitoring effort was essential to developing these fundamental understandings and the data needed to form analyses and to develop energy conservation measures,” Waite said. 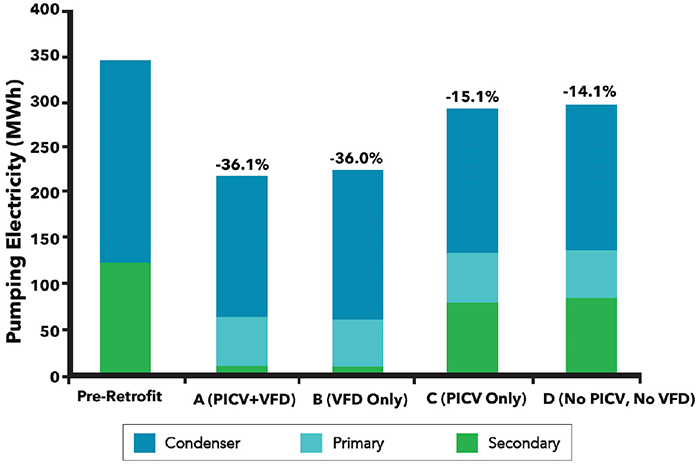 With all retrofits considered, the total annual cooling pumping energy reduction was computed to be 36.1 percent compared to the original system (see Image 6).

The data analysis of the pre- and post-retrofit conditions formed the basis for the mathematical model to assess energy consumption, calculating the following:

The mathematical model can provide a fast and accurate energy assessment of a hydronic system. From there, the team can install sensors at various points and recommend specific system improvements that can immediately reduce energy consumption and costs.

Monitoring system behavior at Astor Place yielded three primary benefits: determine if equipment was operating as designed; assess the amount of energy being used and the dynamic adjustments to the load’s demands; and gain a broader understanding of system behavior, the last of which is most intriguing for Waite.

“This will allow us to develop theories on how systems behave as a whole rather than a collection of individual parts,” Waite said.

For Related Management Company, the granular focus of the project was insightful. The project gave the company the opportunity to establish a clear chain of cause and effect when dealing with energy efficiency while driving value to the condo owners through energy savings.

As owners seek to improve efficiency of building systems, HVAC upgrades are often last on the list due to perceived high upfront costs. The results from the Astor Place Energy Improvement Project can help inform decisions about new equipment and the potential for energy savings.

“It’s not cost effective to replace a large pump as a stand-alone efficiency measure,” Waite said. “But if your BMS tells you that over a decade a 25-hp pump never operated over 15 hp, you can replace it with properly sized equipment that’s both cost effective and energy efficient.”

2. (Waite M, Deshmukh A and Modi V. Experimental and analytical investigation of hydronic system retrofits in an urban high-rise mixed use building. Energy and Buildings 2017;136:173-188.)

Kyle DelPiano is the business development manager for Xylem’s Americas Commercial Team. He also oversees industry training programs offered at the Xylem Bell & Gossett Little Red Schoolhouse. DelPiano is a graduate of Auburn University with a Bachelor of Science degree in polymer and fiber engineering, concentration in mechanics.