Two schools of thought exist with regard to centrifugal force. The one I support views it as a false force. The other side believes that it is real. That is the side that also believes Elvis is alive and well, but do not let that influence your opinion.

Centrifugal force (from the Latin meaning “center-fleeing”) is an apparent force.

Force Due to Acceleration
When you step on the gas pedal and your car accelerates, you feel what you think is a force pushing you backward in your seat. Once acceleration ends and speed is constant, that force seems to disappear. Of course, no force pushes you backward. It is the result of the forward force necessary to allow you to accelerate with the car.

Newton’s simple force due to acceleration is best described by Einstein’s equivalence principle. It states that one cannot distinguish between a real and a fictitious force when in the same frame of reference. Therefore, a spaceship accelerating at 32 feet/second/second in outer space would create a force indistinguishable from that of gravity to an observer inside the ship.

Einstein suggested that even gravity could be a false force, but he concluded that gravity (or any component of gravity) could be considered a false force only at a single point. This led him to suggest that the geometry of the earth and that of the universe cannot be explained in Euclidean terms. Gravity in four-dimensional space—where the sum of the angles of a triangle does not necessarily equal 180 degrees—can be considerably different.

Coriolis Force
The effect of the Coriolis force is an apparent deflection of the path of an object that moves within a rotating coordinate system. The object does not actually deviate from its path. It appears to because of the motion of the coordinate system. In the case of Earth, it is a result of the Earth’s eastward rotation and its differing tangential velocities at various latitudes.

If a long range gun is fired toward the North Pole from a point on the equator, its projectile will land to the east of its due north path. This occurs because the projectile is moving faster eastward at the equator than is its target further north.

The opposite occurs when the direction is toward the equator. If an airplane leaves Anchorage, Alaska and flies directly toward Miami, Fla., it will be over Mexico when it crosses Miami’s latitude. The Coriolis force also causes hurricanes to spin counterclockwise in the northern hemisphere and clockwise in the southern hemisphere. It does not, however, have any proven effect upon the vortex rotation of toilets in either hemisphere.

Centrifugal Force
The Dutch physicist and inventor of the pendulum clock, Christian Huygens, coined the term centrifugal force in 1659. Huygens believed that centrifugal force was a real force. His theory was supported by the German mathematician Gottfried Leibniz. Isaac Newton seemed to support the theory initially, but he eventually disagreed. He coined the term centripetal force in 1684 to describe what he thought was the only force that acted upon a body in circular motion. 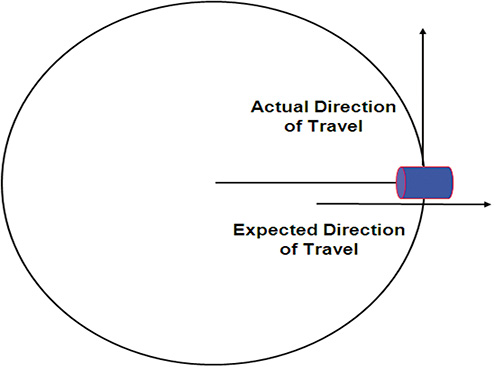 Figure 1. The direction of travel of a can swinging counterclockwise on a string

Figure 1 shows a can attached to a string swinging in a counterclockwise direction. It is a common misconception that centrifugal force pulls outward on the can. If the string were to break, that force would cause the can to travel outward (eastward). In fact, if the string breaks, the can will move in a straight line, tangent to its circular path. It does so simply because no centrifugal force acts on it.

Suppose that a person is inside the whirling can. The can presses against his feet and provides the centripetal force that holds him in a circular path. From our frame of reference outside the can, it is clear that this effect is due to inertia or the tendency of an object to follow a straight line path (as dictated by Newton’s first law). If, however, we change our frame of reference from inertial (stationary) to that of the rotating can, we lose our original perspective and experience something different. We will feel a force that pulls our bodies toward the bottom of the can. Although it feels real, it is not a force at all. It is the effect of inertia on our bodies. To observers in a rotating system, centrifugal force seems to be a real force.

What about that machine we refer to as a centrifugal pump? Is its operation based on centrifugal force? If so, it must operate under false pretenses. Although mathematically complex, centrifugal pump operation is intuitively straightforward. The pump’s impeller uses its vanes to channel or guide a fluid through an ever-increasing radius while containing it within a rotating system. This process causes the liquid to accelerate continuously as it navigates the radius and reaches some maximum velocity just as it reaches the impeller periphery. It then flows into the pump’s volute where velocity is transformed into pressure.

What then should we call such a pump? Maybe we could call it a radial accelerator pump or a rotational inertia pump or simply an impeller pump. Although many descriptions may be more accurate, I’m afraid that we are stuck with centrifugal.

Joe Evans is responsible for customer and employee education at PumpTech, Inc., a pump & packaged system manufacturer & distributor with branches throughout the Pacific Northwest. He can be reached via his website www.PumpEd101.com. If there are topics that you would like to see discussed in future columns, drop him an email.