Total Head for the Pump & System

This foundation is beneficial to understand while working with an entire system.
by Pete Gaydon
Hydraulic Institute
10/08/2021

The term “total head” (H) is used to describe the energy in pumping systems and is how manufacturers represent the performance of their pumps as a function of flow rate. Total head is also commonly referred to as total dynamic head (TDH); however, the Hydraulic Institute (HI) uses the term total head and it will be used throughout this article.

It is important to understand the nuances of what makes up the total head of the system as a function of flow rate and varying system conditions so that if a user is designing or operating a pump system, the pump can be selected and operated properly. Additionally, if the goal is to measure the pump performance after installation, it is important to understand how to do that in the same way that the pump manufacturer will.

Total head (system) is made up of three components:

Pressure head is the difference in pressure between source and destination. For example, if taking liquid from a lake at atmospheric pressure and delivering it to a tank that had 10 pounds per square inch (psi) above atmospheric pressure, the pressure head would be 10 psi expressed as feet of the liquid being pumped. The conversion between pressure and head is described in the pump total head measurement section.

Friction head is the head loss in the system due to friction and is a function of the liquids velocity or flow rate squared. As mentioned, the friction loss will depend on the flow rate but also the size of the piping, fittings, valves and end use equipment in the system. If there are control valves in the system that are used to actively regulate the flow rate, the friction loss across the control valve is referred to as control head. It is important to understand control head because it is often a source of energy consumption that can be improved.

IMAGE 3: Pump and system curve intersection is the operating point

A free resource that provides additional tutorial information on this topic and includes a friction loss calculator is the Hydraulic Institute’s Engineering Data Library, which can be accessed at edl.pumps.org. For complex systems with many pieces of equipment and branches, it may be difficult to calculate the total head for the system by hand and hydraulic modeling software should be used. Some noncommercial versions of hydraulic modeling software are available as a free resource at pumps.org/freetools. A simplified equation for total head (system) is expressed in Equation 1 (page 100).

The equation for total head (pump) can be expressed in Equation 2.

When doing the calculation, attention will need to be paid to units to get the calculation to come out correctly. With U.S. customary units, it is common to use a relative density called specific gravity and a conversion constant to convert pressure to feet. This can be done using Equation 4.

Total head is a fundamental that is beneficial to understand when working with pumping systems. It provides an understanding of the system requirements, valuable information for pump selection, and a key consideration of energy consumption. This article covers the basics but does not discuss in-depth review, calculation examples or scenarios that pump professionals will come across. For more information on this topic, including standards and training, visit www.pumps.org. 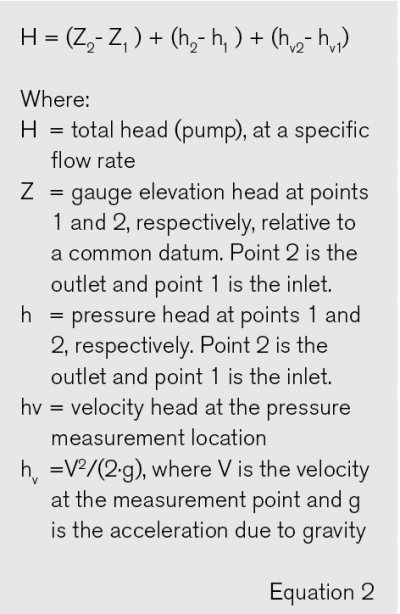 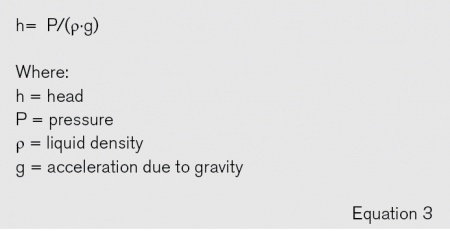 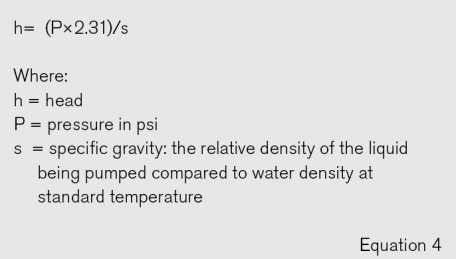 Pete Gaydon is technical director for the Hydraulic Institute. He may be reached at pgaydon@pumps.org. For more information, visit www.pumps.org.