This technology self-lubricates, reduces friction and performs in wet or dry operating conditions.
by Mark Slivinski
09/02/2014

An article in the June 2009 issue of Pumps & Systems detailed a new technology to treat the surface of silicon carbides. The treatment is not a coating and not homogenous with depth. Since the publication of this article, independent parties have tested the treatment and returned the results from several applications. This article summarizes some of those tests.

The technology involves treating a finished silicon carbide (SiC) component with a specific chemistry that etches the silicon from the surface of the SiC and leaves behind the carbon.

This process occurs at the nanoscale. The silicon is removed, and the carbon—which was initially reacted with the silicon and sintered into the SiC substrate—remains in its original, covalently-bonded crystal lattice. During the reaction, the carbon further reorganizes into various nanospecies and creates a treatment zone as shown in Image 1. 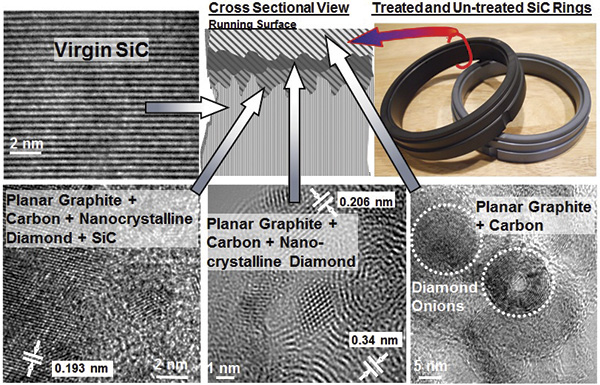 These transmission electron microscope images are taken at different depths within this treatment zone. Its outer zone is mostly planar graphite and disordered carbon, giving the surface a controllable, low coefficient of friction in the range of 0.08 to 0.12. Nanocrystalline diamond combined with the carbon and graphite emerges further down into the surface. Eventually, all these constituents merge with the virgin SiC, where SiC and all carbon nanospecies are present.

As the surface runs in, it operates at the robust zones in which graphite, carbon and nanocrystalline diamond provide a tough,low-friction running surface. Because it is not a coating, and the carbon is covalently bonded to itself and the supporting SiC substrate, this technology cannot delaminate, spall or peel off. Compared with current sealing surface solutions, the resulting treated surface runs cooler, longer and withstands significant periods of dry running. It has never delaminated in 25 years of rigorous testing.

All the recent tests, detailed in this section, had the hard/hard running combination of a treated SiC surface against another SiC-treated surface.

A seal pair was run in rigorous water test in conditions that typically damage sealing faces, as shown in Figure 1. The water test lasted for 350 hours. Next, the pump was drained, and the seal was run for another 75 minutes in dry nitrogen before a temperature spike stopped the test. This test proved extensive wet- and dry-running capabilities, even after running under rigorous wet conditions. No leakage occurred throughout the combined test.

Figure 1. Results of a mechanical seal tested for 350 hours in water followed by 75 minutes of running in dry nitrogen

Dry nitrogen is difficult to seal with plain, fully contacting seal faces. The 2009 article showed that treated surfaces actually ran with lower friction in pin-on-disc tests than in ambient air. Several mechanical seal tests in dry nitrogen have been conducted. Some were fully dry, without the pump being wet before the dry running. Specialized treatment for silicon carbide surfaces has survived tests in dry air or nitrogen for durations ranging from 45 minutes to four hours at aggressive pressure velocity conditions of between 6,000 and 80,000 psi-feet/minute (ft/min). The surfaces typically did not groove. They remained smooth and continued to provide a good sealing surface. These tests demonstrate that treated seal faces run well in dry air or nitrogen environments. This performance characteristic can provide long-running life for pure dry mixer seals and lightly loaded safety seals.

Another mechanical seal example tested automotive water pump seals. The industry standard stress test for these products includes a 15-minute dry-running test. The seal face materials currently used in this industry have difficulty meeting this standard. Figure 2 shows the results of a seal assembly subjected to five tests, at increasing shaft speeds, for one hour and 15 minutes of total dry-run time. The seal assembly was allowed to cool to ambient temperature between runs. Some tests of the untreated assemblies were stopped before 15 minutes had elapsed.

The results showed erratic temperature behavior from the untreated seal rings and damage to the elastomer bellows. The cumulative wear from the five tests was a 20-µm wear scar on the mating ring. In contrast, the treated seal faces ran at low temperatures with normal trends. The profilometry showed no discernible wear, and the seals did not leak under a 25-psi air pressure leak test.

These results demonstrate that treated seal faces enable dramatically longer run times in normally lubricated situations. They also survive extended flashing or dry-running conditions for much longer than other solutions. Field examples have shown that this technology lengthens the running life in flashing hydrocarbon service by a factor of 12. Since the surfaces remain smooth even after flashing or dry running, they survive through process upsets that would normally require shutdowns for pump repair because of seal damage. This is because the treated seal faces stay smooth and enable the pump to recover, be rewetted and run after a process upset without the seal leaking.

The treatment also enhances the performance of bearings. One manufacturer demonstrated improved dry startup capability in a hydrodynamic bearing contained in a downhole pump. In operation, the pump runs dry for five to 10 seconds at startup before dirty water floods the bearing chamber. A test was performed in dirty water with 35 stop/starts—25 forward and 10 reverse. While this test typically destroys SiC hydro pads and thrust plates, the treated components were unharmed. The components were able to be reused in another pump and placed into service.

Image 2 shows the results of a hydrodynamic bearing test with treated components. The test was conducted in water with a load that increased incrementally until twice the normal load-bearing capability was reached. As the image shows, the components experienced no discernible wear. Profilometry measurements also showed no discernible wear. The assembly may have been able to support even higher loads.

Image 2. The treated thrust plate (left) and thrust pads (right) with no discernable wear at twice the normal maximum load

While treated components have not been tested in the sleeve bearing parts of mag-drive pumps, it is expected that they would protect equipment from damage during dry running. Specially treated SiC components have been demonstrated to run well when mated with certain metallic components. This flexibility makes the technology ideal for protecting mag-drive pumps with either metallic or carbide shafts from damage during dry running.

This technology allows an improved running surface to be synthesized on a finished SiC component in a net shape, size and roughness process that does not add any new material or require post-treatment polishing. The surface derives from the virgin SiC, where the silicon is etched out of the surface while the carbon already contained in the SiC stays in its original crystal lattice and transforms into carbon nanospecies—including planar graphite and nanocrystalline diamond.

The resulting surfaces demonstrate the ability to run for extended periods wet, dry and during flashing. After operating in demanding conditions, the surfaces are still smooth and able to seal. This technology allows fluid-handling equipment to be rewetted and run after process upsets without stopping the fluid loop to repair damaged mechanical seal rings. Because of decreased friction, seals employing this technology run cooler. This reduces flashing conditions and enables the seal to survive the flashing. The dramatically reduced wear and grooving directly translates to significantly reduced emissions from single seals. Dry nitrogen performance allows long duration and quiet running for pure dry mixer applications. Load bearing capability for hydrodynamic bearings can be substantially increased, and dry running capability for sleeve bearings can be enhanced.