Troubleshooting Pumps in a System

This series focuses on evaluating piping systems for which calculated results do not match displayed plant instrumentation. Part 1 ("Troubleshooting Pumps in a System," Pumps & Systems, December 2015) examined the components of the pump and drive, and the conclusion of this series will examine possible causes for an increased discharge pressure. 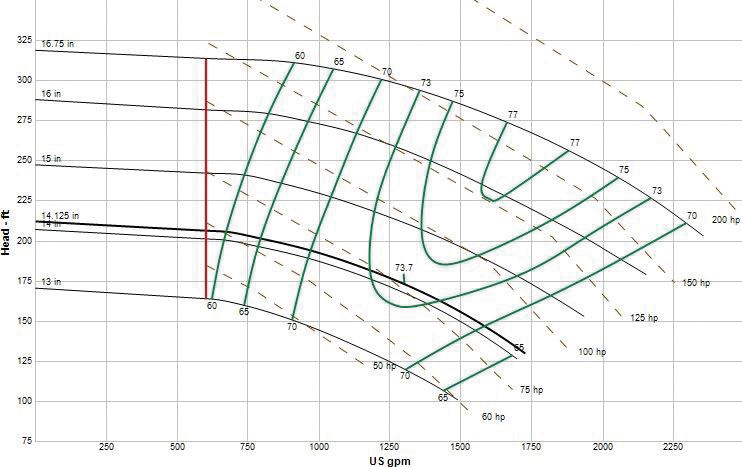 Figure 2. Manufacturer's catalog pump curve for the installed centrifugal pump PU-101, which is a 6x4-17 end suction pump operating at 1,780 revolutions per minute (rpm). The installed pump was supplied with a 14.125-inch impeller by the manufacturer to meet the original design point.

This cause, however, can be ruled out for a variety of reasons. First, with a flow rate of less than 1,000 gallons per minute (gpm), less head loss would occur in the suction pipeline, resulting in a higher pressure at the pump suction pressure gauge that was not observed. Second, the pump curve for the 14.125-inch impeller shows that the pump's shutoff head is 212 feet, a 16-foot head increase over the normal pump head of 192 feet at 1,000 gpm. A fluid density of 62 pounds per cubic foot (lb/ft3) would result in a pressure increase of 8.6 pounds per square inch (psi), which is less than the observed 16 psi pressure increase. Finally, because the control loop is set to 1,000 gpm and the flow indicator FT-101 shows 1,000 gpm, we have independent validation that the flow rate is accurate.

A few quick calculations determined that a density increase of the process fluid from the normal 62 lb/ft3 to 73 lb/ft3 would result in an increase of 16 psi on the pump discharge. The change in fluid density would also cause an increase in the pump suction pressure because of the liquid level in the supply tank. This is a rather small change in suction pressure, and it may be masked by normal system operation. As a result, a change in fluid density is a viable cause for the discharge pressure increase.

This change in density could occur with a change in the process fluid, the fluid's concentration or the fluid temperature in tank TK-101 as seen in Figure 1. A discussion with the plant process engineer revealed that no change in process fluid that could have caused an increase in the pump discharge pressure had occurred in the system in the past six months.

The operating data shows that an increase of 16 psi for a fluid with a density of 62 lb/ft3 results in an increase of 37 feet of fluid. The supplied pump curve reveals that an impeller diameter of 15 inches results in an increase of approximately 37 feet of pump head. Because changing an impeller's diameter requires disassembling the pump, the plant engineer checked with the maintenance department to see if any work had been performed on the pump. Maintenance records showed that the impeller was replaced four months earlier. The damaged impeller was replaced with an impeller diameter of 15 inches instead of the previously used 14.125-inch diameter.

Figure 1. Normal operating conditions for the example fluid piping system as calculated on the piping system model (Graphics courtesy of the author)

The maintenance record was updated to reflect the 14.125-inch impeller so the same problem would not occur. Maintenance was interested in keeping the impeller at 15 inches until it needed to be repaired again. A quick calculation determined that keeping the impeller at 15 inches instead of the specified 14.125 inches would result in a $10,000 increase in annual pumping cost. Because the pump was in service for five years before needing an impeller replacement, plant management decided to take the corrective action of trimming the impeller to 14.125 inches during an upcoming planned maintenance outage.

In this example, we investigate the possible causes of low discharge pressure in the same pumping system, and through the process of elimination we will narrow in on the probable cause. The system represented in Figure 1 has two identical pumps in parallel. One pump is operating and the other is on standby. The pumps are alternated each month to balance the number of operating hours between them. After shifting from the PU-101A to the PU-101B pump, the plant operator checked the system. Table 1 compares the observed results with the validated results. The discrepancy was turned over to the plant engineer to troubleshoot.

Discussions with the operator revealed that the pump did not sound like it was cavitating. The only sure way to identify cavitation is to calculate the net positive suction head available (NPSHA) at the pump suction and compare it to the manufacturer's supplied curve for net positive suction head required (NPSHR). Quick calculations showed that the NPSHA at the pump suction was 46 feet of fluid, and the NPSHR from the pump curve is only 8.3 feet of fluid. As a result, pump cavitation can be ruled out.

Change in the Process Fluid

Changes in process fluid can cause a reduction in discharge pressure. A change in the process fluid's viscosity can also cause major changes in pump performance.

Pumping a process fluid with a higher viscosity than that of water will produce less head at a given flow rate while reducing the pump's efficiency. The method for calculating the viscosity correction for pumps is outlined in the American National Standards Institute/Hydraulic Institute (ANSI/HI) 9.6.7 Effects of Liquid Viscosity on Rotodynamic Pump Performance standard. The method is much more complex than correcting the pump's differential pressure for changes in density, but most manufacturers' supplied selection software automatically perform viscosity corrections based on the ANSI/HI standard

One possible cause for a reduction in pump head is a worn impeller. This can be caused by a pump cavitating for an extended period of time. Also, process fluid containing solids or abrasives can cause erosion to the impeller. The pump was not experiencing cavitation and the process fluid is a clear liquid with no grit, ruling out erosion to the pump impeller.

In an open and semi-open impeller, the leakage joint is between the rotating impeller and the stationary pump casing. For an enclosed impeller, the leakage joint occurs across the pump's wear rings. If there is excessive clearance in the leakage joint, the pump will not operate per the manufacturer's pump curve. Excessive internal leakage causes a reduction in pump head, flow rate and pump efficiency. The shape of the pump curve for the increased internal leakage is not a concern, but what we are able to gain from the model is that the pump is not operating as supplied and needs to be repaired.

Looking at the Motor

Another way to find out if a pump is operating properly is to measure the pump drive's power consumption. The motor's installed power meter can be used to determine the power consumed. The current motor power can be compared to the motor value obtained during the validation process. A motor drawing more or less power than determined during the system validation can indicate a problem with the pump element.

In this article, we looked at two observed conditions dealing with a pump in a system. During the troubleshooting process, we considered a variety of possible conditions that can affect the system. When troubleshooting, end users must first consider all possible causes for the expected problem and then eliminate them one at a time based on knowledge of the individual system components and their interaction within a system.