Understand the Effects of Premium-Efficient Motors on Older Pump Systems

Many users have replaced worn-out motors on older pumps. Close-coupled pump motors made before late 2010 did not have a regulated efficiency. In one recent case, a user replacing a 7.5-horsepower (hp), two-pole motor discovered that the motor had been drawing more than its nameplate amperage. This was because the old motor operated at 3,419 revolutions per minute (rpm) and the new motor at 3,542 rpm, which meant the pump was actually drawing 8.3 hp rather than the rated 7.5 hp—and producing more water flow. To adjust output, the pump’s impeller would need to be changed or trimmed based on input from the pump manufacturer.

In the motor catalogs of many manufacturers, the speed is often shown at the motor’s synchronous speed (3,600, 1,800, 1,200 rpm, etc., for 60 hertz [Hz]) rather than the actual speed. Actual speed is a result of slip in the motor needed for it to produce torque. Generally, as efficiency increases, the slip decreases, resulting in a higher-speed motor. But there are no strict rules on how much speed a motor might gain with an efficiency increase because this depends on the motor manufacturer’s design. There also may be differences in the designs between manufacturers. Some existing two-pole motors could be 3,450 rpm, while others of the same ratings are 3,470 rpm. 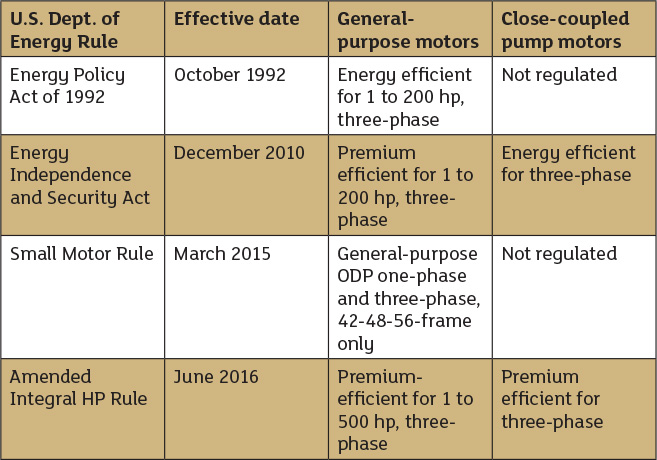 Another consideration when upgrading to a premium-efficient motor is that its physical size may be larger and its weight will be higher. The National Electrical Manufacturers Association (NEMA) frame and footprint should be the same, but the motor body may be longer to hold the additional active material needed for higher efficiency. The inrush current may be higher resulting in a higher kilovolt-ampere (kVA) code, and the heaters in the starter may need to be changed. In summary, there may be a form, fit and function issue that needs to be resolved.

Premium-efficient motors were introduced in the early 1980s, but an official NEMA standard was not released until mid-2001. Upgrades to premium motors were voluntary until December 2010. With the amended U.S. Department of Energy rule going into effect in June 2016, almost all 1- to 500-hp three-phase motors manufactured today are premium-efficient.

Instead of controlling flow with a valve, the pump’s speed may be throttled by adding a variable frequency drive (VFD) to the system. This VFD changes the input voltage to a pulse-width modulated wave form, which supplies the motor with a different voltage/frequency to reduce the motor’s speed.

The VFD changes the alternating- current (AC) sine wave to direct-current (DC), then chops it up into a pulse-width modulated wave form, which simulates a sine wave.

Because most pumps are centrifugal type, the load characteristics are favorable to the motor heating. This simulated wave form has harmonics that add losses to the motor and cause more heating than sine wave power. Additionally, the motor operating at lower speed has less cooling air from the fan to carry away the heat.

In many cases, the VFD allows the pump to be set to follow a set pressure and to adjust the pump output as demand changes. A VFD system provides large energy savings over a valve to control flow. As the pump speed is reduced, the hp required from the motor is reduced by the cube of the speed change—called the affinity law.

When replacing a motor on an older pump, be mindful of the higher speed for newer premium-efficient motors that may result in the pump producing more flow and operating the motor above its rated load point. The pump impeller may be trimmed or replaced to reduce this load, or a VFD may be added to operate the motor at speeds to match the flow requirement.

John Malinowski is the senior manager for industry affairs at Baldor Electric Company in Fort Smith, Arkansas. Malinowski is a senior member of IEEE and a member of the IEEE Industry Application Society. He serves on the IEEE Pulp & Paper Industry Committee, is active with the IEEE Petroleum and Chemical Industry Committee, and serves on several IEEE Standards Working Groups. He is immediate past chairman of NEMA MG1 Motor & Generator Section and Baldor’s representative for several energy advocate organizations.

Motors
Eddy Current Array: An Advanced Form of Eddy Current Testing
A regular maintenance schedule can help users achieve the benefits.
Motors
How VFD Technology Reduces Fan & Pump Downtime
Learn how to implement this technology to help with maintenance and energy costs.
Motors
Retrofitting a Motor Control Center
Upgrading instead of replacing can be a practical solution to improve motor reliability.
Motors
To Repair or Replace?
How to assess the motor system and evaluate components that are under par.
Motors
Benefits of Inverter Duty Motors Driven by VFDs
Consider pump selection and running time to reap the most benefits of the overall system.