What viscosity oil should be used with rolling element bearings? 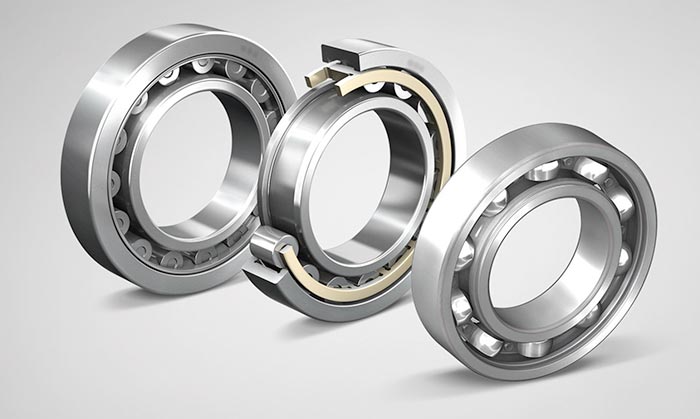 The viscosity and type of lubricant used will depend on the bearing design and service. Rolling element bearings (Image 1) in process pumps are lubricated by grease, mineral oil or synthetic oil. When selecting a lubricant, it is important to consider that the primary purpose of oil, or the oil constituent of grease, is to separate the rolling elements and raceway contact surfaces, lubricate sliding surfaces within the bearings and provide corrosion protection and cooling.

Viscosity is an important property of a lubricant, which supports the function of a lubricant in reducing friction and wear. A protective oil film is required to perform these functions. The three basic oil film conditions are referred to as:

Oil in process pumps is typically an ISO grade 32, 46, 68 or 100. These numbers relate to the kinematic viscosity in centistokes. The oil can be hydrocarbon oil, although synthetic oils are used for specific lubrication applications.

The viscosity of synthetic oil is less sensitive to temperature changes and more widely used when temperature fluctuations exist. If temperature also exceeds 100 C (212 F), a synthetic is recommended because the oxidation rate of mineral oil accelerates at higher temperatures.

Use of the correct viscosity lubricant for the speed, temperature and loads ensures the development of a full oil film between rotating parts. The optimum fluid film is sufficiently thick to allow the rolling elements to function without metal-to-metal contact with minimum friction. The functionality of the lubricant is negatively affected when the incorrect viscosity is used.

When viscosity is too low, it can cause mixed or boundary lubrication with resulting heat generation and component wear. Excessively high viscosity will prevent metal-to-metal contact, but will generate unnecessary heat and loss of power as the rolling elements are forced to plow through the oil film.

When is grease used as a bearing lubricant?
The use of grease is primarily limited to lower-horsepower pumps where the parameters are in size and speed range of rolling element bearings.

Advantages to grease lubrication include being less sensitive to level pump installation and simplified maintenance.

Disadvantages to grease lubrication include: