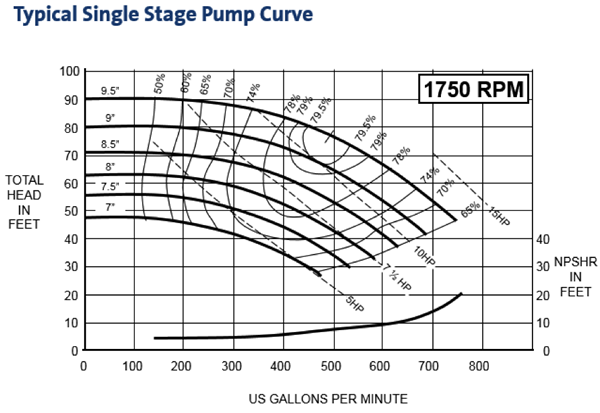 In my last column ("Tips for Proper Pump Selection," Pumps & Systems, May 2016, read it here), I briefly mentioned "drooping pump curves" and stated that I would spend time in a future article discussing the subject.

A drooping pump curve is a characteristic head-flow pump performance curve that does not continually rise when moving from the best efficiency point (BEP) back to shutoff. In fact, the curve reaches a high point prior to zero flow, then declines as it approaches shutoff. Just as misinformed discussions have led to a notion that pumps with suction specific speeds (Nss) above 11,000 should be avoided, pumps with drooping curves have been incorrectly outcast to the pump graveyard.

A pump with a drooping curve could rapidly "hunt" or oscillate (fluctuations in pressure and flow resulting in instability) when operated in certain ranges—in other words, it is unstable. Because there are now several operating points to cover, the pump does not know where to operate, and it tries to meet both conditions, usually failing in the attempt.

Many industry standards and end-user specifications require that the pump performance head curve continuously rise from the rated condition point (or BEP) as the flow is simultaneously reduced to zero. These are referred to as "stable curves." It is common to state the minimum acceptable increase, which is usually 8 percent for a single pump and 10 percent for pumps in parallel operation. To put it another way, the curve has a negative slope as it moves to the right from the zero flow shutoff point to the rated condition point, which should be in the best operating range for the pump.

In many cases, a continuously rising pump curve is a good decision, but it is not always required.

A centrifugal pump is a simple machine and will operate on its performance curve at the intersection of the system resistance curve, if it is possible for the pump to operate at that junction. The intersection of system curve and pump curve may not match the manufacturer's published curve for several reasons, including worn or incorrectly set clearances, a liquid with viscous properties (fluids other than water), or a different speed or diameter. Another reason may be that the system resistance curve was not correctly calculated.

A centrifugal pump will supply the flow rate that corresponds to the system friction, also referred to as the resistance (resistance curve). A pump with a drooping curve will intersect the system resistance curve (SRC) once, but that corresponding value of head (pressure) may occur twice on the pump curve—that is, once at the SRC intersection and again at another point where the curve droops to that same value. The pump will valiantly attempt to meet both points of flow for the same head requirement. There may be a large flow difference between the two points. For example, the pump head curve initially intersects the system curve at 340 gallons per minute (gpm), but the head (pressure) also corresponds to a point at 100 gpm. Note both flow rates would have the same total head (or pressure) point. The difference in flow rates is 240 gpm.

Assume the pumped fluid is water with an approximate weight of 8.33 pounds per gallon, which yields a weight (mass) difference of 2,000 pounds, or 1 ton. While trying to meet both flow rate conditions, the pump could experience oscillations several times a minute or even every few seconds. Now imagine this ton of water speeding up and slowing down and changing direction every 5 seconds or less, and you understand why this is a condition you want to avoid. The forces imposed often exceed the strengths of the components. This scenario is compounded when the system has an open design, in which the pump is supplied by an open tank or other source and then pumps to an open system. When the pump is supplying a closed system, such as a pressurized tank or boiler, the pressure from the closed portion acts like a shock absorber and mitigates the harmful effects.

Several decades ago, I saw a pump with a 40-inch discharge and drooping curve destroy itself and the system piping in just a few minutes of operation. I estimate that the rated flow on that pump was 50,000 gpm. This catastrophic effect was not caused by a drooping curve but by improper design and operation. Note that this system was an open design; it was pulling "makeup" water from a lake to an open cooling pond.

Globally, tens of thousands of pumps operate reliably and efficiently with drooping curves. These perform well because the system curve and the operating curve intersect at a condition point in a safe region, where oscillations and fluctuations are not created by a pump trying to operate simultaneously at two points.

The head capacity curves of many vertical turbine pumps, with specific speeds typically near 8,000, have small hairpins or dips at points away from the BEP. This characteristic shape is also known as discontinuous head.

If your system requires that the operating point cover a wide range, a continuously rising curve will be better. Many boiler feed pumps operate with relatively flat curves, not drooping curves, with only a slight rise to shutoff. Part of the reason this is feasible with boiler feed pumps is that the boiler is not an open system and the boiler pressure acts like a shock absorber, accumulator or dampener.

If you operate centrifugal pumps in parallel, then the pump curves must continuously rise to shutoff. Industry practices recommend that the rise be more than 10 percent, and I strongly advise that the rise for each pump be as close to identical as possible.