Vacuum Pumps and Compressors for Ethanol and Biodiesel Production

A look at the role that liquid ring vacuum pumps and compressors play in the ethanol and biodiesel production process.

The energy requirements of our society are increasing, but the supply of fossil fuels is limited. Alternative fuels for combustion engines using renewable resources are very promising alternative energy sources.

Processes and technologies for the production of fuels from renewable resources, or biofuels, are well-engineered. These technologies, together with the escalating costs of fossil fuels, make biofuels economically attractive. From an environmental point of view, biofuels have the advantage of burning "CO2 neutral." Increasing political awareness has also created the legal framework for the production and use of biofuels.

The term "biofuels" refers to the final products: bioethanol and biodiesel. These end-products are manufactured by different processes. Usually, a fermentation process is used for the production of bioethanol (using sugar-rich crops), and a transesterfication process for the production of biodiesel (using oil-rich materials)-sometimes hydrolysis or other processes are used depending on the feedstock. Basically, almost all biological material can be used as a feedstock for biofuels. However, the suitability of these processes depends on biological characteristics like sugar or fat content.

Liquid ring vacuum pumps and compressors are used in several biofuel production areas in both the fermentation and transesterification process.

Liquid carry-over can accidentally come into the vacuum system, so liquid ring pumps are designed to handle liquid carry-over and continue running reliably. They can use water, ethanol or biodiesel as the seal liquid.

Vacuum and Compressor Systems in the Fermentation Process 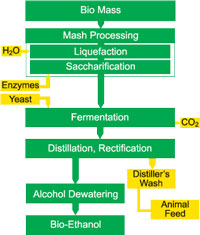 In fermentation processes, biological materials are transformed into other substances through the use of bacteria cultures, cells, fungi or added enzymes (fermenters). Bioethanol is then extracted by distillation. The distillation columns work under different levels of pressure and vacuum to keep the evaporator and condenser in equilibrium.

Liquid ring vacuum pumps are mainly used during distillation and rectification. The vacuum reduces energy consumption of the process and guarantees an economical production of the final product. During the dewatering process, a variety of separation and filter applications are used with vacuum, e.g., molecular sieves.

Vacuum and Compressor Systems in the Transesterfication Process 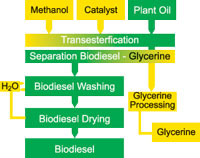 Prior to the transesterfication process, plant oil is extracted by pressing and then purified (refined).The refined plant oil is then transestered with methanol, creating methylester.

Liquid ring vacuum pumps and compressors are used in the separation of biodiesel and glycerine, extracting wet and saturated gases with vacuum. They also work in tank filling and emptying, in methanol recovery and glycerine purifying. In the biodiesel washing and drying processes, several filter processes also operate under vacuum, which are supported by liquid ring pumps.

With the increasing prominence of alternative fuels, liquid ring vacuum pumps and compressors will play an ever important role in the production process.

Compressors
Compressor Oil Sales Increase as Need for Equipment Efficiency Rises
Opportunities are plentiful in Latin America and MEA countries.
Compressors
The Basics of Blowers
Complicated selection process can make these common equipment items mysterious to specifiers.
Compressors
5 Benefits of Direct Drive Motors in Large Air Cooled Condensers
How One Plant Flourished After Installing a Direct Drive System
Pumps
6 Global Factors Affecting the Pump Market in 2017
Many of these factors relate to the ongoing instability in various parts of Europe, but in today’s interconnected global economy, innumerable current events and trends can impact the marketplace.
Compressors
Compressors Assist in Propane Transfer Transition
When the Cochin pipeline stopped delivering propane into the U.S., Minnesota-based Alliance Midstream established a new rail-supplied facility.