The Jordan, Knauff & Company (JKC) Valve Stock Index was down 14.7 percent over the last 12 months, while the broader S&P 500 Index was up 14.0 percent. The JKC Pump Stock Index also decreased 14.7 percent for the same time period.1

The Institute for Supply Management’s Purchasing Managers’ Index (PMI) decreased to 52.9 percent in February. While a reading above 50 percent still suggests expansion in the manufacturing sector, this is the lowest index reading since January 2014. The average reading for the last 12 months is 55.7 percent. Likely factors for the decrease include falling energy prices, a stronger U.S. dollar, slow demand overseas and the issues at the West Coast docks. The Employment index fell 2.7 percent to 51.4 percent, the lowest point since 2013. On a brighter note, the backlog of orders increased to more than 50 percent after contracting in January. 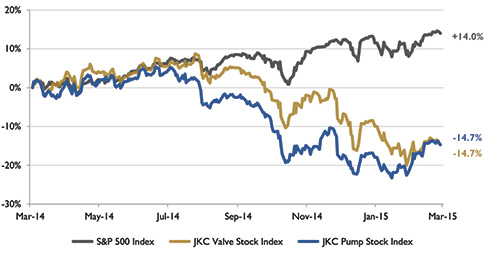 The Bureau of Labor Statistics reported that the unemployment rate fell to 5.5 percent in February, its lowest level since May 2008. Job growth remained positive with employers adding 295,000 jobs during the month. With a monthly average of 288,000 jobs added during the past three months, this was the 12th consecutive month with job growth of at least 200,000 workers. Manufacturing added 8,000 new workers during the month, less than the monthly average of 17,400 since the end of 2013. 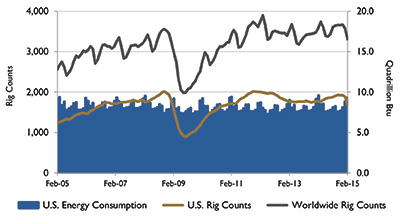 For the first time since June of last year, North Sea Brent crude oil monthly average spot prices increased by $10 per barrel to reach an average of $58 per barrel in February. A reduction in capital expenditures by major oil companies and a decrease in U.S. rig counts helped push up oil prices. The number of drilling rigs in use in the U.S. fell to 1,348 in February, down 335 from the 1,683 in use in January 2015 and down 421 from the 1,769 counted in February 2014.

Exports of U.S. noncrude petroleum products increased for the 13th consecutive year because of increased global demand and record high U.S. refinery production. Exports increased in every region of the world except the Middle East, but most products were sent to markets in Central and South America, according to the U.S. Energy Information Administration. Gasoline, propane and butane shipments increased, while distillate exports decreased as a result of declines in demand from Western Europe and Africa. Propane exports to Asia, mostly China and Japan, increased by 95 percent in 2014 compared with 2013. 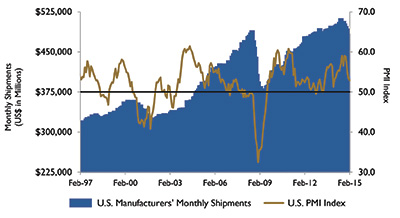 On Wall Street, the indices had their largest monthly gains in more than two years in February. The Dow Jones Industrial Average increased 5.6 percent, the S&P 500 Index was up 5.5 percent, and the NASDAQ Composite was up 7.1 percent. Investors were influenced by stabilizing oil prices, an agreement on Greece’s debt issues and strong earnings results by technology and retail companies. Merger news between Staples Inc. and Office Depot Inc., as well as between Pfizer Inc. and Hospira Inc., also had a positive impact on the markets.