The Jordan, Knauff & Company (JKC) Valve Stock Index was down 5.9 percent over the last 12 months, while the broader S&P 500 Index was up 3.9 percent. The JKC Pump Stock Index fell 11.6 percent for the same time period.1

U.S. gross domestic product (GDP) grew at a 2.6 percent annual pace in the fourth quarter of 2018, a slowdown after expanding 3.4 percent in the third quarter and 4.2 percent in the second quarter. Consumer spending increased 2.8 percent in the fourth quarter. Business investment was stronger than expected, with companies investing in equipment and intellectual property offsetting declines in spending on structures such as drilling rigs. For the full year, GDP was 2.9 percent, matching 2015 as the biggest increase since the 2007-2009 recession.

A group of the world’s largest publicly traded oil and natural gas producers added more hydrocarbons to their resource base in 2017 than in any year since 2013, according to the U.S. Energy Information Administration. These companies added a total of 277 billion barrels of oil equivalent (BOE) at the end of the year. Exploration and development (E&D) spending in 2017 increased 11 percent from 2016 levels but remained 47 percent lower than 2013 levels. 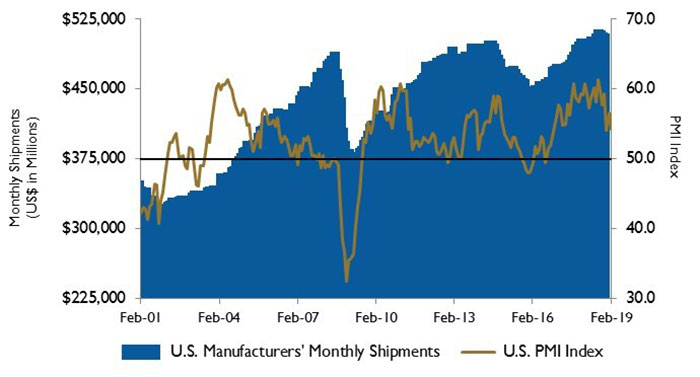 Organic additions to proved reserves, or reserves added through improved recovery and extensions and discoveries, are linked directly with capital expenditures in E&D. Of the 17.7 billion BOE in organic proved reserves added in 2017, less than half were in the U.S., while Russia, Central Asia and the Asia-Pacific region accounted for 24 percent. First quarter 2018 capital expenditures for these companies were 16 percent higher than in first quarter 2017. 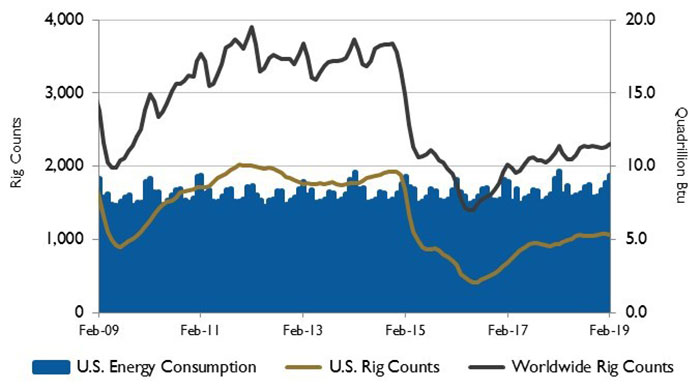 All three major stock indexes—The Dow Jones Industrial Average, the S&P 500 Index and the NASDAQ Composite—gained 3.7 percent, 3.0 percent and 3.4 percent, respectively. Year to date, the indexes are up 11.1 percent, 11.1 percent and 13.5 percent, respectively. The Federal Reserve Bank’s decision to put its aggressive interest rate policy on hold, the rebound of the energy and technology sectors and several positive developments on the trade war with China all had positive impacts on stocks.