The Jordan, Knauff & Company (JKC) Valve Stock Index was down 2.5 percent over the last 12 months, while the broader S&P 500 Index was up 7.9 percent. The JKC Pump Stock Index rose 2.3 percent for the same time period.1

The Institute for Supply Management’s purchasing managers’ index (PMI) registered 51.7 percent in June, a decrease of 0.4 percentage points from the May reading of 52.1 percent. June was the third straight month with slowing PMI expansion. New orders hit a 3.5-year low, at 50 percent, a decrease of 2.7 percentage points from May. Production improved over the month, with the index up nearly three points to 54.1 percent. The employment index also edged higher for a second straight month. At 54.5 percent, it represents only modest additions to factory jobs. Respondents expressed concern about United States and China trade issues, potential Mexico trade actions and the global economy.

According to the Bureau of Labor Statistics, the U.S. economy added 224,000 nonfarm payrolls during June. May’s figures were revised to 72,000 positions, down from the previously reported 75,000. Employment growth has averaged 172,000 jobs per month this year. The transportation and warehousing sector gained 24,000 jobs, while manufacturing added 17,000 positions.

U.S. imports of crude oil from members of the Organization of the Petroleum Exporting Countries (OPEC) in March 2019 totaled 1.5 million barrels per day, their lowest level since March 1986. From the early 1980s through the late 2000s, OPEC member countries were the source of about half of all U.S. crude oil imports. In the past decade, however, total U.S. crude oil imports have fallen and OPEC’s share of those imports has decreased. Non-OPEC countries such as Canada, Mexico, Brazil and Colombia have made up larger shares of U.S. crude oil imports. In each of the past four years, Canada alone has supplied more crude oil to the U.S. than all OPEC members combined. 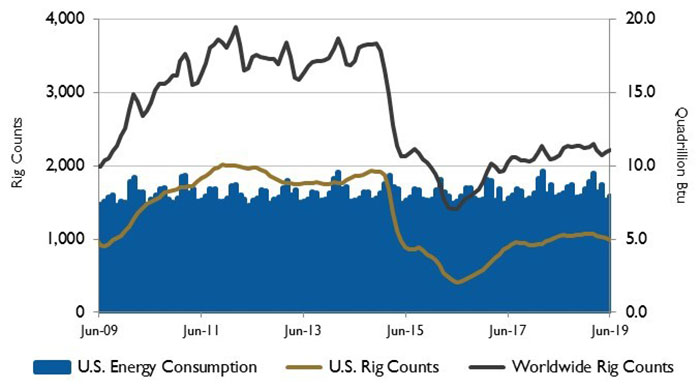 In the first three months of the year, the volume of U.S. crude oil imports from Saudi Arabia and Iraq—the two largest sources of imports from OPEC in 2018—have averaged 26 percent and 28 percent below their 2018 average levels. 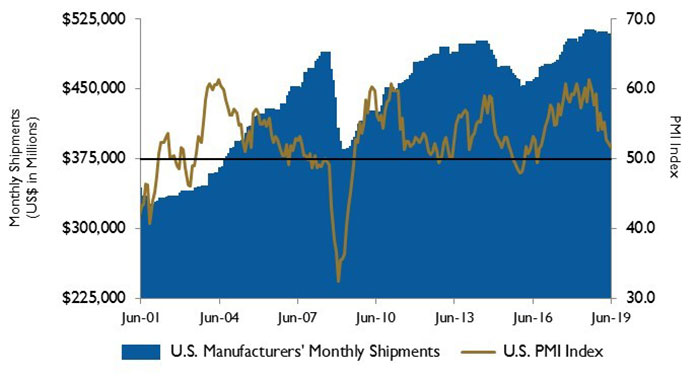 Reference 1. The S&P Return figures are provided by Capital IQ.

Pumps
Addressing Failure of High Energy Seawater Pump Impellers
Solutions to avoid cavitation and fatigue due to operational and design issues.
Pumps
Prevent the Risk of Heat Stress Injuries
How PPE can minimize the impact of dangerous working conditions.
Pumps
What Types of Pumps Are Typically Used for Fire Protection in Buildings?
The pump used will depend on the water source and the volume of flow required.
Pumps
Will We See Infrastructure Improvements Soon?
As of publication time, Biden’s infrastructure proposal remains under discussion with Congress.
Pumps
Drivers for Fire Pumps
Consideration must be given to ensure that electricity or enough fuel is available to operate these drivers in the case of fire.