The Institute for Supply Management’s Purchasing Managers’ Index (PMI) slowed from 59.8 percent in September to 57.7 percent in October, falling below both its six- and 12-month averages. The New Orders index had the largest fallback, declining 4.4 points to 57.4 percent.

This is the first time in a year and a half that new orders have been below 60 percent. The stronger dollar and slowdown in global trade may be affecting manufacturing, as the Export Orders index fell to 52.2 percent, the lowest since 2016.

The hiring increase was broad based; no single major industry lost jobs. Manufacturers added 32,000 jobs and construction added 32,000 new employees. The U.S. has added an average of 213,000 jobs a month through October. 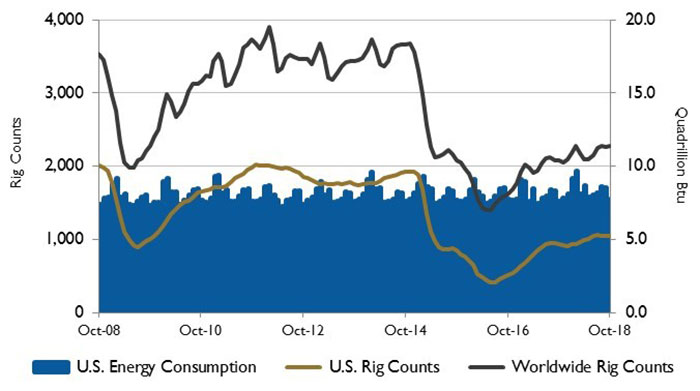 From 2003 to 2007, the value of U.S. energy imports was about 10 times greater than the value of exports. During the past decade, the trade gap for energy products narrowed, and by 2017 U.S. imports were only about 1.5 times greater than exports. Accounting for about two-thirds of the total value of energy imports, the main U.S. energy import is crude oil. Petroleum products, including liquefied petroleum gas, gasoline and diesel fuel, account for another 20 percent of imports. Although exports of crude oil have increased after the removal of crude export restrictions at the end of 2015, petroleum products still accounted for 70 percent of the total value of U.S. energy exports in 2017. 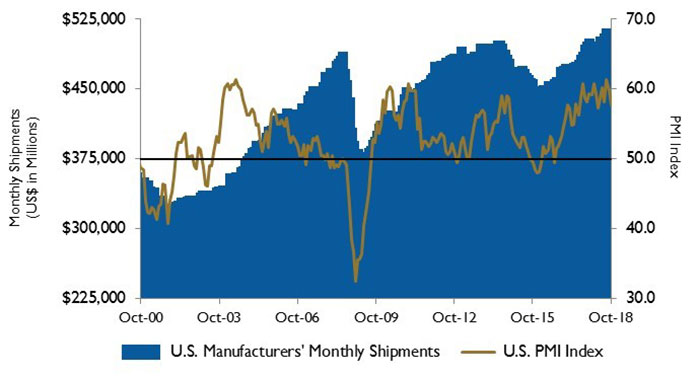 All three major stock indices were down in October. The Dow Jones Industrial Average lost 5.1 percent, the S&P 500 Index fell by 6.9 percent, while the NASDAQ Composite fell 9.2 percent, its largest monthly fall since November 2008. Investors were concerned about lingering trade conflicts with China, the aggressive monetary policy of the U.S. Federal Reserve Bank and rising yields on government bonds.