The Jordan, Knauff & Company (JKC) Valve Stock Index was up 20.1 percent over the last twelve months, while the broader S&P 500 Index was up 11.2 percent. The JKC Pump Stock Index increased 23.9 percent for the same period.1 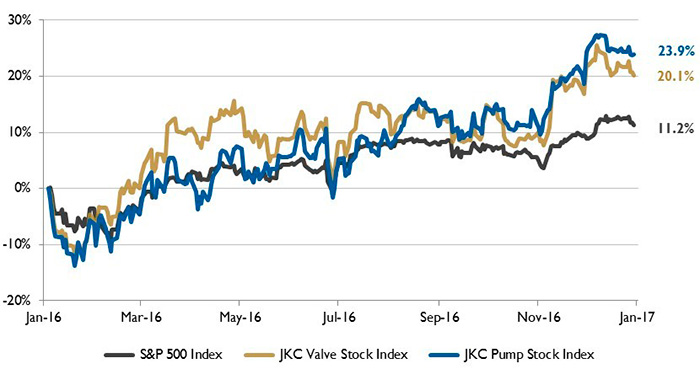 The Bureau of Labor Statistics reported that nonfarm employment increased by 156,000 jobs in December. Over the past year payroll growth averaged 180,000 jobs per month, below the average of 229,000 jobs per month seen in 2015. Although manufacturing employment rose by 17,000 jobs in December, manufacturing hiring was down by 45,000 workers for the entire year of 2016. The largest employment gains in December were in fabricated metal products with a gain of 5,800 jobs. Motor vehicles and parts, nonmetallic mineral products, furniture, plastics and rubber, primary metals and wood products all added more than 2,000 jobs each during the month.

Crude oil production in the United States declined in 2016 by more than 500,000 barrels per day over 2015, according to estimates from the U.S. Energy Information Administration. Despite the decline, production of crude oil is forecast to average 8.9 million barrels per day in 2016, the second highest level since 1985, and total crude oil exports were up for 2016. The number of countries receiving U.S. exports have risen since the restrictions on crude oil exports were lifted in December 2015. 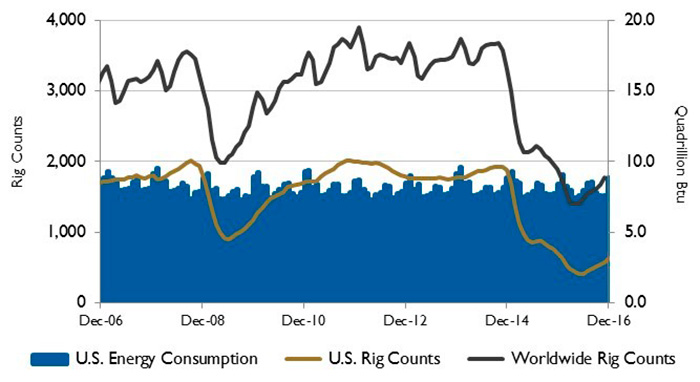 Relatively high production and inventory levels put downward pressure on crude oil prices throughout most of 2016, even with a strong demand for petroleum products. The annual average West Texas Intermediate oil price was $43 per barrel in 2016, down $5 per barrel from 2015. Recent agreements to curb production by OPEC and key non-OPEC producers put upward pressure on prices at the end of the year with West Texas Intermediate pricing ending 2016 at $53 per barrel, $16 per barrel higher than at the end of 2015. 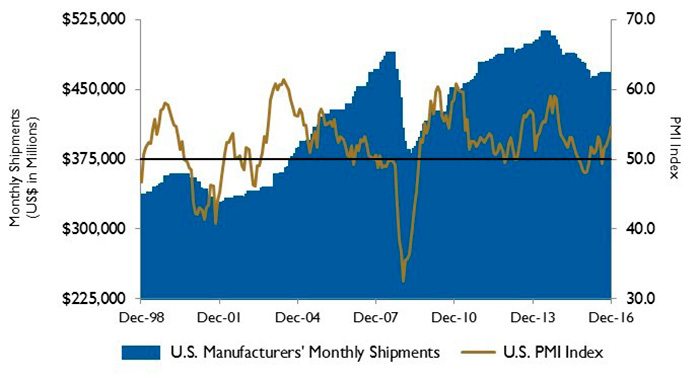 On Wall Street for the month of December, the Dow Jones Industrial Average, the S&P 500 Index and the NASDAQ Composite rose 3.3 percent, 1.8 percent and 1.1 percent, respectively. The markets were boosted by the upwardly revised expansion in the U.S. economy during the third quarter, strong manufacturing and services data, along with solid jobs and housing data. For the third quarter, all indices advanced with the Dow gaining 7.9 percent, the S&P 500 up 3.3 percent and the NASDAQ increasing 1.3 percent, also benefiting from OPEC’s decision to cut oil production for the first time since 2008.

Jordan, Knauff & Company is an investment bank based in Chicago, Illinois, that provides merger and acquisition advisory services to the
pump, valve and filtration industries. Please visit jordanknauff.com for further information. Jordan Knauff & Company is a member of FINRA.