After declines in three out of the four preceding months, United States. industrial production rose 1.1 percent in November led by the manufacturing component, which comprises three-quarters of all industrial activity. This was the largest monthly increase since February 2018. The gain comes after manufacturing was down in seven of the first 10 months of the year. The level of factory output is down 0.7 percent from a year ago.

The U.S. Energy Information Administration (EIA) expects U.S. crude oil production to average 13.2 million barrels per day (b/d) in 2020, an increase of 0.9 million b/d from the 2019 level. The expected growth is slower than the 2018 growth of 1.6 million b/d and 2019 growth of 1.3 million b/d. The slowing growth is the result of a decline in drilling rigs over the past year, which is expected to continue into 2020. 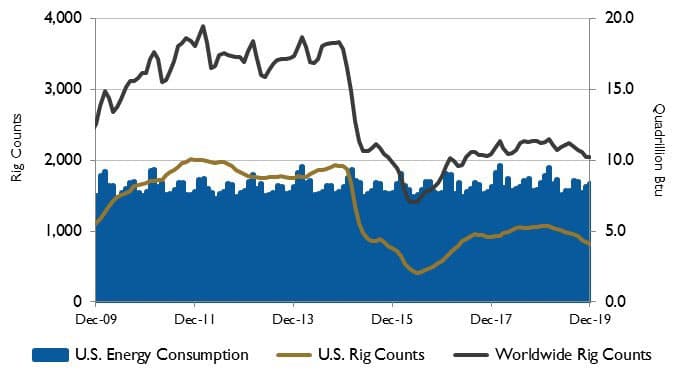 In December, the Organization of the Petroleum Exporting Countries (OPEC) and a group of other oil producers announced they were deepening production cuts. Amid a forecast of rising oil inventories, the EIA forecasts OPEC crude oil production will average 29.3 million b/d in 2020, down by 0.5 million b/d from 2019. 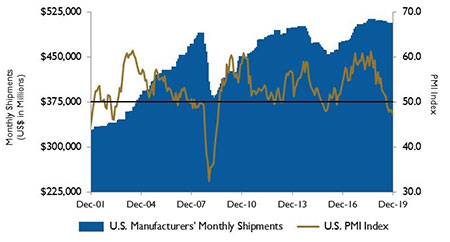 On Wall Street, despite a slump in the manufacturing sector and the lengthy trade war with China, the stock market soared in 2019. The Dow Jones Industrial Average, the S&P 500 Index and the NASDAQ Composite rose 22.3 percent, 28.9 percent and 35.2 percent, respectively for the year. The last three months of the year saw the easing of the China trade war and strong economic data boosting investors’ sentiments. During the month of December, the Dow rose 1.7 percent, the S&P 500 2.9 percent and the NASDAQ 3.6 percent with major indexes closing at new all-time highs.