The Jordan, Knauff & Company (JKC) Valve Stock Index was down 16.4 percent over the last twelve months, while the broader S&P 500 Index was up 9.5 percent. The JKC Pump Stock Index also decreased 18.2 percent for the same time period.1

The Institute for Supply Management's Purchasing Managers' Index (PMI) rose to 52.8 percent for the month of May compared to 51.5 percent in April. Positive segments of the report included a 2.3 percent rise in new orders, a 3.4 percent increase in employment and a 4.0 percent increase in order backlogs. The Prices Index registered 49.5 percent indicating lower raw materials prices for the seventh consecutive month. The survey highlighted continuing concerns over the price of the U.S. dollar and challenges affecting manufacturing related to the oil and gas industry. 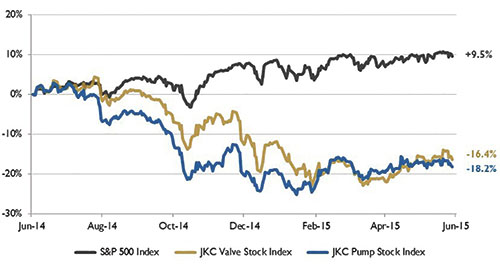 For the second year in a row, the Bureau of Economic Analysis reported that gross domestic product (GDP) contracted in the first quarter of the year. A strong dollar, harsh winter weather in the Northeast and Midwest, slow growth abroad, lower crude oil prices and a labor dispute at the West Coast ports all contributed to the 0.7 percent contraction this year. The export of goods fell 14.0 percent, while imports increased 5.1 percent. Consumer and business spending was also soft, as consumer spending was up only 0.5 percent during the period. Canada, one of our largest trading partners, reported a 0.6 percent contraction in their economy for the first quarter. 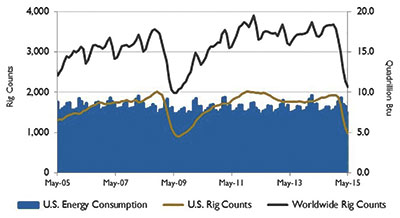 In contrast, as the effects of the West Coast port slowdown faded, the U.S. trade deficit fell by 19 percent in April, the sharpest drop in more than six years. Nominal imports dropped 3.3 percent while exports increased by one percent. Through the first four months of the year, exports were down 2.3 percent while imports were down 1.8 percent. The export of services was the highest on record in April and the trade deficit for petroleum products was at its lowest level since early 2002. 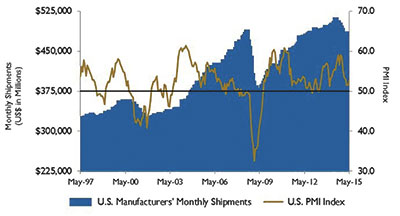 U.S. oil production rose from 5.6 million barrels per day in 2011 to 8.7 million barrel per day in 2014. According to the U.S. Energy Information Administration, almost 90 percent of this growth consisted of light crude oil. More than half of this additional U.S. production has been absorbed by reducing oil imports of similar grades. For example, almost 56 percent of the total decline in crude oil imports between 2001 and 2014 was light crude. Since 2010, imports of heavy crudes have remained the same. This production has also resulted in additional crude exports to Canada and increased U.S. refinery runs.

On Wall Street all indices were up slightly for May. The Dow Jones Industrial Average gained 0.9 percent, the S&P 500 Index was up 1.1 percent and the NASDAQ Composite rose 2.6 percent, helped by biotech stock gains. Economic data was mixed for the month, resulting in no clear timing on the Federal Reserve interest rate hike. Data on housing, consumer confidence and new orders for manufactured durable goods were encouraging, while industrial production and the producer price index declined.
Reference
1. The S&P Return figures are provided by Capital IQ.

Jordan, Knauff & Company is an investment bank based in Chicago, Illinois, that provides merger and acquisition advisory services to the pump, valve and filtration industries. Please visit jordanknauff.com for more information. Jordan Knauff & Company is a member of FINRA.