The Institute for Supply Management’s Purchasing Managers’ Index (PMI) increased from 57.3 percent in April to 58.7 percent in May. The New Orders Index registered 63.7 percent, an increase of 2.5 percentage points from the April reading. The Production Index registered 61.5 percent, a 4.3 percentage point increase. Demand remains strong, with the New Orders Index at 60 or above for the 13th straight month, and the Customers’ Inventories Index remaining at very low levels. 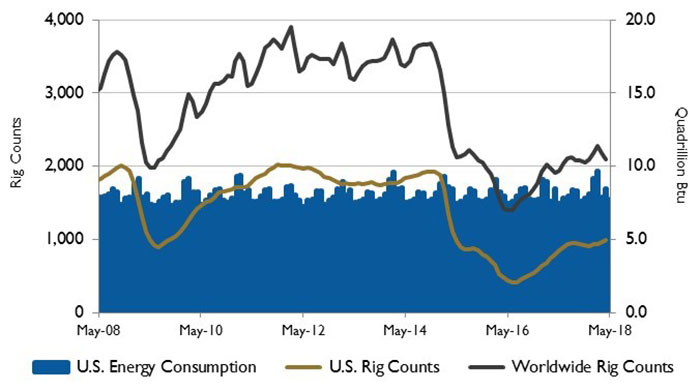 As a result of the November 2016 Organization of Petroleum Exporting Countries (OPEC) and Russian agreement to reduce crude oil production, global petroleum inventories declined through 2017 and the first quarter of 2018, ending an extended period of oversupply in the market. Both U.S. and Organization for Economic Cooperation and Development (OECD) member countries’ total liquid fuel inventories have returned to their five-year averages after above average levels since the end of 2014. 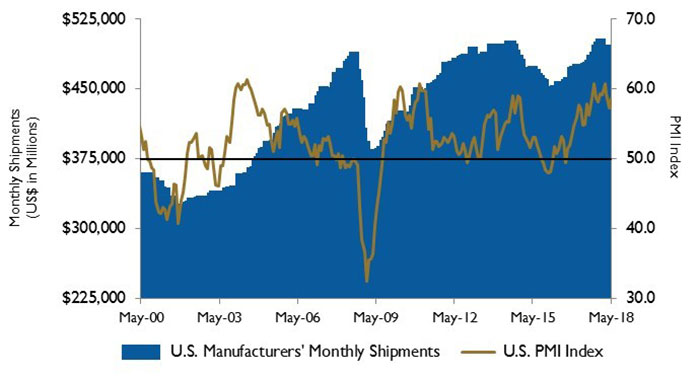 On Wall Street for May, the Dow Jones Industrial Average gained 1.1 percent, the S&P 500 Index increased by 2.2 percent, while the NASDAQ Composite grew 5.3 percent. First quarter corporate earnings for S&P 500 members were up 24.3 percent compared to May 2017, the largest quarterly earnings growth in seven years. The market saw volatility due to U.S. trade conflicts with China, Canada, Mexico and the European Union.