The Institute for Supply Management’s Purchasing Managers’ Index (PMI) declined 5.2 percentage points in January to 51.3 percent from December’s 56.5 percent. All the components of the index were down from the previous month with the New Orders Index falling 13.2 percent. Despite the overall numbers, 11 of the 18 industries surveyed reported growth during the month.

The Commerce Department reported that the U.S. gross domestic product for the fourth quarter of 2013 grew at a 3.2-percent annual rate. With a third-quarter reading of 4.1 percent, the last six months of 2013 showed the strongest second half since 2003. Fourth-quarter growth was driven by stronger consumer spending, up 3.3 percent, and rising exports. Company investments increased at a 3.8-percent annual rate, with spending on equipment growing at a 6.9-percent rate. The public sector weighed down economic output in the quarter with overall government spending falling at a 4.9-percent pace and federal spending falling 12.6 percent.

Rising crude oil production in the U.S. contributed to relatively stable global crude oil prices in 2013. West Texas Intermediate (WTI) spot prices averaged $98 per barrel in 2013, the highest annual average since 2008, up 4 percent from 2012. Transportation constraints that put downward pressure on WTI prices were alleviated by new pipeline and railroad infrastructure improvements. Growing more than the combined increases of the rest of the world and reaching its highest level in 24 years, U.S. crude oil production increased 1 million barrels per day last year. China surpassed the U.S. as the world’s largest importer of crude oil in 2013 and accounted for almost one third of the growth in global crude oil demand. 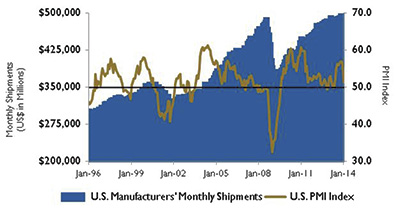 On Wall Street, the Dow Jones Industrial Average declined 5.3 percent in January. The S&P 500 Index dropped 3.6 percent, and the NASDAQ Composite Index fell 1.7 percent. The markets were affected by turbulence in emerging markets as investors reevaluated the risk associated with them. Concern about global economic growth as the Chinese economy shows signs of slowing more than expected was also a factor. The longer term outlook for U.S. stocks is more upbeat with the latest corporate earnings reports showing growth to be stronger than expected.