The Jordan, Knauff & Company (JKC) Valve Stock Index was down 15.2 percent over the last 12 months, while the broader S&P 500 Index was up 14.5 percent. The JKC Pump Stock Index decreased 12.1 percent for the same time period.1

The Institute for Supply Management's Purchasing Managers' Index (PMI) decreased 1.6 percentage points in January to 53.5 percent, even as comments from the survey indicated that most industries are experiencing strong demand. The New Orders Index registered 52.9 percent, down 4.9 percentage points compared with December, while growth was reported in 10 industries. The Export Index fell below 50 percent, indicating contraction and highlighting concerns about global growth.

Declining for the fifth straight month, the Census Bureau reported that new factory orders fell 3.4 percent in December. Both durable and nondurable goods were down. The transportation equipment sector fell 9.1 percent because of a decline in aircraft spending. Other declining sectors included machinery, primary metals, and computers and electronics. Sectors showing growth included furniture, fabricated metal and electronic equipment. Manufactured goods orders averaged $498.8 billion per month in 2014, 2.8 percent higher than the monthly average in 2013. 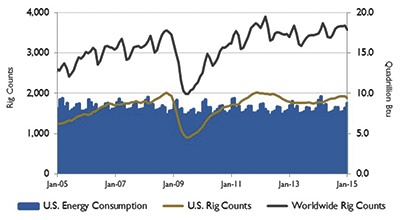 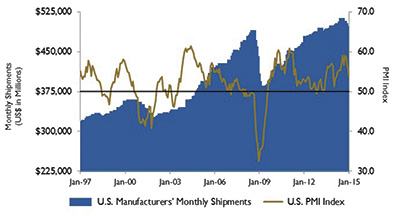 U.S. gross domestic product (GDP) grew at an annual rate of 2.6 percent in the fourth quarter of last year according to the first estimate by the Commerce Department. Lower gasoline and energy prices have increased household purchasing power as consumer spending increased 4.3 percent during the quarter. Spending on durable goods increased 7.4 percent because of healthy motor vehicle sales, and nondurable goods spending rose 4.4 percent. In 2014, GDP increased 2.4 percent, the strongest annual rate in four years and up from 2.2 percent in 2013.

According to the Energy Information Administration (EIA), U.S. commercial crude oil inventories (excluding the Strategic Petroleum Reserve) were 413.1 million barrels at the end of January. This is 15 percent higher than at the same time last year and is the highest level for this time of year in the last 80 years. Driven by supply from non-Organization of Petroleum Exporting Countries sources, the EIA estimates that global oil inventories increased by almost 0.8 million barrels per day last year and will continue to grow by 0.9 million barrels per day during the first half of 2015, keeping downward pressure on oil prices. Inventory growth is expected to taper off by the end of the year as lower oil prices cause supply growth to weaken, especially in the U.S.

On Wall Street, the Dow Jones Industrial Average fell 3.7 percent, the S&P 500 Index dropped 3.1 percent, and the NASDAQ Composite lost 2.1 percent for the month of January.

Reference
1. The S&P Return figures are provided by Capital IQ.
These materials were prepared for informational purposes from sources that are believed to be reliable but which could change without notice. Jordan, Knauff & Company and Pumps & Systems shall not in any way be liable for claims relating to these materials and makes no warranties, express or implied, or representations as to their accuracy or completeness or for errors or omissions contained herein. This information is not intended to be construed as tax, legal or investment advice. These materials do not constitute an offer to buy or sell any financial security or participate in any investment offering or deployment of capital.