The Jordan, Knauff & Company (JKC) Valve Stock Index was up 1.9 percent over the last 12 months, while the broader S&P 500 Index was up 19.1 percent. The JKC Pump Stock Index rose 7.8 percent for the same time period.1

The Employment Index registered 46.6 percent, a 1.4 percentage point increase from the prior month. Despite the signing of a Phase I trade deal with China, survey respondents in multiple industries remain worried about tariffs. According to one respondent, “Tariffs are still a concern and are believed to be a factor in short supply and higher prices of electronic parts.” 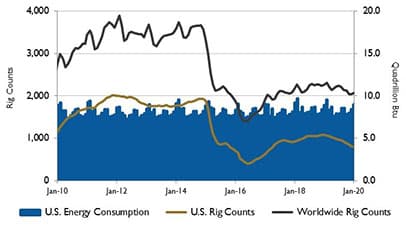 This slow growth in U.S. energy consumption, along with technologically enabled growth in domestic oil and natural gas production, will lead the U.S. to remain a net energy exporter through 2050. The U.S. will continue to export more petroleum and other liquids than it imports, with a peak at more than 3.8 million barrels per day (bpd) in the early 2030s before gradually declining to 0.2 million bpd in 2050 as domestic consumption slowly rises. 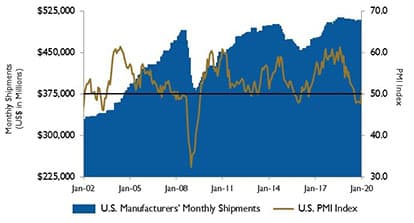 On Wall Street, the Dow Jones Industrial Average and the S&P 500 Index fell 1 percent and 0.2 percent, respectively, while the NASDAQ Composite rose 2 percent for the month of January.

The signing of the U.S./China Phase I trade deal lifted markets in the first half of the month, while the second half was affected by volatility due to the outbreak of the coronavirus.

1 - The S&P Return figures are provided by Capital IQ.