According to the U.S. Energy Information Administration (EIA), total U.S. crude oil production grew 15 percent last year to 7.4 million barrels per day. Texas and North Dakota led the growth. Since 2010, North Dakota’s crude oil output has increased 177 percent, and Texas’s has increased by 119 percent. Five states and the Gulf of Mexico supplied more than 80 percent of production in 2013. Texas provided almost 35 percent. The offshore Gulf of Mexico produced 17 percent, followed by North Dakota at 12 percent, California and Alaska at almost 7 percent each and Oklahoma at 4 percent. 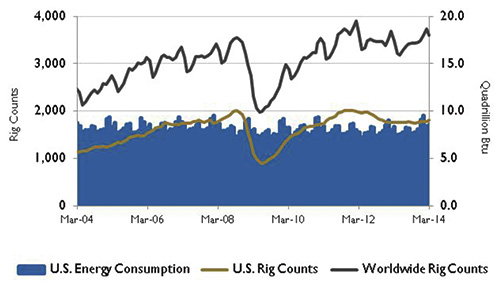 On Wall Street, the Dow Jones Industrial Average was up 0.8 percent in March. The S&P 500 Index rose 0.7 percent while the NASDAQ Composite Index decreased 2.5 percent, its worst monthly performance since October 2012. During the first quarter 2014, the S&P 500 and the NASDAQ Composite gained 1.3 percent and 0.5 percent, respectively. However, the Dow Jones Industrial Average was down 0.7 percent.