Although the Institute for Supply Management’s Purchasing Managers’ Index (PMI) decreased 2.4 percent in September to a reading of 56.6 percent, the survey shows continued expansion in the U.S. manufacturing sector and indicates continued overall economic growth. The Production Index was slightly stronger than August at 64.6 percent. New orders slowed to 60 percent from 66.7 percent, but the index has remained in expansion mode for 16 straight months. New orders increased in 12 of 14 industries with growth in chemicals, transportation equipment, paper and fabricated metals.

The Bureau of Labor Statistics reported that the nation’s unemployment rate fell below 6 percent for the first time since 2008. Employers added 248,000 jobs in September, and the unemployment rate declined to 5.9 percent. Job growth was strong in professional and business services, especially in employment services and consulting. The health care and retail sectors also grew, while construction added 16,000 jobs. Last September, the unemployment rate stood at 7.2 percent. Since then, employers have added 2.6 million jobs. 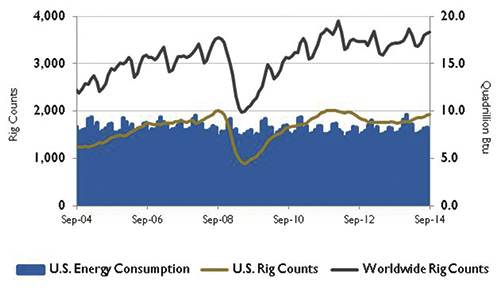 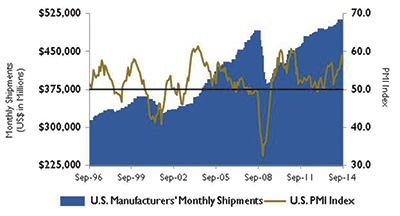 On Wall Street, the Dow Jones Industrial Average declined 0.3 percent. The S&P 500 Index lost 1.6 percent, and the NASDAQ Composite fell 1.9 percent for the month of September. Sluggish growth in the eurozone, China’s weaker economic data and geopolitical tensions dampened investor sentiment. However, all three indices showed small gains for the third quarter of the year because of encouraging housing sector data in August and positive factory orders. The S&P 500 and the NASDAQ both recorded gains for the seventh quarter in a row.