The Jordan, Knauff & Company (JKC) Valve Stock Index was up 19.0 percent over the last 12 months, while the broader S&P 500 Index was up 15.2 percent. The JKC Pump Stock Index fell 0.8 percent for the same time period.1

The Institute for Supply Management’s Purchasing Managers’ Index (PMI) slowed from 61.3 percent in August to 59.8 percent in September. The new orders index and backlog of orders index both fell during the month and are now below their six month averages. The prices paid index fell 5.2 percentage points to 66.9 percent, the first time it has been below 70 percent this year. Survey respondents are again concerned about tariff-related activity, with a chemical products manufacturer stating that tariffs are starting to take a bite out of profitability.

The U.S. economy added 134,000 jobs in September. Hurricane Florence likely impacted this number as about 300,000 workers were unable to work. Job gains were seen in manufacturing, construction and mining. Retail and leisure and hospitality lost jobs. The unemployment rate fell to 3.7 percent. Payroll growth was revised upward by 87,000 jobs for July and August. 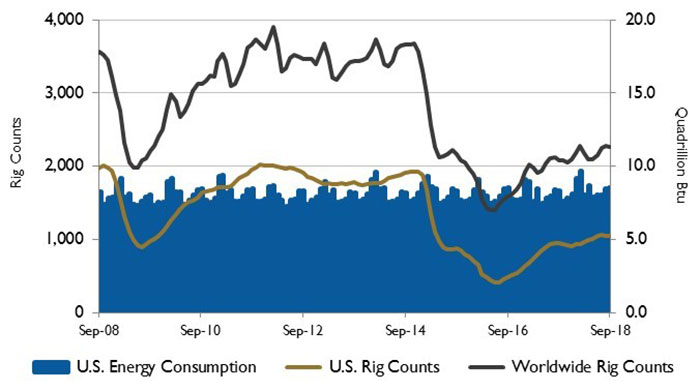 U.S. crude oil exports increased by almost 80 percent from the first half of 2017 to the first half of 2018 and set a new monthly record of 2.2 million barrels per day in June. Crude oil has now surpassed hydrocarbon gas liquids to become the largest U.S. petroleum export. China, South Korea and India were the largest markets. Europe was the second-largest market for U.S. crude oil exports. 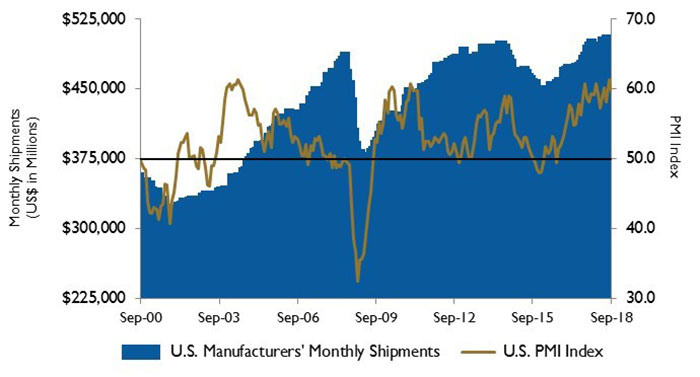 On Wall Street for September, the Dow Jones Industrial Average gained 1.9 percent and the S&P 500 Index increased by 0.4 percent, while the NASDAQ Composite fell 0.8 percent. Strong economic data including consumer confidence, industrial production, consumer spending and durable goods orders significantly boosted the market. While investors were concerned by the lingering trade conflict between the U.S. and China, the Trump Administration imposed $200 billion of new tariffs on China and threatened to impose another $267 billion if China retaliates. China responded with $60 billion in retaliatory tariffs.