The Jordan, Knauff & Company (JKC) Valve Stock Index was down 14.9 percent over the last 12 months, while the broader S&P 500 Index was up 1.8 percent. The JKC Pump Stock Index fell 12.3 percent for the same time.1

The Institute for Supply Management’s Purchasing Managers’ Index (PMI) September reading registered 47.8 percent, a decrease of 1.3 percentage points from August. September was the second consecutive month of PMI contraction, and at 47.8 percent, the ISM manufacturing index is now at its lowest level this business cycle, including the 2015-2016 slowdown.

Global trade remains the most significant issue, as demonstrated by the contraction in new export orders that began in July. Of the 18 manufacturing industries surveyed, only three reported growth: miscellaneous manufacturing; food, beverage and tobacco products; and chemical products.

Although still below the neutral mark of 50 percent, the J.P. Morgan Global Manufacturing PMI rose for the second month to 49.7 percent. National PMI data signaled deteriorations in overall business conditions in 15 of the countries covered. Japan saw further contraction while the rate of decline in the Eurozone was the fastest in almost seven years, mainly due to a sharp deterioration in Germany’s performance. The trend in international trade flows also remained weak, as new export orders declined for the 13th consecutive month. The U.S., China, Germany and Japan were among the many nations to report a decrease in new export business. 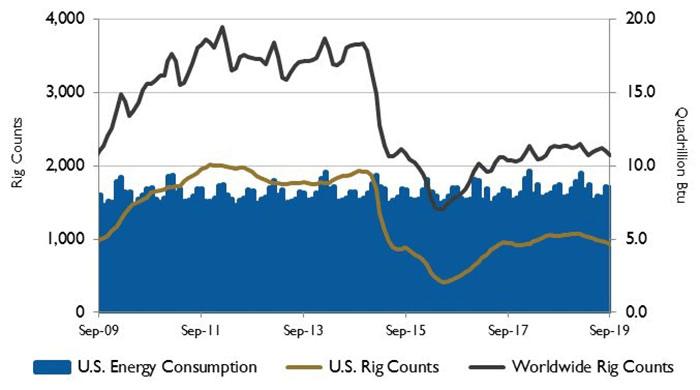 On Wall Street, the Dow Jones Industrial Average, the S&P 500 Index and the NASDAQ Composite gained 2.0 percent, 1.7 percent and 0.5 percent, respectively in September. The first half of the month was encouraged by a second interest rate cut by the Federal Reserve Bank. However, volatility erupted in the second half due to trade tensions and possible impeachment proceedings of the U.S. president. 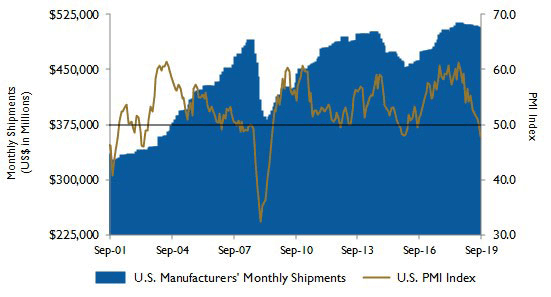 For the third quarter, the Dow Jones Industrial Average and the S&P 500 Index gained 1.2 percent each while the NASDAQ Composite was down 0.1 percent.