After a modest increase in July, the Consumer Confidence Index jumped 5.5 points in August to 133.4, with gains in both present and future expectations. Optimism reflects the tightening labor market, as the share of consumers stating jobs as plentiful was unchanged, and those who see jobs as hard to get fell 2.1 points, pushing the labor differential up to its highest level since 2001. Consumers expect their incomes to rise over the next six months. 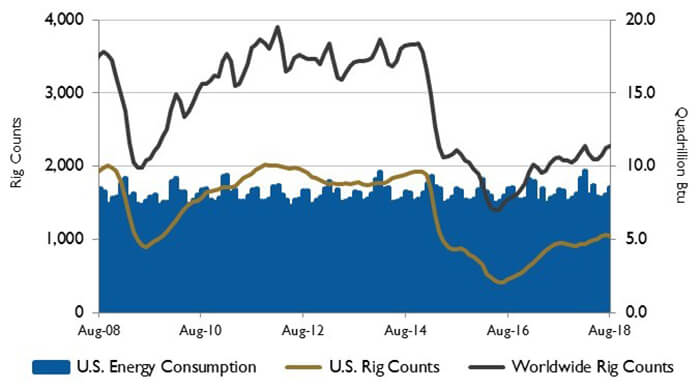 The Gulf of Mexico has accounted for an increasingly smaller portion of national production, which is a significant change from a decade ago. The Gulf’s share in 2007 was 12 percent and has fallen to just 3 percent in recent months.

Following the expansions of cross-border pipeline capacity, U.S. natural gas pipeline exports to Mexico have been increasing, averaging 4.2 billion cubic feet per day in 2017 and increasing to 4.4 billion cubic feet per day through the first five months of 2018. An additional four of six major pipelines in Mexico’s infrastructure expansion plans are scheduled to begin operations and will transport U.S. natural gas farther into Mexico’s central and southern regions. These pipelines will provide an additional outlet for Permian Basin production in western Texas. 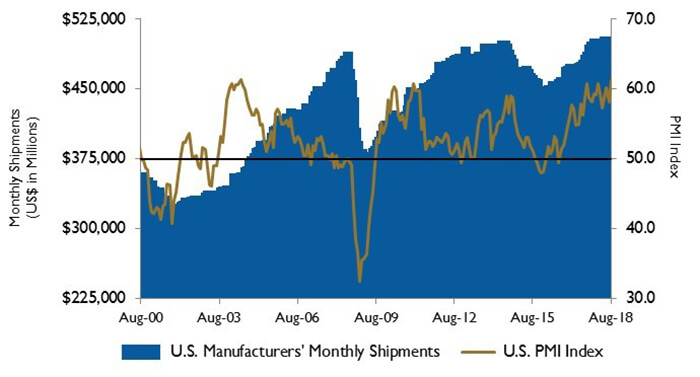 On Wall Street for the month of August, the Dow Jones Industrial Average gained 2.2 percent and the S&P 500 Index increased by 3.0 percent, while the NASDAQ Composite grew 5.7 percent, its highest monthly gain since January.