The Jordan Knauff & Company (JKC) Valve Stock Index was down 5.2 percent over the last 12 months, while the broader S&P 500 Index was up 20.4 percent. The JKC Pump Stock Index rose 5.4 percent for the same time period.1

The Institute for Supply Management’s Purchasing Managers’ Index (PMI) jumped to 56 percent in August, marking the highest reading in the index since late 2018. The current production index climbed to 63.3 percent, while new orders rose to a 17-year high of 67.6 percent. The employment index, at 46.4 percent, is consistent with manufacturers continuing to lay off workers. The need to pare back employment shows that overall demand remains weak. Areas like durable goods spending have recovered, especially related to housing. A survey respondent from the wood products industry said, “Homebuilder business continues to be robust…and will only be held back by supply issues across the entire industry.” Yet manufacturers tied to services hit hard by the pandemic continue to struggle. 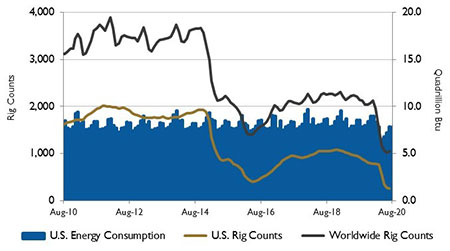 Between January and early July 2020, approximately 5 billion cubic feet per day (Bcf/d) of new pipeline capacity entered service in the U.S., according to the U.S. Energy Information Administration. Several of these projects could increase deliverability to growing natural gas demand markets in North America. An estimated 8.7 Bcf/d of pipeline projects have been canceled in 2020.

On Wall Street, the markets rallied for the fifth consecutive month in August. The Dow Jones Industrial Average, the S&P 500 Index and the NASDAQ Composite surged 7.6 percent, 7.0 percent and 9.6 percent, respectively. This was the best August for the Dow since 1984 and for the S&P 500 since 1986. Solid economic data, better-than-expected second quarter gross domestic product and corporate earnings, the Federal Reserve’s newly adopted ultra-accommodative average inflation targeting policy, and expectations for a fresh round of fiscal stimulus boosted investors’ confidence. 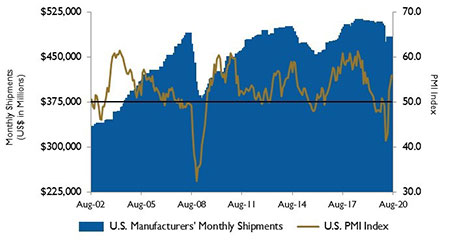 Reference
1. The S&P Return figures are provided by Capital IQ

Pumps
Data Science as a Way to Extract Value From the Industrial Internet
Analytics can help organizations become more efficient.
Pumps
8 Tips States Can Borrow From Northern Neighbors for Future Storms
Many mitigation measures implemented are simple, practical and inexpensive.
Pumps
Select the Best Technology for Dewatered Cake Transfer
Understand the differences between pumps and conveyors, plus progressive cavity and piston pumps.
Pumps
What Types of Pumps Are Used in Aeration Basins?
There will be some stringy materials and grit but in the headworks portion of the plant.
Pumps
Wastewater Pump Station Rehabbed With Flexible Technology
The overhaul resulted in increased energy efficiencies and reduced sewer overflows for a Tennessee city.

PdMA Corporation
Dangers of Cavitation in Piping Systems & How to Avoid It
Understand more about this condition and why its causes are difficult to identify.