What To Know About Wire-to-Water Efficiency

Tips for identifying pumps to be tested and evaluating KPIs.
by Eric Dole
Hazen and Sawyer
11/20/2018

The term wire-to-water efficiency has been used in the pumping industry for years, but what does it really mean? Simply put, it is a way to determine how efficiently an electromechanical system uses electricity to perform work, such as pumping. In hydraulic terms, it is the ratio of water horsepower (hp) output to true horsepower, or kilowatt, input to the motor.

Wire-to-water efficiency considers the efficiency of the pump, motor and variable frequency drive (VFD), if applicable, at a series of operating points that simulate historical conditions, so a baseline efficiency, or energy intensity in kilowatt-hour per million gallons (kWh/mg), can be established. The kWh/mg can then be compared to the other pumps in the system to determine which have the highest potential for energy savings and optimization.

Not only do users want feedback about inefficient pumps, they also want to know what may be causing the inefficiency, even if it is a high-level overview of items that should be addressed. These suggestions are called energy efficiency measures (EEMs). See Image 1 for a depiction of inefficient pumping causes and symptoms and potential EEMs. 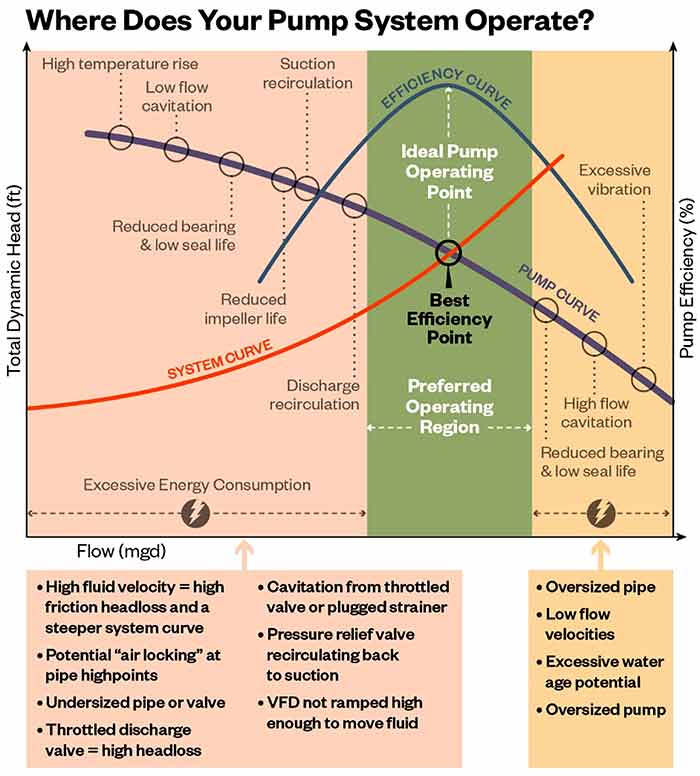 Wire-to-Water Testing: The How & Why

First, identify which pumps to test. Users often ask, “How do I know which pumps to invest in for wire-to-water testing?” It is recommended that a high level energy intensity evaluation be performed prior to the field testing, so a shortlist can be ranked from highest kWh/mg to lowest.

This evaluation involves taking the monthly consumed kWh (from the electric bill) and dividing by the total flow in million gallons pumped during the same billing cycle. If there is no flow metering at the pump station, a properly specified portable flow meter should be installed on the pump(s) so totalized flow data can be correlated to power consumption.

Often the pump(s) being tested are served by the same billing meter as other electrical loads (for example, water and wastewater process equipment at treatment plants). In these situations, submetering is not typically available to trend the power consumption, so installing temporary power quality monitors (PQMs) on pump motor control centers (MCCs) is a good idea. Pumps that have a history of excessive maintenance, significant historical runtime, and/ or are greater than 40 hp tend to be good candidates for submetering with the PQMs so the kWh can be trended.

More rudimentary techniques can help determine a rough estimate of percent contribution of power consumption for those situations that do not have submetering. One technique is developing a nameplate motor hp ratio of the pump(s) being analyzed compared to the total connected hp at the facility; but, a historical runtime is still required. Once the shortlisted pump systems are identified, a scoping visit typically follows. During the scoping visit, a feasibility evaluation of the wire-to-water testing opportunity should be performed. This evaluation should:

Similar to a hydraulic modeling, wire-to-water efficiency testing follows the GIGO concept (garbage in equals garbage out). Extra effort should be spent ensuring the data used to build the evaluation is as accurate as possible.

Remember, the main goal of wire-to-water testing is to determine how efficient your pump system is at using electricity in performing a mechanical task. This is done by dividing the water hp output by the electric hp input. This ratio will not only reveal the efficiency of the pump as a percentage, but also many other metrics can be derived from this test such as kilowatt per million gallons per day (kW/ mgd) and kWh/mg.

Determining the wire-to-water efficiency establishes the baseline energy intensity so the increase in efficiency can be determined once the EEM is implemented. The result of the increase in efficiency for a specific flow and TDH recorded during the test is a reduction in horsepower. Sometimes EEMs—such as identifying a throttled valve, plugged suction strainer or air-locked pipe—result in flatter system curves that require less TDH to attain the same flow. Selecting a new pump that intersects the flatter system curve at the best efficiency point (BEP) will result in additional power savings as shown in Image 1. 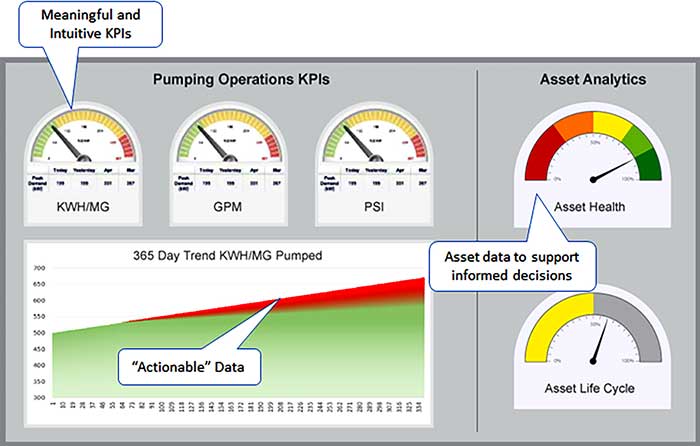 The same applies while verifying a pump curve, with the only variation being that the TDH is measured immediately upstream of the throttled valve. When building field system curves, collect data for at least three points near shutoff, in the middle range and at the far end of the pump curve, with and without other pumps in the station operating.

It is essential to leave the owner more educated about their pumping systems than they were beforehand. The tester should do their homework to ensure an accurate scope and fee can be developed. Prioritizing pumps to be tested based on historical energy intensity is next, avoiding testing already efficient pumps. This task can be performed by the user to save costs. Once inefficient pumps are shortlisted, perform comprehensive wire-to-water efficiency tests to determine an accurate baseline energy intensity and provide the information required to develop EEMs. Identify high-impact EEMs to increase energy savings and reduce the payback period of the upgrade. When simple, noninvasive EEMs can be implemented and provide a return on investment in less than two to three years.

Lastly, wire-to-water efficiency testing makes the invisible visible. Field testing gives the user a snapshot in time, whereas the use of permanent wire-to-water efficiency trending and energy dashboarding reveal opportunities to continually monitor the pump system efficiency, determine operational issues and optimize control strategies. See Image 2 for an example of a pump energy dashboard that trends various key performance indicators (KPI). An important benefit of dashboarding KPIs is they can be used to guide informed operational decisions for improved efficiency.

Method #1 Evaluate as many pumps as possible that have excessive energy intensities compared to other pumps in the system so a high-level list of EEMs can be developed and prioritized in a capital improvement program (CIP). The EEMs can be prioritized based on budgetary cost estimates and severity of inefficiency. Method #2 Same as Method #1 but use historical flows and energy intensities to develop an accurate baseline power consumption so an accurate energy savings potential can be estimated. This will allow a higher level of confidence of energy/operational savings that can offset implementation costs and ultimately raise the ROI of the EEM. This method is typically narrowed to a smaller group of pumps being tested so a more focused 30 percent design deliverable EEM can be provided to the client. At minimum, this deliverable should include sufficient detail for a contractor or facility staff to provide a more accurate estimate to install the EEM. This deliverable typically consists of a process flow diagram that calls out the major equipment, pipe and instrumentation details, along with detailed specifications of the EEM. Method #3 Same as Method #2 but use the local electric utility’s demand side management (DSM) rebate program to co-fund the evaluation. Some electric utilities will pay up to 75 percent of the wire-to-water testing efforts, up to $25,000 for eligible pumps.

Eric Dole, PE, PSAP, is an associate at Hazen and Sawyer. He is a certified Pump Systems Assessment Professional through the Hydraulic Institute and has performed more than 130 wire-to-water efficiency tests. He can be reached at edole@hazenandsawyer.com. For more information, visit www.hazenandsawyer.com.