What You Might Not Know About Bolts for Rotodynamic Pump Applications

Pump failure can arise from some of the least conspicuous or expensive parts of the pump—the bolts and washers. Pump manufacturers should consider the following six factors when choosing bolts for their rotating assemblies. 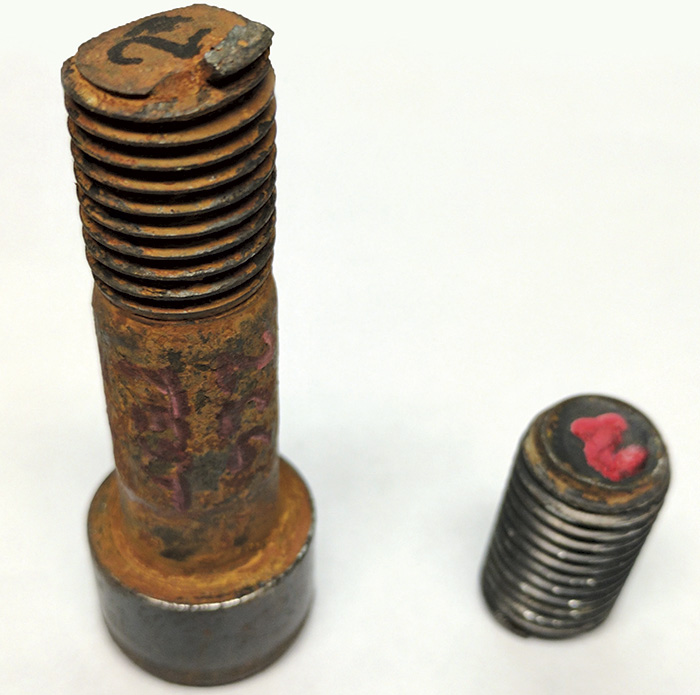 Rotary lobe pumps often operate at slower speeds, under 1,000 rpm, and higher viscosities compared to other pump designs such as centrifugal pumps, which are regularly run at 3,600 rpm. They often pump water and other low viscosity materials.

A bolt design that works perfectly in one pump style may fail quickly in another. Pump speed has a drastic impact on the rotodynamic bolt in pumps. The pump’s typical speed range needs to be considered when designing the bolt assembly. Low speeds will place a large amount of torque on the rotating assembly, while high speeds can lead to greater vibration on the bolt. Excess vibration can lead to the failure of pump components, including the rotodynamic bolts. Vibration causes a radial force on the bolt head and shank that can cause the bolt to loosen and shear the bolt (see Image 1).

The process pressure range will also cause failure in a similar manner to speed. The value of the discharge and suction pressure on the pump can cause vibration and destroy a bolt if it is not taken into account. Suction lift can be harsh on rotodynamic bolts. In an application where a pump is expected to regularly see more than 20 feet of suction lift on water, the bolting assembly should be examined. Applications with high vacuum cause excess vibration and radial forces and have been shown to break bolts that succeed in other applications.

The chemicals and temperatures that a bolt encounters are some of the primary considerations when designing the bolting assembly. Many rotodynamic bolts are subject to the process fluid of their respective pump and are subject to the same or more degradation than rotors, housings and other pumping components.

These bolts can be the hottest element in the pump and must often be constructed of a more resilient material than other pump components. These bolts are subject to tensional, axial and radial force in a relatively small cross-sectional area compared to other pump elements. All other decisions in bolt design must follow the material selection since every material has different guidelines.

Different bolt designs and geometries have varying strengths and weaknesses and should be chosen depending on the pump application and service duty. Socket head cap screws (SHCS) are a common bolt design in pumping applications. The SHCS bolt heads have a smaller diameter compared to similar hex head bolts and are therefore easily incorporated into almost any assembly. Due to their widespread use, these bolts are available in a near infinite number of combinations of diameters, lengths, grades and materials.

Hex head screws and bolts, particularly flanged hex head screws (FHHS), can also be used with success in many pumping applications. The FHHS bolts incorporate a flange that distributes the pressure where the bolt head sits. The flange design can prevent loosening in cases where a SHCS bolt will back out of the threaded hole and potentially shear. FHHS bolts are less common and may not be suitable for a pumping application depending on the chemicals and other elements present in the process fluid. The service duty of the pump must also be kept in mind. Reversibility and run time per day impact the bolts needed for rotodynamic pumps.

The application of a threadlocking product to the rotodynamic bolt threads is often necessary to prevent the bolt from rotating separately from the pump components. The manufacturer’s instructions must be followed to fully generate the strength of the threadlocker. These products may require up to 72 hours to cure depending on substrate material, bond gap, temperature or other factors. Threadlockers have been shown to be one of the most effective methods of reducing overall bolt loosening or relaxation.

Every component of the bolting assembly must be evaluated to ensure it is increasing the lifespan and ability of the bolt. Often these decisions can go against conventional wisdom. Components such as lock washers act as plain washers once they are fully torqued and flattened and their locking ability becomes nonexistent.

Belleville washers are also commonly misused. They are conical spring washers that provide a tension load on the head of the bolt. They are best used for providing a constant axial load on a bolt and should not be used in locking applications. The Belleville washers may aid in bolt loosening when subjected to vibration and a radial load.1

Most people assume that a stronger—therefore higher grade—rotodynamic bolt will always last longer. But the bolt’s lifespan is not only affected by the strength. Bolt manufacturers rated different grades of bolts at different torques for a reason. The bolt recommended torque value helps the bolt to hold tension properly and ensures that the bolt does not loosen after installation.

The pump assembly benefits from using a lower grade bolt that can be torqued to its proper recommended value to maintain the rotodynamic assembly.