What You Need to Know About Bearing Oil

Most pump bearings fail long before their design life span. The American Petroleum Institute (API) typically requires a minimum bearing life (L10) of 25,000 hours, and ANSI B73.1 specification for horizontal ANSI pumps specifies a minimum L10 bearing life of 17,000 hours at maximum load and rated speed. Prudent end users frequently request bearings with more than 40,000 hoursL10, but most bearings do not reach that many hours of operation before failure.

This premature failure rate is typically the result of contamination of the oil not a fault of the bearing or pump manufacturer. Dirt, wear particles and other foreign debris as well as improper bearing installation procedures can contribute to contamination that leads to reduced bearing life.

Other forms of contamination include heat and air in the form of air entrainment and aeration. Increased levels of heat and air lead to increased oxidation rates.

One of the most common sources of contamination, however, is water, which is often introduced because of improper storage and handling. During pump operation, water can leak into the bearing housing from external sources such as area wash down, spray from failed mechanical seals (or packing) or leaks from equipment near or above the pump. Another common method of water introduction is condensation through machine aspiration (moisture laden air is drawn in due to pressure differentials).

For example, a pump running steady state at a given temperature above ambient for five days is shut down on Friday at 4 p.m. As the pump cools, the ambient air is drawn into the bearing housing where it cools and the moisture condenses, releasing the entrained water into the housing where it mixes with the oil. 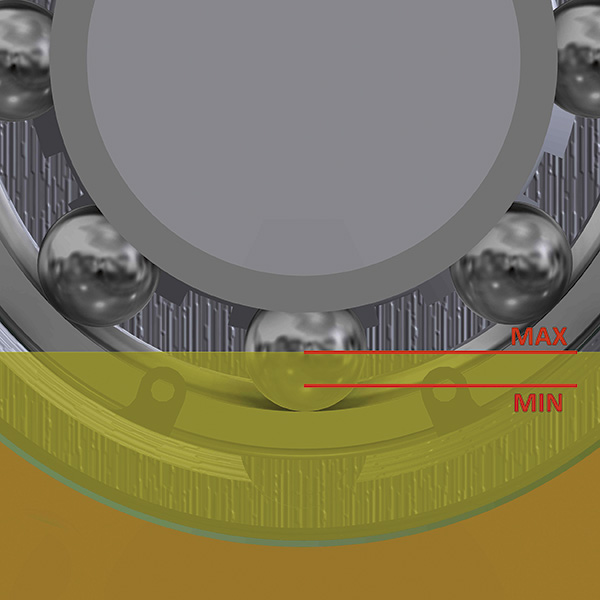 Figure 1. Oil level on bottom ball of the bearing (Graphics courtesy of the author)

Because water in the oil is invisible at low levels, a lab should test the oil using the Karl Fisher method or the end user should conduct a simple "sizzle test" in which the oil is quickly subjected to a hot surface temperature of 250 to 300 degrees F. A hot plate is commonly used, but a metal spoon or aluminum foil with a butane lighter can also be used. If more than 800 to 1,000 PPM water is present in the oil, a sizzle sound can be heard when the oil temperature exceeds 212 to 220 F. If the oil sizzles, too much water is present in the oil. Because the sizzle test can have dangerous side effects, always check with plant safety procedures before conducting the test.

Companies that strive for longer mean time between failures (MTBF), mean time between repairs (MTBR) and improved plant reliability select their oil or grease based on equipment requirements and properly match them with the oil properties. They also store and allocate the oil using controlled and clean methods.

I have seen end users store oil drums upright, outside and unprotected with an open bung. I have also seen mechanics draw oil from drums into used paper coffee cups or soft-drink cans. When confronted, they reply, "That is the way we have always done it, and we are not having any bearing or oil problems," or "I washed out the container first."

If a pump's bearings are not lasting three to eight years, the plant's equipment lubrication practices should be questioned. Check with your oil supplier, or consult articles, books and other publications that discuss these subjects. The October 2006 issue of Pumps & Systems magazine explores this topic, and I highly recommend any books and technical papers on this subject by Heinz Bloch, Alan Budris or Rojean Thomas.

Selection of a bearing design for a specific service will, to a large degree, determine how it is lubricated. Depending on the pump speed, type of service, horsepower (HP) range and size, different types of bearings are available.

Methods and designs that are acceptable for ANSI specification pumps may not be acceptable for API, process, marine and power generation applications where HP can often exceed 70,000 brake horsepower (BHP) with speeds in excess of 6,000 rpm.

Because most end users at the high end of the HP and speed spectrum are aware of oil types, best practice lubrication techniques and bearing selection, this article will examine the middle and lower range.

Oil splash lubrication may be the most common method of bearing lubrication for horizontal pumps from 5 to 250 BHP. The oil is contained in a sump in the housing with the bearings. The machine is designed so the oil level for proper operation is at the middle of the bottom ball in the bearings.

Oil levels higher than the middle of the lowest ball bearing will have negative consequences and increase oil temperature and air entrainment. Both of these factors accelerate the oil's oxidation rate and reduce oil and bearing life. For splash lubrication, the oil level should touch the very bottom of the bottom ball in the bearing. If the oil drops below the ball or the outer race, the bearings could be damaged. If the level is too low, the bearing could experience temperature runaway, which is when the bearing gets hot quickly and is permanently damaged.

Variations on splash lubrication design include flingers, discs, oil rings and several other methods/types of lubrication.

One note of caution is that rings must be close to perfectly concentric, and the pump shaft must be level for the rings to work correctly. I have rarely seen the ring remain round, especially after the first maintenance overhaul. If not initially leveled, the pump may not remain level either. Problems may also arise if the design ratio of ring to shaft diameters is not correct. Critical speed can also be an issue. While the rotor may be above the first critical speed, the oil ring speed is typically at 50 percent of the shaft speed and may be rotating close to critical frequency.

Other types of lubrication include grease (with ball bearing variations of shielded/unshielded and sealed), oil mist, oil purge and forced oil feed (oil is pumped to the bearings for the larger HP pumps and some marine applications).

Most motor bearings are grease-lubricated, so it is important to know if they are open, shielded, sealed or a combination of these options. If they are shielded on one side, the best practice is to place the shielded side toward the grease fitting. I have seen many end users who order pumps with greased bearings still add oil to the housing simply because the installation, operation and maintenance manual (IOM) did not specifically say not to. Running the pump with greased bearings and splash oil lube at the same time is an incorrect solution.

The first oil change should be conducted at a shorter interval than subsequent changes to eliminate the contamination that occurs from startup and run-in operations. Most ANSI and some API pump manufacturers will state that the first change should come at 200 operating hours and subsequent changes at 2,000 hours or 3 months, whichever comes first. The intervals depend on operating temperatures and how contamination ingress is managed. Some operations will require more frequent oil changes, and others can operate for several years. Oil sample analysis and experience will aid in decisions regarding oil change intervals.

You would never drive a car that many miles without changing the oil.

The old method was to also vent the housing, but that was a source of contamination. The vents should be eliminated or, at the very least, used with a desiccant breather or an equalizer expansion chamber.

For more than a hundred years, lip seals have served the industry well. While they are simple and inexpensive, end users should consider replacing them with the more modern and efficient bearing isolators. Lip seals, regardless of the manufacturer, will, at best, only last about 3,000 hours in service. After approximately four months of operation, they will fail and potentially allow water or other contaminants to enter the bearing housing. The advent of the bearing isolator is what has allowed many pump manufacturers to extend their warranties from one to five years. The modern bearing isolator will, on average, last eight to 10 years and, if properly managed, even longer. During that time, the isolator will not wear/score a groove on the shaft and, for the most part, will prevent the introduction of contamination to the bearing housing at both operating and static conditions. Bearing isolators can be of the labyrinth or contacting face design, and there are numerous designs and manufacturers. 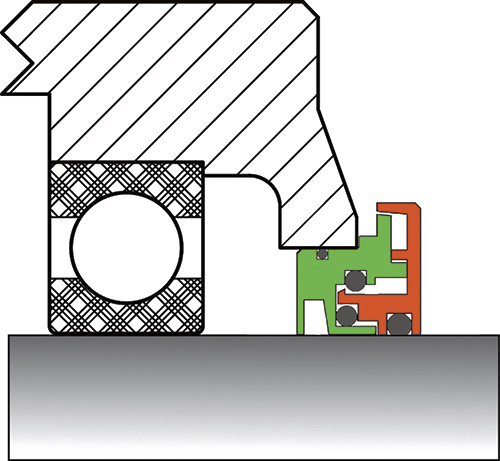 The majority of bearing isolators are orientation specific; they normally have a drain hole (expulsion port) that should be in the 6 o'clock position. If the port is not at the correct position, the isolator will not perform properly. For some types of ANSI pumps, the outboard isolator will have numerous evenly spaced expulsion ports because the housing it fits into can be rotated when setting the impeller clearance. The final position will not be a fixed parameter as it is in other designs, so the isolator incorporates numerous ports to satisfactorily operate in any position.

One of the most common problems I see in the field beyond not reading the instructions is the overfilling of the bearing housings with oil. Bearing isolators (labyrinth style) will purge any excess oil from the housing. A common misconception is that the isolator has failed, but it is just doing its job. The oil will continue to be expelled until the level is below the expulsion port.

Setting the automatic oiler level incorrectly is the next most common mistake in the industry. Please refer to the manufacturer's instructions for the proper procedure. Hint: The level in the oil bulb is not the level of the oil in the pump housing nor is it the centerline of the connecting pipe.

Centrifugal pumps are shipped without oil in the bearing housings; consequently, the end user must ensure that oil is in the housing before startup. The oil must be of the proper viscosity. The oil viscosity selection is based on expected temperatures of the oil and bearings. The oil supply source should be clean, and the oil must remain uncontaminated between changes. In addition, the oil must be at the proper level in the bearing housing. Too much oil is just as bad, if not worse, than too little oil.

Most bearings fail because of contamination from water and/or heat. Labyrinth or magnetic face type seals (bearing isolators) can help prevent water introduction and contamination. Desiccant breathers or automatic oilers that vent to the housing in lieu of the atmosphere can also reduce the introduction of water.

Jim Elsey is a mechanical engineer who has focused on rotating equipment design and applications for the military and several large original equipment manufacturers for 43 years in most industrial markets around the world. Elsey is an active member of the American Society of Mechanical Engineers, the National Association of Corrosion Engineers and the American Society for Metals. He is the general manager for Summit Pump, Inc., and the principle of MaDDog Pump Consultants LLC. Elsey may be reached at jim@summitpump.com.