A large American energy company wanted a new data collection system to be integrated into its site historian along with process trending software to better diagnose system-related issues that can lead to maintenance issues.

Thanks to the help of an aftermarket service company, the energy company combined multiple sources of data and can now view complex mechanical vibration phenomena in parallel with plant process data. By comparing the two sets of data side by side, plant personnel will correlate process conditions with mechanical vibration data.

IMAGE 1: Each sensor provides useful machine condition data and timely alerts if alarm thresholds are exceeded. The data is relayed through a collection gateway to the server. (Images courtesy of Hydro, Inc.)

The service provider’s history of pump and rotating equipment knowledge helped to provide actionable analysis of pumps and other rotating equipment health—and a mechanism to provide additional engineering solutions to complex problems. Combined with the energy company’s focus on reliability and a history of maintaining their equipment, this system provided an improved method of data collection and analysis.

The major challenge, according to the energy company, was its inability to simultaneously see process trend data and vibration data. In addition, they previously had no digital mechanism to correlate multiple sources of machine data.

Machinery process data, such as pressure and power, is acquired through wired sensors in the plant. Those sensors speak to a main data acquisition system and are processed in the site historian. In parallel, vibration and temperature data had traditionally been collected in a route-based approach at a set interval for a given machine. The two sets of data had remained independent—making the analysis process more difficult.

The aftermarket company was asked to solve several problems. The first was to provide wireless sensors that could measure temperature and vibration with an analysis platform capable of detecting complex machine degradation and failure modes. The second was to provide an integration solution that would bring this new data set into the site historian for a direct comparison with other plant data.

This was a relatively simple solution that did not present any other challenges other than filtering the data to the needs of the energy company. Python technology was used as the specific API was provided to the energy company’s team, who then wrote a script to format the data and set the schedule to import data every hour. 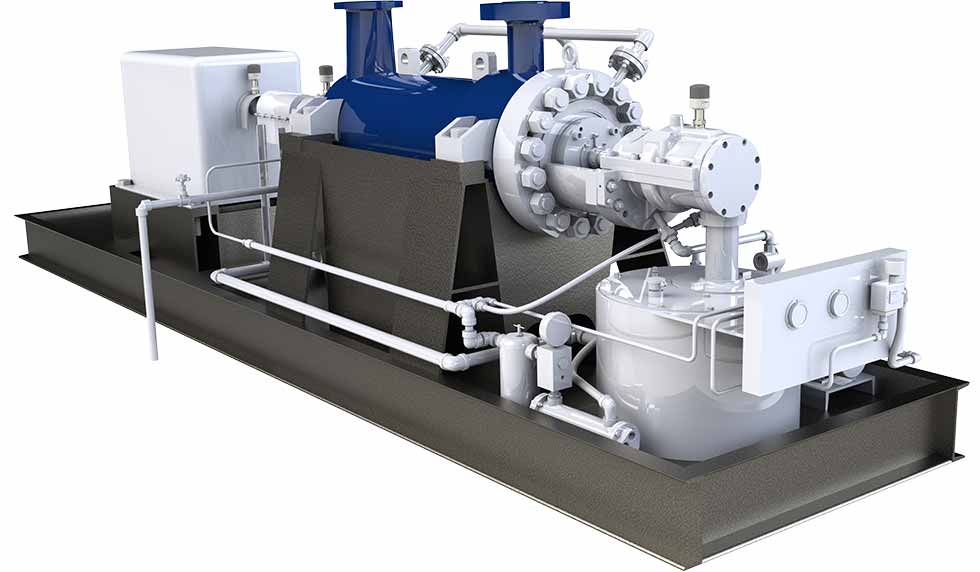 In many instances, equipment is operated at lower load conditions as the plant is required to produce less power. While lower load demands require less work from plant machinery, lower loads are also notorious for inefficient and damaging conditions for rotating machinery. This operation can be suboptimal in terms of overall net cost. By operating equipment away from its best efficiency point (BEP), expected maintenance costs increase either due to premature degradation of components or unexpected machine failure.

One of the first machines to be analyzed was the Unit 6 boiler feed booster pump machine train. Vibration data from the aftermarket company’s wireless system showed recurring periods of high vibration with a higher percentage of energy present at the vane pass frequency of the pump.

High vane pass frequency can be associated with several failure modes and operational modes, one of which is low flow recirculation. Low flow recirculation can result in increased levels of radial vibration resulting from the incidence angle of the flow exiting the impeller.

The physics of the hydraulic design are driving this radial vibration. The impacts of this increased radial vibration often cause premature degradation and failure of wear components such as mechanical seals and bearings. Operating at low flow rates for extended periods of time may, at the very least, increase the overall cost of ownership of a pump by requiring more frequent seal and bearing changes.

In addition, when a pump is in recirculation, there is an increase in internal pressure pulsations and the formation of high velocity vortices that result in cavitation. Cavitation damage can contribute to an increased pump overhaul repair cost.

The suspicion was that during periods of lower demand, particularly at night, the pump would be operated at a lower flow condition and, thus, back on its performance curve away from BEP.

After combining the data sets in their site historian, the vibration data was overlaid with pump discharge pressure (higher at low flow rates) and motor input power. Sure enough, the relationship confirmed the suspicions of plant analysts and the condition monitoring engineering team.

This approach to condition-based maintenance will allow plant reliability engineers to interface with plant operations to create an optimal maintenance plan for their equipment.

Ares Panagoulias manages the sales and engineering of IIoT wireless condition monitoring product and services at Hydro, Inc. He may be reached at apanagoulias@hydroinc.com. For more information, visit www.hydroinc.com/sensors.