However, a smart budget manager should ask these three questions before making adjustments.

1. How much energy is really saved?

Saved energy depends on the size of the pump and how much pump efficiency has degraded. Several years ago in “How Much Energy is Wasted When Wear Rings Are Worn to Double Their Value?” (Pumps & Systems, March 2007), we calculated that a large pump—30-inch double-suction impeller, 1,000-horsepower (HP) motor—would waste about $24,000 per year at nonstop operation because of doubled clearance. A typical ANSI pump is much smaller (with rare exceptions), and a 25-HP motor is probably the maximum for the majority of ANSI applications. Divide the two horsepower values and multiply by the annual savings, and the resulting savings is about $600 per year. 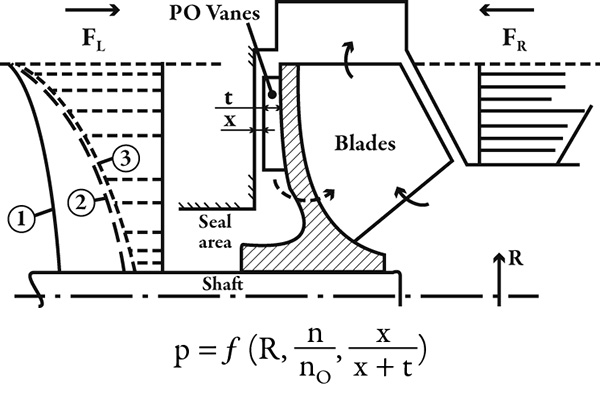 This savings is probably even less because pumps do not usually operate nonstop. A $300 savings is perhaps a more realistic number—and that is for an extreme case of clearance that has been worn to double the initial set value.

2. How difficult is the adjustment?

Given a $300 potential yearly savings, few managers would find it beneficial to adjust the front clearance. More likely, they would wait until other things needed to be changed, such as broken seals, failed bearings or couplings. The clearance would only be adjusted while the pump was in the shop. A field adjustment makes for a nice conversation topic at lunch but is hardly an innovation worthy of investment.

If clearance is estimated from the beginning, a pump design could probably be much simpler and less expensive by eliminating the complexities of the design-to-adjust features. A shim to set the clearance during assembly would be a simple, effective addition.

3. How do adjustments affect reliability?

Unfortunately, adjusting the front clearance comes with other costs—most important, reliability. The main reason to use pump-out vanes (POVs) is to lower the pump’s axial thrust and achieve better hydraulic balancing.

The axial thrust is the difference between the pressure on the back and front of the impeller. The December 2013 column explained the effect that POVs in an ANSI pump design had on clearance to the back wall and axial load. When POVs move too far from the back wall as front clearance is adjusted, the net load increases—putting more stress on the bearings.

The end user must ask the following question: How much longer will the bearings last at a higher load? The answer could directly affect the need to adjust—or not adjust—the impeller front clearance in the first place.

Dr. Nelik (aka “Dr. Pump”) is president of Pumping Machinery, LLC, an Atlanta-based firm specializing in pump consulting, training, equipment troubleshooting and pump repairs. Dr. Nelik has 30 years of experience in pumps and pumping equipment. He may be reached at pump-magazine.com. To learn more about this topic, visit pumpingmachinery.com/pump_school/pump_school.htm (video module #PVA-5).